A Primer on Biodiesel 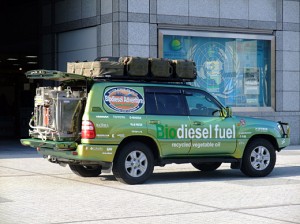 Biodiesel is a clean burning alternative fuel produced from domestic, renewable resources. The fuel is a mixture of fatty acid alkyl esters made from vegetable oils, animal fats or recycled greases. Where available, biodiesel can be used in compression-ignition (diesel) engines in its pure form with little or no modifications.

Biodiesel is simple to use, biodegradable, nontoxic, and essentially free of sulphur and aromatics. It is usually used as a petroleum diesel additive to reduce levels of particulates, carbon monoxide, hydrocarbons and toxics from diesel-powered vehicles. When used as an additive, the resulting diesel fuel may be called B5, B10 or B20, representing the percentage of the biodiesel that is blended with petroleum diesel.

Biodiesel is produced through a process in which organically derived oils are combined with alcohol (ethanol or methanol) in the presence of a catalyst to form ethyl or methyl ester. The biomass-derived ethyl or methyl esters can be blended with conventional diesel fuel or used as a neat fuel (100% biodiesel). Biodiesel can be made from any vegetable oil, animal fats, waste vegetable oils, or microalgae oils. There are three basic routes to biodiesel production from oils and fats:

There are a variety of oils that are used to produce biodiesel, the most common ones being soybean, rapeseed, and palm oil which make up the majority of worldwide biodiesel production. Other feedstock can come from waste vegetable oil, jatropha, mustard, flax, sunflower, palm oil or hemp. Animal fats including tallow, lard, yellow grease, chicken fat and fish oil by-products may contribute a small percentage to biodiesel production in the future, but it is limited in supply and inefficient to raise animals for their fat. Jatropha is a small pest- and drought -resistant shrub that is capable of being grown on marginal/degraded land and produces seeds that yield several times more oil per acre than soybeans.

Biodiesel can be blended in any proportion with mineral diesel to create a biodiesel blend or can be used in its pure form. Just like petroleum diesel, biodiesel operates in the compression ignition (diesel) engine, and essentially requires very little or no engine modifications because the biodiesel has properties similar to mineral diesel. It can be stored just like mineral diesel and hence does not require separate infrastructure. The use of biodiesel in conventional diesel engines results in substantial reduction in the emission of unburned hydrocarbons, carbon monoxide, and particulates. There are currently a large number of existing biodiesel production plants globally, and a large number under construction or planned to supply the growing global demand.

Among alternative feedstocks, algae holds enormous potential to provide a non-food, high-yield, non-arable land use source of biodiesel, ethanol and hydrogen fuels. Microalgae have been grabbing biofuel attention because on an acre-by-acre basis, microalgae can produce 100 to 300 times the oil yield of soybeans on marginal land and with salt water. Microalgae is the fastest growing photosynthesizing organism and is capable of completing an entire growing cycle every few days.

Salman Zafar is the Founder of EcoMENA, and an international consultant, advisor, ecopreneur and journalist with expertise in waste management, waste-to-energy, renewable energy, environment protection and sustainable development. His geographical areas of focus include Middle East, Africa, Asia and Europe. Salman has successfully accomplished a wide range of projects in the areas of biomass energy, biogas, waste-to-energy, recycling and waste management. He has participated in numerous conferences and workshops as chairman, session chair, keynote speaker and panelist. Salman is the Editor-in-Chief of EcoMENA, and is a professional environmental writer with more than 300 popular articles to his credit. He is proactively engaged in creating mass awareness on renewable energy, waste management and environmental sustainability in different parts of the world. Salman Zafar can be reached at salman@ecomena.org or salman@bioenergyconsult.com
View all posts by Salman Zafar →
Tagged biodiesel, Biodiesel Feedstock, Biodiesel in the Middle East, Biodiesel Production, biofuels, Biofuels in Middle East, Greases, Introduction to Biodiesel, Middle East, Vegetable Oils, Vehicle Fuel, Waste Oil, What is Biodiesel. Bookmark the permalink.

8 Responses to A Primer on Biodiesel