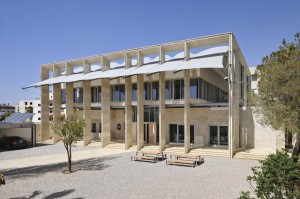 Green building rating systems are increasingly gaining attention in the building industry in the MENA region. During the last 15 years, there has been a regional trend in developing and applying green building ratings systems. In several countries such systems have been developed in an attempt to follow the international green movement. For example, the Pearl Building Rating System (PBRS) was founded in UAE in 2007, the Green Pyramid (GPRS) and ARZ Building Rating System in Egypt and Lebanon respectively were founded in 2008, the Edama was proposed in Jordan in 2009 and Qatar Sustainability Assessment System (QSAS) was founded in 2010.

The study, conducted in 2013, compared four rating systems (GPRS, SI 5281, QSAS and PBRS) and a cross analysis study was used to answer questions about the strength and weakness of the systems. The four systems use score point system for assessment. The four tools provide programs involving the building life cycle process – pre-design, design and post-design (occupation). There are many common criteria and categories between the four examined rating systems; such as limiting the consumption of energy and water in the building, improving the environmental quality in both indoor and outdoor, resources and material conservation, service quality, and site strategies. The four rating systems operate from an ecological foot print minimisation paradigm. At the same time, each rating system focuses on certain aspects more than the other ones according to the country’s local context. Surprisingly, there is no agreement on weighing the different environmental criteria. 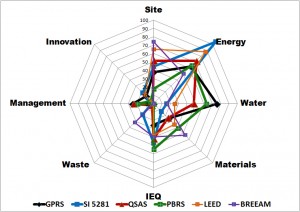 The study found that the examined rating systems are proposing theoretical models that needs to move to effective market implementation politically (government) and economically (NGOs & private sector). The rating systems require more adaptation to local and regional context. Rating systems should differentiate themselves from well-established rating systems.  For example, the study believes that water scarcity should be the most important category together with human wellbeing. Already LEED and BREEAM programs are considered the most fairly comprehensive in scope – from registration to calculation to building certification. In the case of the four rating systems, the initiation approaches were bottom down and not bottom up approaches.

Therefore, the uptake and market penetration is slow compared to LEED or BREEAM. In the four countries, there is no encouragement/engagement in the form of working out incentives or law enforcement to apply the four rating systems except for PBRS. In fact, each country in the region is looking to achieve those criteria individually. The entry of the LEED and BREEAM rating system into the Middle East property market coincided with increasing demand for regional and local ratings systems. As a result, different systems were developed under serious time pressure in the last ten years. The four compared systems are based on American and British standard. In the same time, there are currently no standardisation efforts working at local level to quantify and assess sustainability.

Green Building Councils in the Middle East will have a long way; they have to manage to position themselves as leaders promoting green buildings in the countries where they operate. By comparing and evaluating the four rating systems lesson could be learned and problem could be avoided. Therefore, the study author believes that a harmonised system within the Middle East would have distinctly better chances if the following issues are addressed:

Since the oil embargo of 1973, Western countries developed local codes and standards, which are revised annually, for the built environment. Those codes correspond to their context and are strongly linked to practice and buildings industry. However, in the four examined countries, the (b) local codes and standards are still not mature when compared to American or British ones. So there is a regulation problem on the institutional level. More importantly, (b) energy and water are heavily subsidized in most of the four countries.The comparison revealed that the certification rates are low and the feesstructure is very high (registration, certification, auditing).

Thus the whole political regulation landscape regarding resources efficiency is contradicting with the rating systems scope and objective. Therefore, it is important to address the (a) efficiency regulations and (b) subsidies policies on the institutional level and avoid the dependence on Western standards, codes and rating systems. This should be done through facilitating the adjustment and upgrading for the specification of environmental assessment factors in a dynamic, flexible and simple way.

Developing an assessment framework should be based on in-situ building performance research and technical knowledge. Technical rigour is very important in this case, for example setting benchmarks and measuring the performance. Furthermore, the investigated rating systems are located in hot climates, with scarce water resources which require a different approach and credits focus. Issues like solar protection, water conservation, life style, solar cooling and urban planning should be more strongly addressed in future developments. This includes advancing environmental footprint issues, like climate change.

The assessment framework should suite the local context of each country in the Middle East, depending on its culture, issues, stakeholders, practices and institutions. Surprisingly, SI 5281 is the only rating system that was written in a native language, thus it is essential for each country, to design its own indicators to serve its goals in local language. This includes the development of local criteria to quantify the social part of sustainability that includes tradition and culture.

Multi-stakeholders should participate in developing rating systems, since they require participative and collaborative work process. Experts, designers, elected officials, working group, agency players, and others should be introduced as key participants in this process. The building industry should be encouraged to get into sustainable track to achieve a real transformation, regarding water and energy. There is a need to link those rating systems to grass root initiatives rather than developing them within academia or elite practicing companies.

According to the study, the examined certification systems need strong adaptation to meet the needs of the Middle East regional climate, social, cultural, environmental and economic conditions. Also there must be a harmonisation effort between regional rating systems aiming to develop and implement a common, transparent regional building assessment methodology. Otherwise, there will be a proliferation of immature systems without accumulated and unifying experience.

There is still a long way before those examined systems examined become mature and widely usable.  Despite that the development of the examined rating systems is intended to facilitate the assessment of sustainable design in MENA; they fail to suit the local context culture issues, resources, priorities, practices and economic challenges. The GPRS, QSAS and PBRS systems neglect the interpretation of essential local sustainability measurements in their assessment set and normative standards. The study concludes that the existing rating system needs to increase the technical rigor and to put more weight on the most important categories, mainly water, IEQ, pollution and energy. The study suggests a number of recommendations to develop a harmonised green building assessment system in the MENA region. The usefulness of rating systems in the future depends on their flexibility and ability to measure the merits of buildings.

Note: The original version of the article can be viewed at this link.

4 Responses to Green Buildings Certification in MENA – Issues and Challenges