New Fines for Littering in Bahrain 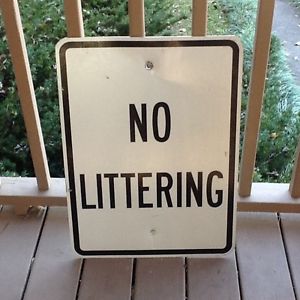 Littering is a common phenomenon both in urban and rural areas of Bahrain. Streets, sidewalks, parking lots, roads and highways are mostly covered with food wrappers, soft drink and water bottles, plastic bags, handbills, cigarette butts, tissues, papers etc. Litter has the potential to cause harm to human health, safety, welfare as well as the environment. Littering can be a fire hazard and it attracts pests and rodents. Litter also cause accidents on roads as drivers avoid litter on road. Litter also harm plants, vegetation and natural areas. The temptation to ‘litter’ is usually motivated by disrespect to the law and its enforcement as well as ignorance and arrogance in our attitude, thinking that municipalities will clean our mess.

There are several factors that may impact on littering behaviour including inconvenience and laziness, absence of ownership or pride for the area, feeling that someone else will pick it up, number, placement and appearance of litter bins at or near the site, absence of realistic penalties, enforcement of legislation, lack of social pressure and lack of knowledge of the environmental impacts of littering.

The local authorities in Bahrain have now taken cognizance of the situation. Now littering on Bahrain's roads could carry fines of up to BD300 if a new draft law is passed by parliament. The National Cleanliness Law was approved by the Capital Trustees Board last week and includes tougher punishments for dumping waste, leaving animal faeces on the streets, and disposing of medical or hazardous substances in public. The new law will give more judicial power to the municipal officials to penalize the offenders.

Under the existing law which is almost three decades old, offenders are fined only BD10 for littering. However, if the new rules are implemented, then fines for minor offences will range between BD100 and BD300 and for serious offences will be between BD500 and BD1,000.

Capital Trustees Board chairman has very rightly mentioned that ‘Dumping and littering have become a habit for a number of people and it needs immediate action, especially with fines not matching the offences. The fines once imposed will be monitored by the Capital Trustees Authority, and Bahrain's three other municipalities.

Thus, dumping and littering whether on main roads or neighborhoods, on pavements or alleys, at beaches or wasteland are prohibited. Also, dumping anything that may obstruct traffic or prevent people from movement is illegal whether it is garden waste, construction waste, furniture, vehicles or any other materials.

Litter can be conquered. People can make a difference. It is our responsibility to clean up the litter in an ‘earth-friendly manner.’ Clean communities have a better chance of attracting new business, residents and tourists. There is no reason for any of us to litter because we can always find a litter bin to throw the trash away.

Let us set an example for others, especially children, by not littering and by carrying a litterbag in our vehicle, securely covering trash containers to prevent wind or animals from spreading litter, when visiting parks and recreation areas make sure to leave the area clean for the next person to enjoy and restricting the distribution and disposal of handbills.

2 Responses to New Fines for Littering in Bahrain