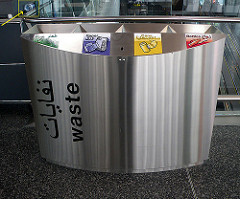 On arriving a few years ago from a town in the UK that boasts a university course in waste management, and a very efficient weekly recyclable waste collection from our houses, I was a bit shocked, like many Europeans by how difficult it was to recycle in Doha. Having had the moral obligation to recycle drummed into me since I was quite young, I felt guilty throwing away all my waste into one bin, destined to fill up a huge smelly hole in the desert, where it would take a long time, if not forever to biodegrade.

I was determined to find a place to recycle and was happy when I found out that the park of Dahl al Hammam, just 5 minutes’ drive from my villa, had 7 different large recycling banks. These have to be emptied into trucks daily, due to their enthusiastic filling, mostly by Europeans who make the effort to come from many different compounds that are further away than my own. Waste materials can be sorted into two banks for paper and cardboard, two banks for metal and plastic, two banks for glass and another one for second hand but good quality clothes for charity.

I have been trying to determine over the last four years if all our conscientious efforts to sort, collect and transport our preciously gathered waste materials have been in vain or not. Are they actually taken to factories where they are recycled into new products or not? I see a lot of small recycling bins in educational institutions, which seem to be more of an experiment to observe human behaviour, and to get people to start separating the things they throw away, rather than a real improvement in recycling. Often all separated waste from these is taken away and put in one bin, and then taken to the normal landfill!

I asked a security officer in Dahl al Hammam, and he reassured me that the materials from the banks are indeed taken to the sorting plant in Al-Messaieed. I am still a little unsure.  In Al-Mesaieed there is a very large Domestic Solid Waste Management Centre (DSWMC). The plant has been online since 2011 and of the waste they receive, 95% is recycled or converted into energy.  Organic material is composted at what is the world’s largest composting plant; plastics and metals recycled and other material incinerated, with the heat generated used to produce 40 MW of electricity. However this $550M plant by 2013, two years after its opening, had already reached its processing capacity of 2300 tonnes daily, for sorting rubbish.

In 2012 a staggering total of 871000 tonnes of solid household waste, or 28 000 tonnes per day were produced by Qatar, a rise of 7% from 2011, increasing at a rate exceeding Qatar’s Government expectations and preparations. The per capita generation of waste in Qatar of 1.6kg to 1.8kg each day is about four times that of Hong Kong and is one of the highest globally. Besides this it has been estimated that 5000 tonnes of waste are produced daily by industry and construction. In 2011 only 8% of waste was recycled.

Qatar unfortunately has the second largest ecological footprint on the planet, according to the World Wide Fund for Nature’s report in 2014, a substantial contribution to this is the damage to ecosystems and the carbon footprint incurred through all its imports. Being a small peninsula on the edge of the hot and usually arid Arabian Desert, Qatar has to import nearly everything that it needs from far and wide. It would like to be more independent and resilient and is working in that direction. The fall in the price of oil earlier this year, and therefore in the income of Qatar, has added pressure now to reduce expenditure, and to better balance the books.

One way it can fulfil these aims is to become more efficient in its use of resources. If it can reuse many of the materials from the products that it uses, then it will reduce the need to import more goods, thereby cutting costs, carbon emissions and ecosystem damage. This it can do this through applying the famous ‘reduce, re-use, and recycle’ motto. A famous English saying is ‘waste not want not’, which means that if you are not wasteful in times of plenty, and make maximum use of everything, then you will have enough left for times of difficulty. The Holy Quran also says, ‘O Children of Adam! Wear your beautiful apparel at every time and place of prayer. Eat and drink but waste not through excess, for Allah loves not the wasters’(7:31). The Qatar National Development Strategy 2011-16 aimed to boost waste recycled to 38% by 2016, a definite challenge in the face of rapid development and population increases.

One challenge in Qatar is mixed nature of most of the rubbish. This is partly due to the lack of accessible information about existing collectors of sorted recyclable materials. Another is the insufficient awareness in the most of the population about the importance of not dropping litter, reducing wastage and separating materials. An issue being addressed is the currently insufficient infrastructure to sort and separate mixed rubbish- which represents the majority of rubbish collected today. Also factories that process used materials to improve their quality are rare, and few Qatari industries utilise such salvaged materials as an input. All sectors need to work together concurrently to improve awareness and education, and the sorting, collection and processing of useful materials extracted from waste, to utilise them for the manufacture of new products in Qatar.

To facilitate these, a constantly updated website could be set up to link companies, organisations and institutions, and make them aware of each other’s waste outputs. According to the Qatar Development Bank, the revenue potential from solid waste could be as high as QR 2.24 billion with QR 979.16 million coming from recycling household waste. Hopefully more bright sparks in Qatar will soon spot the great business opportunities available from recycled materials, to help Qatar to be more self-sufficient and reduce Qatar’s ecological footprint.

Note: The article is being republished with the kind permission of The Peninsular Qatar. The original article can be read at this link

Luzita Ball has had a lifelong interest in gardening, nature conservation and sustainable environmental management. In 1992, she completed a BSc. degree in Agroforestry at Bangor University College of North Wales, UK; in 1993 a course in Permaculture Design, and, in 1998, her MA in Urban Regeneration at the University of Westminster, London, UK. She has since been involved in environmental education with many different organisations and institutions, directly as an educator of various age groups, through radio and television discussion programmes, permaculture projects, and writing educational materials and articles, currently contributing articles to the Peninsula Qatar newspaper.
View all posts by Luzita Ball →
Tagged Composting, Ecological Footprint, garbage, Organic Waste, Qatar, Recycling, Rubbish, Solid Waste, Trash, waste, Waste Management. Bookmark the permalink.