The term ‘Biofuel’ refers to liquid or gaseous fuels for the transport sector that are predominantly produced from biomass. A variety of fuels can be produced from biomass resources including liquid fuels, such as ethanol, methanol, biodiesel, Fischer-Tropsch diesel, and gaseous fuels, such as hydrogen and methane. The biomass resource base for biofuel production is composed of a wide variety of forestry and agricultural resources, industrial processing residues, municipal solid wastes and urban wood residues.

The agricultural resources include grains used for biofuels production, animal manures and residues, and crop residues derived primarily from corn and small grains (e.g., wheat straw). A variety of regionally significant crops, such as cotton, sugarcane, rice, and fruit and nut orchards can also be a source of crop residues. The forest resources include residues produced during the harvesting of forest products, fuelwood extracted from forestlands, residues generated at primary forest product processing mills, and forest resources that could become available through initiatives to reduce fire hazards and improve forest health. Municipal and urban wood residues are widely available and include a variety of materials — yard and tree trimmings, land-clearing wood residues, wooden pallets, organic wastes, packaging materials, and construction and demolition debris.

Globally, biofuels are commonly used to power vehicles, heat homes, and for cooking. Biofuel industries are expanding in Europe, Asia and the Americas. Biofuels are generally considered as offering many priorities, including sustainability, reduction of greenhouse gas emissions, regional development, social structure and agriculture, and security of supply.

First-generation biofuels can be used in low-percentage blends with conventional fuels in most vehicles and can be distributed through existing infrastructure. Some diesel vehicles can run on 100 % biodiesel, and ‘flex-fuel’ vehicles are already available in many countries around the world.

Second-generation biofuels are derived from non-food feedstock including lignocellulosic biomass like crop residues or wood. Two transformative technologies are under development. 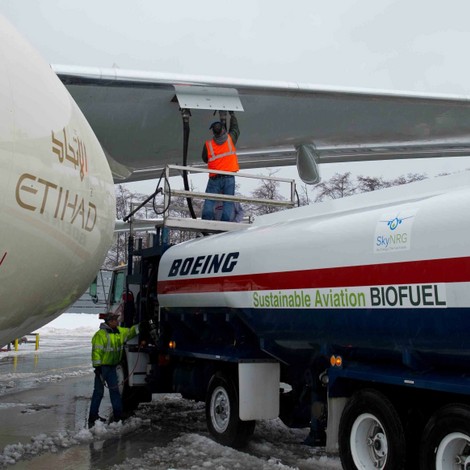 Etihad Airways flight from Seattle to Abu Dhabi in January 2012 was the first in the Middle East to be powered by sustainable biofuel.

Third-generation biofuels may include production of bio-based hydrogen for use in fuel cell vehicles from microalgae. The production of Algae fuel, also called Oilgae is supposed to be low cost and high-yielding – giving up to nearly 30 times the energy per unit area as can be realized from current, conventional ‘first-generation’ biofuel feedstocks. Algaculture can be an attractive route to making vegetable oil, biodiesel, bioethanol and other biofuels.

Salman Zafar is the Founder of EcoMENA, and an international consultant, advisor, ecopreneur and journalist with expertise in waste management, waste-to-energy, renewable energy, environment protection and sustainable development. His geographical areas of focus include Middle East, Africa, Asia and Europe. Salman has successfully accomplished a wide range of projects in the areas of biomass energy, biogas, waste-to-energy, recycling and waste management. He has participated in numerous conferences and workshops as chairman, session chair, keynote speaker and panelist. Salman is the Editor-in-Chief of EcoMENA, and is a professional environmental writer with more than 300 popular articles to his credit. He is proactively engaged in creating mass awareness on renewable energy, waste management and environmental sustainability in different parts of the world. Salman Zafar can be reached at salman@ecomena.org or salman@bioenergyconsult.com
View all posts by Salman Zafar →
Tagged Algae Fuel, Aviation Fuel, biodiesel, bioethanol, biofuels, biofuels feedstock, Biofuels in Middle East, definition of biofuels, Etihad Airways, Feedstock for Biofuels, first generation biofuels, Middle East, oilgae, second generation biofuels, third generation biofuels, Types of Biofuels, What are Biofuels. Bookmark the permalink.

5 Responses to What are Biofuels