Women and the Environment in Arabia 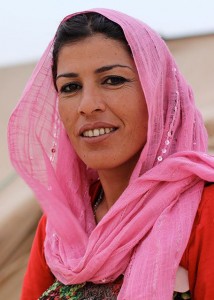 One of the most significant phenomena in the last decades is recognition of women rights to achieve sustainable development; many international agreements reflected this recognition, including Rio Declaration in 1992, which stresses the point of the centrality of the full women participation to achieve environmental sustainability. The UN Conference on Sustainable Development in 2012 has acknowledged the importance of gender equality and women empowerment, the CBD identifies the integration of women right in biodiversity conservation as intrinsically vital. Linking gender equality and sustainable development is not only important for ethical and moral reasons, but also because achieving gender equality as human rights of women is prerequisite of a fair and sustainable globe and future.

Increasingly, achievement environmental sustainability is recognized as central to pursue development goals. It`s crucial that gender equality —a human right—is central to this pursuit. Worldwide, there is a perception that women are closer to nature than men, as women interact directly and more intensively with the natural surroundings more than their counterparts’ men, which produced their profound experience, understanding and knowledge about the environment. Many studies on women and environment have shown that women are significant role player in natural resources management and ecological preservation. Women have served as farmers, water and firewood collectors and scientists with more respective and caring attitude.

Women in Agriculture and Plant and Soil Conservation

Globally, women produce around half of all the grown food, women`s roles in agriculture include: planting, cultivation, production, weeding, distribution, harvesting and storage, women are also involved in animal farming such as rearing poultry and goat. Some examples of women role in agriculture in Arabia include rural women in the Jordan Valley, who have proved themselves in agricultural work and is now irreplaceable in various agricultural operations. In addition, women have participated in and led soil and plant conservation projects. A role model is the Royal Botanic Garden (RBG) of Jordan, led by its founder HRH Princess Basma bint Ali. The RBG aims to preserve plants and ecosystems, and promote biodiversity research and environmental education in Jordan.

In many areas of the Arab world, natural resources, such as firewood, are the main source of energy for domestic consumption. Unfortunately, the extensive use of these sources has led to forests degradation and air pollution. At the same time, women are the main contributor in forest management through planting and protection. A good example is the campaign organized by the APN, represented by its President Razan Zeater, which has planted more than two million trees in Jordan and Palestine.

Around the Middle East, women constitute the main group of direct users of water for household consumptions. Therefore, they are a mainstream interest group in water management to provide and safeguard their own water resources. Women involvement in water management is growing up, but not yet receiving the attention it deserves. To fill the gap, many programs are launched to empower women at all levels including research. Dr. Malak AlNory, a scientist and a winner of Ibn Khaldun fellowship, researched the supply chain for water in Saudi Arabia and was the first Saudi woman presented her paper at the IDA Congress in 2013.

Worldwide, many people lack access to modern, clean energy, which has a huge impact on general quality of life. Rural women devote much of their time as fuel gatherers. Additionally, women work on projects to produce energy. An excellent model is the Jordanian brave Bedouin Rafea, who decided to challenge gender roles in her Bedouin community and followed her aspirations to light up her underprivileged village by enrolling in a solar program in India. Rafea has not only become the first female solar engineer in Jordan, but she has also set up 80 small-scale solar systems, helping her village to become solar-powered. Today Rafea is a role model, an elected leader and training many others on how to use sustainable energy.

Despite the challenges, this is a time of great opportunity for Arab women.  Worldwide, there are many examples of alternative pathways that move towards environmental sustainability and gender equality synergistically, which means respect for women knowledge, capabilities, rights and entrepreneurship, while ensuring that roles are matched with rights, control over resources and decision-making power.

One Response to Women and the Environment in Arabia