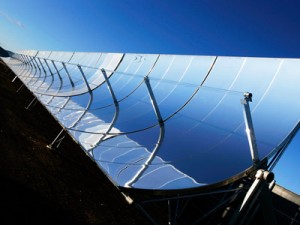 Morocco, being the largest energy importer in North Africa, is making concerted efforts to reduce its reliance on imported fossil fuels. Renewable energy is an attractive proposition as Morocco has almost complete dependence on imported energy carriers. Morocco is already spending over USD 3billion a year on fuel and electricity imports and is experiencing power demand growth of 6.5 per cent a year.

The National Energy and Energy Efficiency Plan was launched in 2008 which aims to develop renewable energy to meet 15 percent of the country’s energy demand and to increase the use of energy-saving methods.  According to the Moroccan Ministry of Energy and Mining, the total installed capacity of renewable energy (excluding hydropower) was approximately 300MW in 2011.

The Moroccan Government has already achieved its target of supplying around 8% of total primary energy from renewables by 2012 which includes energy generation, conversion and distribution. Morocco is planning USD 13billion expansion of wind, solar and hydroelectric power generation capacity which would catapult the share of renewables in the energy mix to 42% by the year 2020, with solar, wind and hydro each contributing 14%.

Morocco has launched one of the world’s largest and most ambitious solar energy plan with investment of USD 9billion. The Moroccan Solar Plan is regarded as a milestone on the country’s path towards a secure and sustainable energy supply. The aim of the plan is to generate 2,000 megawatts (or 2 gigawatts) of solar power by the year 2020 by building mega-scale solar power projects at five location — Laayoune (Sahara), Boujdour (Western Sahara), Tarfaya (south of Agadir), Ain Beni Mathar (center) and Ouarzazate — with modern solar thermal, photovoltaic and concentrated solar power mechanisms.

The first plant, under the Moroccan Solar Plan, will be commissioned in 2014, and the entire project is expected to be complete in 2019. Once completed, the solar project is expected to provide almost one-fifth of Morocco’s annual electricity generation. Morocco, the only African country to have a power cable link to Europe, is also a key player in Mediterranean Solar Plan and Desertec Industrial Initiative. The Desertec Concept aims to build CSP plants to supply renewable energy from MENA region to European countries by using high-voltage direct current (HVDC) transmission lines.

In 2010, the Moroccan Agency for Solar Energy (MASEN), a public-private venture, was set up specifically to implement these projects.  Its mandate is to implement the overall project and to coordinate and to supervise other activities related to this initiative. Stakeholders of the Agency include the Hassan II Fund For Economic & Social Development, Energetic Investment Company and the Office National de l’Electricité (ONE). The Solar Plan is backed by Germany, with funding being provided by German Environment Ministry (BMU) and KfW Entwicklungsbank while GIZ is engaged in skills and capacity-building for industry.

The Ain Beni Mather Integrated Solar Thermal Combined Cycle Power Station is one of the most promising solar power projects in Africa.  The plant combines solar power and thermal power, and is expected to reach production capacity of 250MW by the end of 2012. African Development Bank, in partnership with the Global Environment Facility and Morocco’s National Electric Authority (ONE), is financing approximately two-thirds of the cost of the plant, or about 200 million Euros.

Ain Beni Mather plant, which is now supplying electricity to the Moroccan grid, uses a cutting-edge design, combining a large array of 224 parabolic mirror collectors concentrating sun energy and boosting the steam output needed to produce electricity. This area enjoys abundant sunshine and has enough water to cool the power station and clean the solar mirrors. It is close to both the Maghreb-Europe Gas Pipeline and the high voltage grid that will help to transmit the generated power.

The 500MW Phase-One Solar Power Complex at Ouarzazate is the world’s largest solar thermal power plant. To be built with investment of an estimated Euros 2.3 billion, the project is the first one to be implemented under the Moroccan Solar Plan. The Ouarzazate Solar Complex, with a total capacity of 500 MW, will come on-stream in 2015 and produce an estimated output of 1.2 TWh/year to meet local demand. The first phase will be a 160-MW parabolic trough facility while photovoltaic modules and CSP towers will be used in later phases.

6 Responses to Solar Energy in Morocco