A solar pond is a three-dimensional, open-air pit, filled with water endowed with special properties. It receives solar energy through insulation, then the trapped heat is extracted from it from the water lying at the bottom of the pond. When solar energy falls onto the pond, it heats the water, splitting it into three sections: the first section is the uppermost layer, or Surface Zone, containing fresh water with a low level of salinity. This owes to the fact that salts gather at the bottom.

The second layer is the middle layer, called the insulating layer or Insulation Zone, whose salinity is greater than that of the surface level. The most important layer, though, is the bottom or lowest layer, known as the Storage Zone. This is the layer which retains solar energy and at which the extraction of energy is possible. This saturated layer is between approximately one and two metres thick, whereas the pond is generally two or more metres deep. 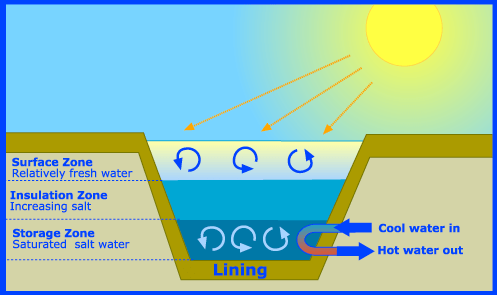 When the water of any Solar Pond gathers heat, it expands, becomes less dense, and rises. As soon as it reaches the pond’s surface, is loses its heat to the air as water vapour or by convection currents. The coolest water, which is considered the densest and heaviest, changes places with warm water which has risen to the surface, thus creating a natural carrying movement which mixes up the water and disperses the heat energy.

Solar Ponds provide the simplest technique for transforming the sun’s energy into solar power, which can be extracted for different purposes. Solar Ponds are unique in their ability to gather and store energy simultaneously. It is known that the cost of Solar Ponds per unit area are less than any other current popular solar energy collector, as well as the fact that the continuous fluctuations in oil prices in recent times have pushed many individuals and organisations to look for other, cheaper, renewable sources of energy.

Similarly, the warm water which we get after extracting the pond’s heat can then be put to multiple industrial uses and to heating greenhouses in or around the Dead Sea region when the winter frosts set in. Solar Ponds can be used in all climates, as long as there is lots of sun, and even if the pond froze over, it would still be able to generate energy as it is saturated with salts.

For an efficient, energy-generating Solar Pond to be set up, the following are needed: a relatively large area of low-cost land, water with high salinity and lots of sunshine. All these prerequisites are abundant in the Dead Sea region, which is the lowest and saltiest body of water in the world. Solar Pond system in the Dead Sea will help in large-scale energy storage and should be seen as an innovative step in the field of energy production and development in Jordan.

Solar Pond in the Dead Sea

In order to extract heat from the water of the Dead Sea, a small, square Solar Pond, 1.25 metres deep and 2.0 metres wide was designed as a test by Hashem al-Balawneh, an engineering student from Jordan, under the guidance of Dr. Khaldun al-Wahoosh. This solar pond was constructed in the Dead Sea region, at the coordinates 0 20 30 N, 0 30 35 E. Heat is prevented from escaping via convection by the Dead Sea water’s specific salinity, as well as by the addition of a group of Sodium Chloride, Magnesium Chloride and Sodium Bicarbonate salts (NaCl, MgCl₂ and NaHCO₃), which are also extracted from the Dead Sea.

Solar Ponds in the Dead Sea have a certain characteristic which allows them to keep heat energy, and that is the increase in salinity with increased depth. Accordingly, density also increases with depth, forcing the warm water to stay lower down because of the salts. Next, the heat which the water has absorbed in the last, salt-saturated layer whose temperature can reach between 85-90°C – moves turbines, thus generating clean, renewable, environmentally-friendly electrical energy.

Katie Holland graduated from Durham University in 2015 with a degree in Arabic and French, having also studied Persian. Currently working in London, she hopes to develop a career that uses her knowledge of Arabic and the Middle East, alongside pursuing her various interests in the arts.

Ola Almashagbeh is an environmental activist with BSc degree in Land and Water Management from Hashemite University (Jordan). She has been involved in many environmental initiatives since her University days. Ola has volunteered with Jordan Greeners Team as an assistant of director for internal affairs, and also associated with EcoMENA as a volunteer.
View all posts by Ola Mahmoud Almashagbeh →
Tagged Dead Sea, Heat, How Does a Solar Pond Work, Insulation, Salinity, Significance of Solar Ponds, Solar Pond, Water, Working Principle of a Solar Pond. Bookmark the permalink.

2 Responses to Introduction to Solar Pond