The Clean Development Mechanism (CDM) is an extremely simple concept. Companies in developed economies can continue with their polluting ways so long as they pay for reductions in greenhouse gas emissions elsewhere in the world. Substitute Egypt, Libya, Sudan, Zimbabwe and a string of other African countries for ‘elsewhere’.

CDM may not figure highly on the financial radar screens of many entrepreneurs and business people across the globe. They’re probably much more exercised over the merits or otherwise of business banking services, But maybe they should be looking at CDM, not least because entrepreneurial activity and green make interesting bedfellows these days. 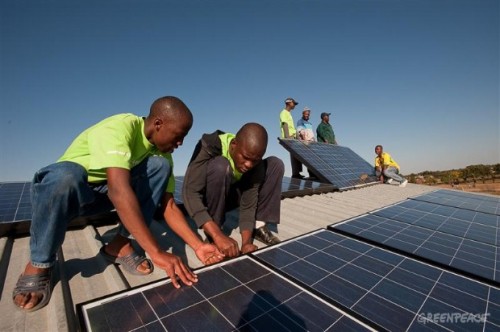 The rationale behind CDM is a fascinating one. It’s predicated on the belief that it’s far harder and costlier for industrialized countries to reduce greenhouse gas emissions than developing countries. That’s because developing countries usually start from a less-cluttered and less-regulated historical background. However, projects demonstrating reduced greenhouse gas emissions must also meet sustainable development and additionality criteria in order to qualifying for CDM support.

Put simply, this means any project or venture must clearly show that the use of resources not only meets human needs but also doesn’t harm the environment at the same time. And any greenhouse gas reductions made as a consequence would have happened anyway, with or without CDM funding. The international treaty, the United Nations Framework Convention on Climate Change (UNFCCC), was the forerunner to the legally binding Kyoto Protocol, adopted by almost all countries of the world.

Under Kyoto, the most highly industrialized countries are required to achieve quantifiable reductions in greenhouse gas emissions. Less-developed countries, which are much more likely to suffer disproportionately from the effects of any climate change, don’t have such targets. According to the UNFCCC secretariat, the CDM and other market-based mechanisms, adopted as part of the Kyoto Protocol negotiations, allows emission-reduction projects in developing countries to earn certified emission reduction (CER) credits, each equivalent to one tonne of CO2. These CERs can be traded and sold, and used by industrialized countries to meet a part of their emission reduction targets under the Kyoto Protocol.

The mechanism, says the UNFCCC secretariat, stimulates sustainable development and emission reductions, while giving industrialized countries some flexibility in how they meet their emission reduction limitation targets. The UNFCCC announced at the beginning of February 2013 the number of CDM projects registered had reached the 6,000 mark. Last week, the UNFCCC secretariat and the East African Development Bank (EADB) signed a partnership agreement to establish a regional collaboration centre in Kampala, Uganda, in an effort to increase participation in CDM projects.

It is the second such centre in Africa, the first one being opened several months ago in Lomé, Togo, by the UNFCCC in collaboration with the BanqueOuestAfricaine de Développement. UNFCCC Executive Secretary, Christiana Figueres, said, “The two regional collaboration centres in Lomé and Kampala are designed to help Africa increase its attractiveness and potential for CDM. Our goal is to build capacity, reduce the risk for investors in such projects and help make the continent an increasingly attractive destination for CDM projects.”

The office in Kampala will be operational from May 2013. Besides hosting the office, the EADB is also expected to provide personnel, as well as administrative and logistical support. EADB Director General Vivienne Yeda lauded the partnership between the two organizations and said, “This partnership with UNFCCC is key for us at EADB as we invest in sustainable development and seek to ensure sustainability in all our operations. We hope that the new office will help increase the regional distribution of CDM projects in East Africa where there is an acute need for sustainable development.”

Salman Zafar is the Founder of EcoMENA, and an international consultant, advisor, ecopreneur and journalist with expertise in waste management, waste-to-energy, renewable energy, environment protection and sustainable development. His geographical areas of focus include Middle East, Africa, Asia and Europe. Salman has successfully accomplished a wide range of projects in the areas of biomass energy, biogas, waste-to-energy, recycling and waste management. He has participated in numerous conferences and workshops as chairman, session chair, keynote speaker and panelist. Salman is the Editor-in-Chief of EcoMENA, and is a professional environmental writer with more than 300 popular articles to his credit. He is proactively engaged in creating mass awareness on renewable energy, waste management and environmental sustainability in different parts of the world. Salman Zafar can be reached at salman@ecomena.org or salman@bioenergyconsult.com
View all posts by Salman Zafar →
Tagged Africa, CDM, CDM Projects in Africa, clean energy, emissions, Kyoto Protocol, Sustainable Development, Togo, UNFCCC. Bookmark the permalink.