The streets of Abdullah Bin Jassim near the iconic Souq Waqif in Doha were painted blue recently as part of a pilot project to reduce the effects of extreme heat in the city. By reflecting the heat instead of absorbing it, the blue-coated asphalt roads will support Qatar’s battle to combat the Urban Heat Island effect (UHI). 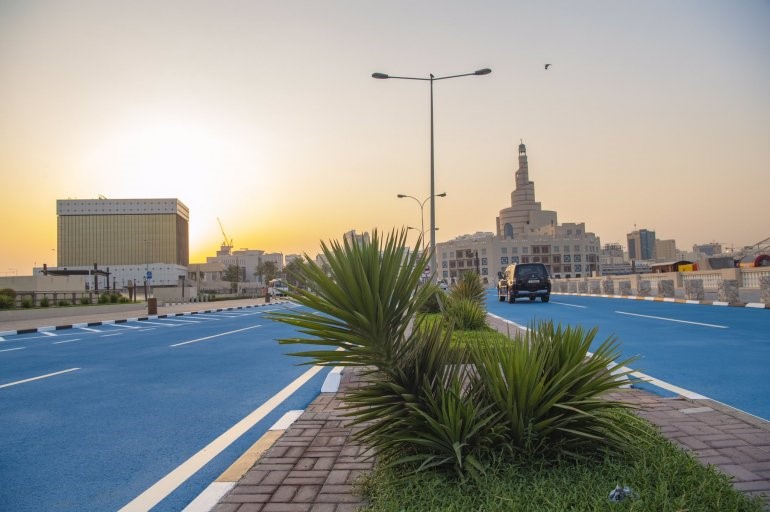 With 55 per cent of the world’s population currently living in urban areas, cities struggle to meet their overflowing capacity resulting in a dense network of high-rise buildings, roads and highways. Regardless of the city’s climatic characteristics, this leads to a greater density of impervious and heat reflective structures due to the nature of building materials.

Termed as the Urban Heat Island (UHI) effect, the city experiences a greater absorption of heat and subsequent temperature increase due to the lack of ventilation and air flow. As one of the most widely documented impacts of climate change in cities, UHI is known to cause increase in surface and air temperatures, as much as a 12°C difference between urban and rural areas.

What are the impacts of UHI?

Such temperature increases in cities can have drastic consequences such as heat-related deaths especially among vulnerable populations like the elderly. Moreover, increased temperatures can also exacerbate greenhouse gas emissions as a result of increased air conditioning and other sources of energy consumption used to battle the heat.

The rise in air temperatures and lack of air flow also provides the perfect environment for increase in pollutants such as NOx compounds and tropospheric ozone, both of which result in air pollution and smog over cities, leading to even more health impacts and fatalities.

How can we mitigate and adapt against UHI?

One of the ways to mitigate against UHI involves increasing areas for vegetation and tree canopy cover as they reduce temperatures by providing shading and cooling the environment through evapotranspiration. Promoting green infrastructure across buildings is another way to mitigate against UHI as structures, such as green roofs, help to cool buildings and the surrounding areas, thus reducing the need for excessive use of air conditioning systems. Moreover, green roofs also work to reduce the UHI effect by absorbing air pollutants and toxins. Utilising other natural methods such as increasing the number of inland water bodies is also a well-known mitigation strategy against UHI.

Nevertheless, cities have begun focusing on adapting to the impacts of UHI, with the most recent development of heat reflecting paint that has coloured the streets of Doha blue. As part of the pilot project, the blue painted streets will test how well the paint can reflect the heat and thereby reduce city temperatures, as opposed to traditional roads absorbing most of the heat. Similar initiatives have already been tested in other parts of the world, with the most iconic being the white streets of Los Angeles.

Mishma Abraham holds an MSc in Environmental Technology from Imperial College London, where she specialised in understanding the public acceptance of carbon capture and storage technologies. She also has a BSc in Environmental Science from Queen Mary, University of London, where she focused on assessing carbon storage in London's urban forests. During her academic degrees, she was involved in the universities' sustainability initiatives and community outreach programs, which motivated her to pursue a career within the sustainability and CSR sector. Post her Master's course, she interned with Corporate Citizenship, a global sustainability consultancy headquartered in London, and worked on various client projects on ESG issues monitoring, benchmarking and strategy development.
View all posts by Mishma Abraham →
Tagged Blue Roads, Blue Roads in Qatar, Green Infrastructure, Green Roofs, Heat, Impacts of UHI Effect, Qatar, Temperature, UHI Effect, Urban Heat Island. Bookmark the permalink.

2 Responses to Blue Roads in Doha: An Innovative Way to Combat Rising Temperatures