Are Green Roofs a Viable Option for the Middle East?

Urban green roofs have long been promoted as an easy and effective strategy for beautifying the built environment and increasing investment opportunity. The building roof is very important because it has a direct impact on thermal comfort and energy conservation in and around buildings. Urban green roofs can help to address the lack of green space in many urban areas. 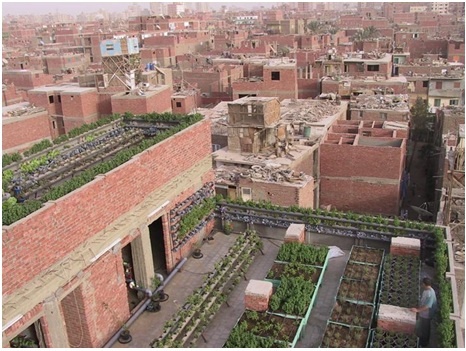 What are Green Roofs

Green roofs are essentially sustainable and passive design features of vegetation surfaces applied to a waterproofing layer of a suitable conventional roof build-up in rainy climates. In rainy countries such as Austria, Germany and Belgium green roofs are recognized as a significant source-control feature, contributing mainly to stormwater management and drainage control.

Green roofs not only store water at roof level, but also reduce the run-off rate from the roof, which in turn reduces the underground drainage network requirements. It is also possible to use or harvest rainfall from a green roof, although the amount of rainwater that can be used may be reduced depending on the type of green roof implemented.

Generally speaking, there are no green roofs in hot arid climates. In in the Middle East, it is hardly to find any examples of successful green roofs. According to European norms the minimum annual precipitation rate for a green roof should be more than 450-650mm. Therefore, it is impossible to grow a green roof in Cairo (26mm), Amman (276mm), Riyadh (20mm) or Dubai (10mm). Even coastal cities like Alexandria (190mm), Tunis (450mm) or Casablanca (425mm) witness extreme summers and drought periods that almost eliminates the sedum plants from recovery during the winter season.

Facing these facts, there are many voices in the Middle East that surprisingly continue pushing the idea of green roofs claiming to sustain it through artificial irrigation. An idea that make us lose the whole point of sustainability in an already water scarce region.

Unfortunately, across the Middle East there are large numbers of students, architects, clients and even researchers who have a wrong perception and a defective understanding of semantic of green roofs,which are essentially associated with the presence of renewable rain water. This is due to the unfamiliarity with word Green Roof in our region and the huge influence of the Northern imaged media.

Moreover, there are many researchers who talk about the positive side effect of green roofs that significantly save energy, enhance the thermal performance and comfort of buildings, particularly in terms of summer cooling, based on readings and studies made in countries with latitude higher than 40o with temperate or cold climates. What is missing here is local evidence based experimentation and practices that address green roof in the warm and hot climate not from a theoretical copy-paste approach.

Arab cities suffer from serious problems that are similar to most other large cities in the developing countries. Among the most visible manifestations of the challenges posed by rapid urbanization are many environmental problems, such as pollution, dense urbanization, urban heat island effect and inversed greenhouse effect during winters. In fact, the dense concentration of automobiles and polluting buildings created a negative impact on the environment. In fact, the rapid urbanization not only created environmental problems but also economic problems.

For example, air conditioners are running, over the whole summer period, trying to deliver an endless demand for cooling. This leads to increasing prices of electricity bills. This is due to the lack of energy codes, which means that roofs are without or with very poor insulation. Additionally, cities suffer from constant desert sand depositing together with disappearance of green spaces which lead to deprivation of open space.

During the last decade many Arab cities witnessed several times inefficient food production and distribution, inaccessibly high food prices and above all locally grown food, loaded with toxic contaminants. The fast-growing population and the failing government approaches to housing and spatial planning policies contributed to the growth off informal settlements within and around the center.

For example, 8 million Egyptian live in informal settlements in Cairo with problems of unemployment, pollution, transportation, inadequate drainage and sewerage, and lack of usable urban open spaces. In Cairo, the amount of green space per inhabitant is roughly equivalent to 0.33 square meters per person (3.5 square feet), one of the lowest proportions in the world. Among the above listed problems stands out a common denominator. It is the building roof.

Roof Farming as an Alternative

Under the influence of the all those issues emerges the idea of roof farming. Urban roof farming has long been promoted as an easy and effective strategy for beautifying the built environment and increasing investment opportunity. Roof farming can help to address the lack of green space in many urban areas. Urban roof farms provides the city with open spaces that helps reduce urban heat island effect and provides the human population on the site with a connection to the outdoors. Challenged by environmental and pollution, Cities suffer from locally grown food, loaded with toxic contaminants that threat the health.

In the last couple of years, Cairo suffered from an inefficient production and food distribution and inaccessibly high food prices. The population explosion and the tendency to build on agricultural land have acted to limit the resources of city families and their access to healthy edible products. With a little effort and money, roof farming can contribute in improving the families quality of life and provide them with healthy food and raise their income, this is besides the environmental and aesthetical role it plays.

For example, Cairo citizens and some governmental authorities acknowledged the problem of food contamination & distribution and are mapping measures and methods that can guarantee safe food.While it is not new, the notion of planting rooftops in Egypt has only recently been implemented. In the early 1990s at Ain Shams University, a group of agriculture professors developed an initiative of growing organic vegetables to suit densely populated cities of Egypt. The initiative was applied on a small scale; until it was officially adopted in 2001, by the Food and Agriculture Organization (FAO). 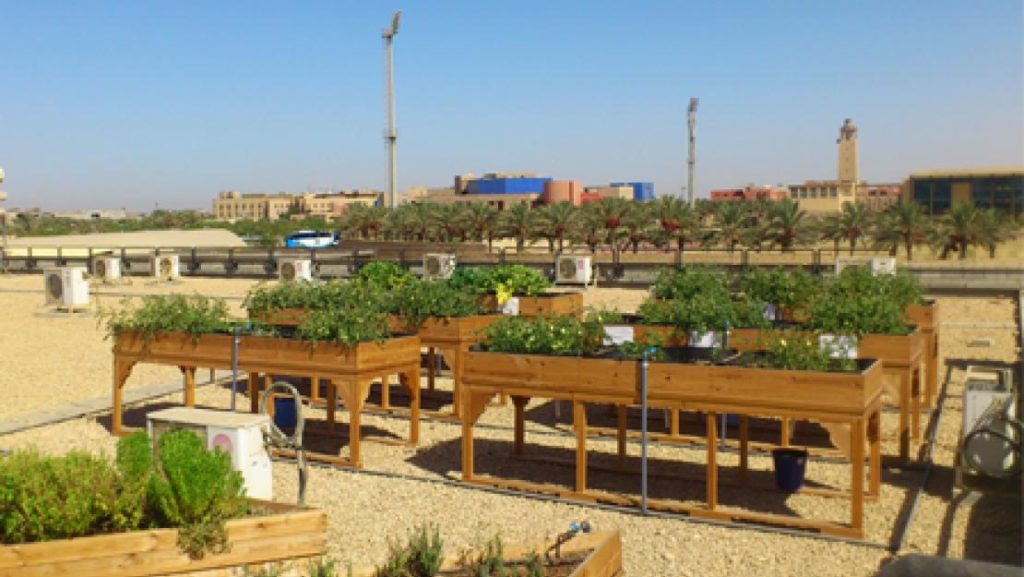 There are several case studies that represent successful projects implemented by different non-governmental organizations (NGO), public institutions and private civil initiatives. For example Ibn Kassir foundation, in Al-Zawya Al-Hamra, Cairo, created a roof farm from wooden containers (barrels) with plastic sheets filled with peat moss or perlite used as substrates. The drainage is driven through small plastic hoses to buckets. This system is producing leafy crops such as parsley, radish, and carrots. A square meter using this method would cost around 400 Egyptian pounds (LE).

Finally, in many Arab cities, where many environmental social and economic problems exist, a beam of light emerges to contribute in solving many of these interrelated problems. Planting our roof with different kinds of vegetables and fruits or even any kind of green plants will change lots of things. It is certain that roof gardening and farming have measurable qualitative and quantitative benefits. The techniques for implementation are simple and doable and above all cost efficient. However, no roof gardens can be created without the knowledge of the factors affecting the creation and design. The most important factors are the climate, the constructional and economic factors.

Regarding green roofs, we shall only address this issue based on experimental and monitored cases. More importantly, a vision is required to be drawn together with long term strategy, adopting the holistic approach of roof farming and providing support and sustainability. It is this holistic approach that can solve many problems of different background and aspects, and can contribute to improving the quality of life of the dense Arab cities.

By exploitation of such roofs, their development and planting; a reasonable ratio of green areas can be reached in the near future. A ratio of 4 square meters per person can be provided once the suitable green framing roofs have been developed and exploited.

8 Responses to Are Green Roofs a Viable Option for the Middle East?