On Recycling of Fluorescent Bulbs 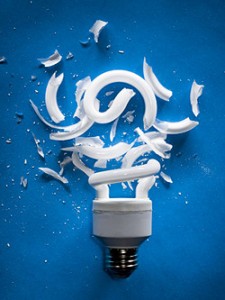 All fluorescent bulbs contain mercury. In fact, the standard fluorescent bulb has about 20 milligrams of mercury. It is clear that these lamps must be managed properly to protect human health and the environment. The risk of leaving mercury deposits in landfill is high; therefore, recycling seems the most conscientious and environmentally safe recourse. A comprehensive fluorescent bulb recycling strategy will not only help in environment protection but can also promote new business growth and job opportunities.

Usage of fluorescent bulbs, however, is not entirely without risk because they contain mercury, a chemical compound that can have debilitating effects on humans upon prolonged exposure. Because of its unique properties, the most effective way to dispose of mercury-bearing wastes is through recycling.

Continued illegal disposal of mercury wastes continues, resulting in unnecessary exposure to people and the planet; however, a grassroot movement to protect the environment has created momentum to generate a national law prohibiting the disposal of fluorescent bulbs in landfills.

The UNEP/GEF en.lighten initiative was launched in September 2009 as a globally coordinated effort to accelerate the transition to efficient lighting and mitigate climate change, The objective of the initiative is to calculate the potential electricity savings, CO2 emission reductions and the economic benefits that could be realized from phasing out inefficient lighting and replacing them with compact fluorescent lamps (CFLs). Around 100 countries were analyzed globally, with 19 hailing from the MENA region.

Countries like Egypt, Tunisia, Morocco, and Lebanon have announced ban on the sale of all incandescent bulbs by specific target years. Likewise Qatar has already announced plans to phase out use of incandescent bulbs. However, the promotion of CFLs demands a viable strategy to counter broken and disused fluorescent bulbs in order to prevent its harmful effect on the environment and public health.

With the labeling of the symbol “Hg” on each lamp, individuals should recognize these products contain mercury. In United States, fluorescent bulbs and other types of energy-efficient lighting as well as nickel-cadmium batteries, pesticides and thermostats are regulated under the Universal Waste Rule (UWR).

The UWR allows businesses, government agencies and other generators an opportunity to recycle bulbs and other types of universal waste at the end of life rather than manifesting and disposing of them as a hazardous waste. This can result in significant savings for the business or property owner. Recycling also helps protect our environment from potentially toxic materials.

Many governments and retailers are offering CFL recycling schemes that safely handle the mercury. Private industry has to partner with government to develop a plan to eliminate fluorescent bulbs in landfills.

To further encourage recycling, the cost of recycling should be initially absorbed by the manufacturers, who in turn, may pass the costs to the consumers. The consumer can then return the spent bulbs to their purchase point of origin. This has worked in other recycling sectors, and it can also work with mercury-containing devices such as fluorescent lamps.

Mark A. Ceaser is the Director of OMNI/Ajax ,a Pennsylvania manufacturing firm focused on production of spill control materials for hazardous waste cleanup. He holds BA in Management and MBA in Finance & Investment and has written white papers regarding medical waste disposal, bloodborne pathogen handling and the recycling of mercury bearing wastes that have been published in various publications. He co-holds US patents for aerated foamed recycled cellulose fibers particularly as a replacement for clay cat litter and alternative daily landfill cover. Mark has over 20 years of experience in manufacturing spill control materials along with consulting clients on their waste management issues.
View all posts by Mark Ceaser →

12 Responses to On Recycling of Fluorescent Bulbs