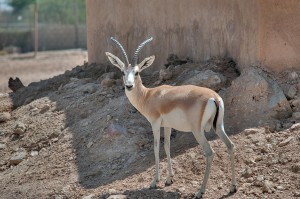 Qatar’s environmental impact remains worryingly high. The country’s per capita ecological footprint is now the second highest in the world, as another Gulf state, Kuwait, has overtaken it to become the worst offender of the 152 countries that were measured, according to the World Wildlife Fund (WWF) Living Planet Report 2014. The third country in the list is the UAE, with Saudi Arabia, the world’s largest oil producer, in 33rd position.

By comparing the total footprint with the planet’s biocapacity – its capacity to generate an ongoing supply of renewable resources and to absorb waste -the report, based on 2010 data, concludes that the average human’s per capita footprint exceeds the planet’s capacity by 1.5. Most MENA countries’ ecological footprints also exceed their biocapacity in terms of their global rankings.

Qatar’s footprint, measured in global hectares (gha), is 8.5 – the second highest in the world, but down from 11.6 in the 2012 report. Only Kuwait fared worse, with a footprint of over 10gha. According to the WWF report, if all people on the planet had the footprint of the average resident of Qatar, we would need 4.8 planets. If we lived the lifestyle of a typical resident of the USA, we would need 3.9 planets. The figure for a typical resident of South Africa or Argentina would be 1.4 or 1.5 planets respectively. The world’s average footprint per person was 2.6gha, but the global average biocapacity per person was 1.7gha in 2010. This is based on the Earth’s total biocapacity of approximately 12 billion gha, which has to support all humans and the 10 million or more wild species.

Salman Zafar, founder of EcoMENA, a voluntary organisation that promotes sustainable development in the Arab world, attributes the Qatari situation on lack of environmental awareness among the local population, lavish lifestyles and a strong dependence on fossil fuels. “The huge influx of workers from across the world has put tremendous strain on already stressed natural resources. Migrant workers, who make up a huge chunk of the population, remain in the country for a limited period of time and are not motivated enough to conserve natural resources and protect the environment,” he adds.

As for Kuwait, he says the growing ecological footprint may be attributed to its flourishing oil and gas industry, an increase in desalination plants, the presence of hundreds of landfills, excessive use of water, energy and goods, a huge expatriate population and the absence of concrete environmental conservation initiatives.

Of the 25 countries with the largest per capita ecological footprint, most were high-income nations. For virtually all of these, carbon was the biggest component, in Qatar’s case 70%. Carbon, specifically the burning of fossil fuels, has been the dominant component of humanity’s footprint for more than half a century, says the WWF report – in 1961, carbon had been 36% of the total footprint, but by 2010 it had increased to 53%.

In 2013, the concentration of carbon dioxide in the atmosphere above Mauna Loa, Hawaii – the site of the oldest continuous carbon dioxide measurement station in the world – reached 400 parts per million (ppm) for the first time since measurements began in 1958. This is higher than they have been for more than a million years, and climate science shows major risks of unacceptable change at such concentrations. Furthermore, 2014 has globally been the hottest year since measurements started, and the World Meteorological Organisation predicts that this upward trend will continue.

The world’s total population today is already in excess of 7.2 billion, and growing at a faster rate than previously estimated. The dual effect of a growing human population and high per capita footprint will multiply the pressure humans place on ecological resources, the report states. As agriculture accounts for 92% of the global water footprint, humanity’s growing water needs, combined with climate change, are aggravating water scarcity.

The authors also make it clear that in the long term water cannot be sustainably taken from lakes and groundwater reservoirs faster than they are recharged. Desalination of seawater also leads to brine (with a very high concentration of salt and leftover chemicals and metals), which is discharged into the sea where it poses a danger to marine life.  In terms of biodiversity, the report shows an overall decline of 52 percent between 1970 and 2010. Falling by 76 percent, population of freshwater species declined more rapidly than marine and terrestrial (both 39 percent) population.

With regards to Qatar’s biocapacity, its fishing grounds make up 92% of the total, while the country ranks 66th globally in terms of its biocapacity per capita. Like other Gulf states, it can operate with an ecological deficit by importing products, and thus using the biocapacity of other nations; and/or by using the global commons, for instance, by releasing carbon dioxide emissions from fossil fuel burning into the atmosphere, says the report.

Although Qatar has initiated plans to reduce its footprint and live less unsustainably, the latest electricity demand figures from Qatar General Electricity and Water Company (Kahramaa) show a 12% rise in demand for power over the previous year. This is in line with the country’s population growth, meaning that there has been no reduction in the per capita consumption, which is still under the top 15 countries in the world. Its water consumption per capita is also one of the highest in the world.

Qatar’s heavy reliance on gas and oil, its subsidised water and electricity, and the huge amount of energy needed for water desalination and air-conditioning make it unlikely that the country’s per capita standing in terms of the ecological footprint will improve anytime soon, but given the country’s small size its total impact is still relatively small.

Salman Shaban from the metal recycling company Lucky Star Alloys, regards the report as only highlighting Qatar’s current rapid development. “It is not fair to come to any conclusions at this stage when the construction, transport system and population boom is taking place. Any place that will go through such a fast development will initially have its impact on the ecological systems.” He foresees a gradual carbon footprint reduction once the construction and development phase is completed.“ Having said that, it is still every resident and citizen moral responsibility to conserve energy and protect the environment,” he adds. “Recycling should be a standard part of every household culture.”

Although it makes for some disturbing reading, the report makes it clear that many individuals, communities, businesses, cities and governments are making better choices to protect natural capital and reduce their footprint, with environmental, social and economic benefits. But given that these exhaustive reports are based on data that is four years old, any current changes for better and worse will only become clear in the near future.

Sybrandus Adema is a freelance journalist based in South Africa, where he now lives in a small village, trying to live more sustainably. He has worked in various other countries, including the Netherlands, UK and Qatar, producing articles for a variety of newspapers, magazines and online publications. In South Africa he was also the production editor of the largest daily newspaper, Daily Sun.
View all posts by Sybrandus Adema →