Jordan has had to accept being labeled a Refugee Country since its independence, as the country has absorbed several waves of refugees from neighboring countries in a region of uncertainty.  It began with the Arab-Israeli Wars in 1948 and 1967, followed by the Gulf Wars in 1991 and 2004, and ended with the most recent conflict in Syria, which added 1.4 million refugees to the country’s population. This posed extraordinary challenges to Jordan’s water sector, which lacked the necessary resources to meet the increased demand. Former UN High Commissioner for Refugees and current UN Secretary-General Antonio Guterres summed up Jordan’s experience in 2014, saying that “the simple act of providing water to Syrian refugees living in Jordan is a daily miracle.” In addition, Jordan’s population has increased from 2 million in 1975 to around 10 million in 2020 due to a combination of organic growth and refugee influxes. Jordan’s urbanization has steadily increased, and in 2020, 91 percent of Jordan’s total population lived in urban areas and cities, up from 86 percent in 2010. The country’s population growth, improved living standards, and other social and economic developments have all contributed to an increase in municipal water demand.

Even though Jordan contributed very little to climate change, it is expected to suffer far more than other countries, with less precipitation, dwindling groundwater resources, and rising temperatures in the forecast.

Furthermore, Jordan’s unique topography necessitates water pumping over extremely high elevational differences of more than 1,300m and long distances of more than 300km between available surface and groundwater resources and population centers. This has resulted in high operating costs, with electricity being the most significant contributor. One of the major challenges confronting the water sector is maintaining current water production while also securing the necessary investments to meet the country’s future water demand.

In terms of water management, the arrival of Syrian refugees in 2011 created a “crisis on top of a crisis.” The northern region was hardest hit by refugees, with the population increasing by more than 20% in just two years. The internal displacement of refugees resulted in a settlement pattern that differed markedly from previous crises. Around 85 percent of the refugees lived in host communities, adding to the strain on already overburdened systems. Prior to the crisis, the population was served by an intermittent water supply regime, which meant that there was no buffer to accept additional needs and demands. 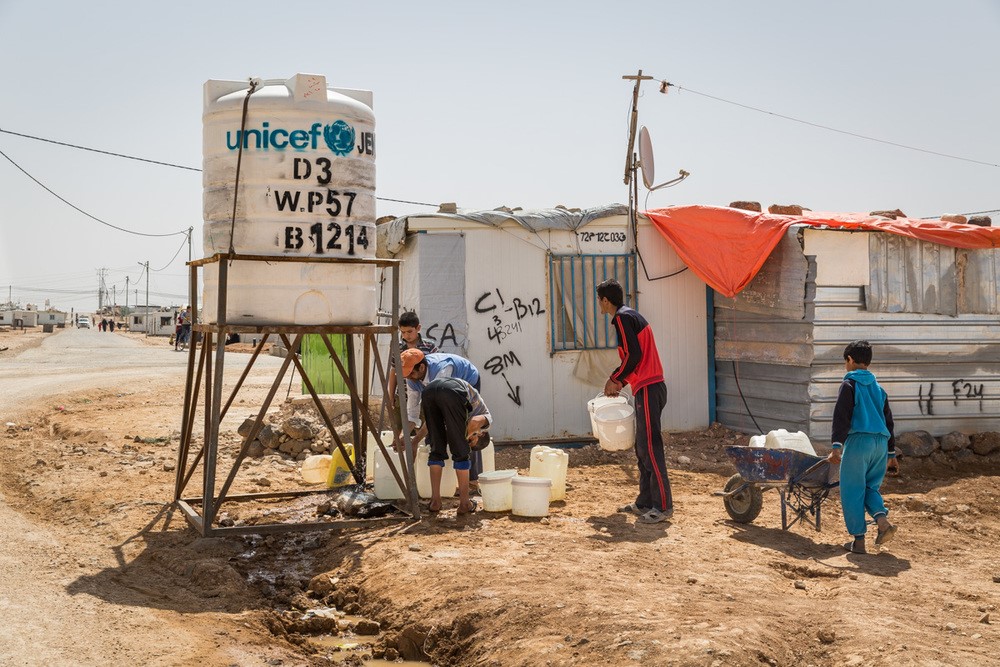 The experience in dealing with the Syrian crisis has gifted the water sector with valuable lessons to become resilient in dealing with similar humanitarian and emergency scenarios.

Water and wastewater treatment projects typically have planning horizons of 25 to 30 years. The arrival of a large number of refugees necessitates earlier investments and raises future costs for water resource development. Donor assistance focuses on investments; however, operational costs are not covered. This jeopardizes the long-term viability of existing and new investments because Jordan’s government is unable to fund the additional resources required through its own revenues.

To maximize fundraising, it is critical to move away from short-term planning horizons and capitalize on short-term media attention. The fact that settling refugees in countries with similar socio-cultural backgrounds has reduced tensions and required much less funding (Germany, for example, has budgeted 12 billion EUR for settling 1 million refugees on its land) should aid in the more effective use of limited refugee support funds. Operating costs incurred as a result of providing services to refugees must be factored into the funding.

For targeted and effective action, early coordination among all stakeholders is required. This contributes to lowering the enormous administration and management costs by establishing focal points within national authorities to coordinate and integrate ongoing investment programs and short-term humanitarian assistance. Integration of refugees within host communities is preferable as a means of accommodating large numbers of refugees while limiting the establishment of temporary camps, but it can only be accepted if the international community guarantees the resources to reinforce and manage the related infrastructure. Establishing a nationwide related refugee development fund, rather than separate individual or bilateral funding arrangements, and having a multi-sector task force manage and use such funds is thus critical.

The international community’s reduced support forces refugees to internalize within Jordan and migrate to other countries within and outside the Middle East region. Jordan is by far a stable country that has hosted a large number of refugees from various neighboring countries. Experience has shown that refugees stay for an average of ten years or longer, but international support typically declines over time due to ‘donor fatigue,’ which cannot be accepted. If the necessary international assistance is not secured, Jordan’s water sector will be driven from crisis management to a partial meltdown of service delivery, with serious consequences for stability.

Iyad Dahiyat is the former Secretary-General of the Water Authority of Jordan (WAJ) and the Ministry of Water and Irrigation in Jordan during the period between 2016 - 2019 with more than 20 years of experience in water resources development and management, climate change adaptation and mitigation, and infrastructure governance and financing. He managed more than 50 projects to improve basic services and enhance utility operational efficiencies in the water sector for a total value exceeding 1 billion USD. He also managed the two flag-ship PPP projects in the water sector (Disi Water System Conveyance BOT and As-Samra BOT WWTP).
View all posts by Iyad Dahiyat →
Tagged impact of Syrian crisis on water sector in Jordan, Jordan, lessons learnt from Syrian crisis, Syrian refugees, Water Management, water sector, Water Security. Bookmark the permalink.