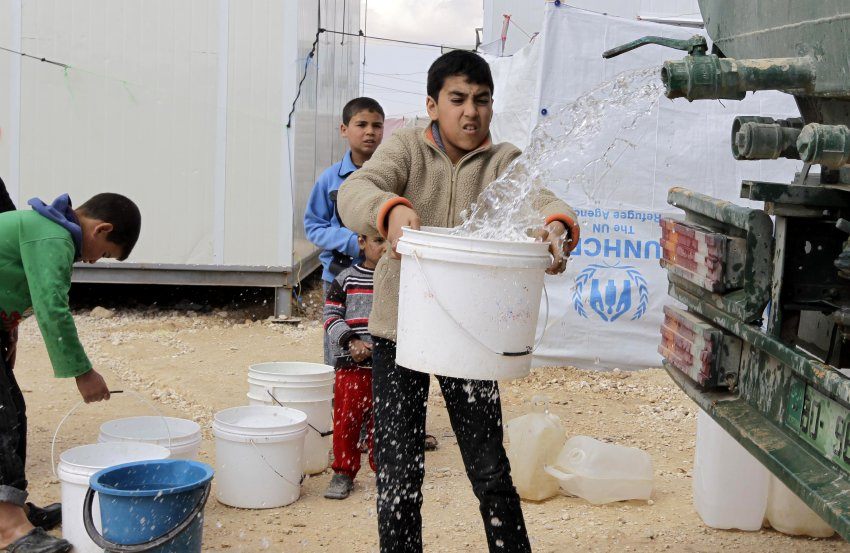 A human being can survive a week without food but cannot live more than three days without water. While the abundance of water in our daily lives means most of us take it for granted, the reality on the ground is that millions around the world suffer from lack of access to water – many of which are refugees. Refugee camps often do not have enough water to supply all refugees residing within them.

Majority of refugee camps in the world are unable to provide the recommended daily water minimum of 20 liters water per person per day. In addition, many countries holding refugees are water-scarce. Jordan, for example, is one of the top 10 water-scarce countries in the world and holds more than 1.4 million refugees (mainly from Syria). This has caused tremendous strain on the country’s very low water resources, making it extremely difficult to supply sufficient water for refugees. However the biggest reason behind lack of water at refugee camps across the globe is the lack of water infrastructure.

The lack of water infrastructure makes it very difficult to transport sufficient amounts of water, and provide proper sanitation to all residents of a refugee camp. In fact, a recent study by the Jordanian Ministry of Water and Irrigation showed that the country’s sewerage network are being overflowed and are subsequently leaking due to the increase in the number of refugees.

Furthermore, studies have shown that water borne diseases are more persistently present when the minimum water requirement (20 liters per person) is not met simply because there is less water for sanitation and cleaning purposes. That is why it is absolutely vital that governments ensure that recommended daily water minimum is provided to all refugees.

Groundwater, on the other hand, is generally subjected to chlorination. These techniques seem to be sufficient to provide an acceptable quality of drinking water. However, according to Syed Imran Ali, an environmental engineer affiliated with UC Berkley, who worked extensively in refugee camps across Africa and the Middle East, the amount of chlorine used to purify the water is not sufficient enough to completely eliminate all the bacteria in the water used in refugee camps.

The reason being that the current emergency guidelines on free residual chlorine concentrations (0.2 – 0.5 mg/L in general, 0.8 – 1.0 mg/L during outbreaks) are based on conventions from municipal piped-water systems (i.e. used in cities) rather than refugee camps.

A study conducted by Ali in South Sudan, where there was an outbreak of hepatitis E and other waterborne diseases, showed that the decay of chlorine added to drinking water is much faster in refugee camps than it is under urban conditions, and within 10-12 hours of household storage and use the chlorine all but disappears.

Within a refugee camp, water is distributed from one point within the camp, carried to homes via containers and then stored and used over 24 hours or more. Therefore, due to all these different factors the guidelines used may not be sufficient enough to maintain an acceptable quality of water in all refugee camp settings.

Refugee camps must have specific guidelines created to deal with the water quality provided within the camps to prevent outbreaks and improve livelihood within the refugee camps. In his study in South Sudan, Ali recommended that guidelines for chlorination control to be revised to 1.0 mg/l in the camps there rather than 0.2 – 0.5 mg/l. This would provide protection of at least 0.2 mg/l for up to 10 hours post-distribution, which is consistent with the recommended concentration for point-of-use water chlorination in emergency and nonemergency settings and is within the WHO limits generally considered to be acceptable to users (2.0 mg/L).

With the refugee situation worsening and no permanent solution to this crisis in sight, the minimum that can be done is to provide an adequate amount and quality of water for these refugees. The current water purification techniques are not efficient enough to protect refugees from all harmful bacteria. There are a variety of ways that water can be provided.

Wastewater treatment, rainwater harvesting, humidity harvesting, among others are sustainable sources of water. However, providing water is not sufficient; water quality is just as important as water quantity. There must be water quality regulations specific to refugee camps that take into account the different aspects that might affect the quality of water (transport, storage, temperature).

If things are to improve, it is absolutely vital for concerned governments, aid agencies, NGOs, volunteers etc. to band together and create water quality guidelines specific to refugee camps and that are capable to withstand different aspects within these camps. Without these guidelines, the condition of refugees will continue to worsen, and the refugees will continue to flee to Western countries in search of better living conditions.