The Amazing Benefits of Rainwater Harvesting

Rainwater harvesting, or collection of rainfall, is not a new concept.  It is simply the collection of water in regions of the globe where there is frequent and regular rainfall. The collected water is stored for use at a later date. Typically, rainwater runs across the rooftops of buildings and is collected in rainwater tanks. This is very common in rural areas for local consumption. Water can also be collected in dams and reservoirs for community usage on a long-term basis.

The collection of rainwater from the roofs of buildings can easily take place within our cities and towns. Initial steps to capture rainwater is to direct the flow of water from the rooftops to gutters, and then to rainwater storage tanks.  This can be designed for individual or domestic use and scaled up for larger applications such as industry or agriculture. 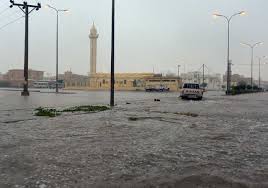 In regions of water scarcity, such as the Middle East, this is a viable option worthy of consideration. Depending on the intended use of the rainwater, water treatment and purification may be required. In this article, we will focus on the feasibility of rainwater harvesting.

The Future of Rainwater Harvesting

The fact that we are using too much water is a reality across the globe.  With the rapid growth in the global population coupled with the impact of climate change, we, individually as well as collectively, need to be more responsible when it comes to how much water we use (or waste).

Rainwater harvesting is now being reinvented, especially in the construction sector. There is a substantial focus towards green buildings and sustainable water usage in urban development plans.  We have grown very accustomed to being able to turn on the water faucet and out flows pure, drinkable water. The reality is that water is a precious commodity that is rapidly diminishing in terms of availability and quality.

The monitoring of water usage and rainfall measurements needs to be more aggressive in terms of long term demands and predictions of future demands. The management of water resources and capacity demands needs to address the volumetric capacity of rain events as these figures will be far more valuable for long term planning and management of our precious and limited water resources.

There is also a great need for innovative and creative ways to harvest rainfall such as permeable road and pavement surfaces that can feed directly into municipal grey water supplies or be diverted to reservoir storage areas. The perception of greywater needs to be improved and more widely disseminated that it is a viable and safe option of water for non-drinking purposes such as irrigation, toilet flushing, etc. With adequate treatment, it could also be used in industrial plant cooling processes.

The capture of rainwater, either directly or indirectly, can significantly reduce our dependence on tapping into groundwater supplies.  In addition, it could be an attractive source of rejuvenating underground aquifers that have already been deleted due to reckless water consumption in urban areas with rapidly growing populations. More importantly, it is a means of managing surface water flooding and being one method of storm water control. 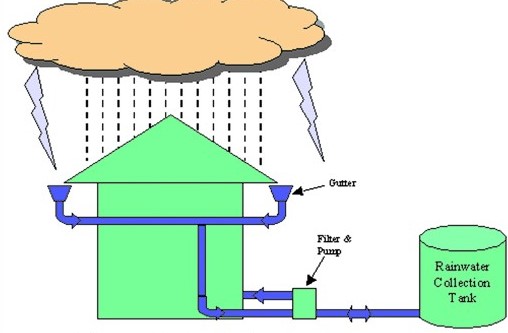 The concept of rainwater harvesting

On the domestic front, collecting and using rainwater could significantly reduce your household water bills as rainwater can be used for watering of green spaces, and exterior surface cleaning. Some of the best identified benefits include the following:

The biggest overall benefit of rainwater harvesting is that it can potentially reduce the extent of flooding (not the threat of flooding), especially during the rainy season, if there is adequate infrastructure in place to capture, divert and store rainfall water. Even if not in a region of the globe with high rainfall, severe rainfall can occur periodically at such a rate that it causes severe flooding.

Therefore, in volumetric terms, this is very significant especially in water scarce regions of the globe. One such place that is now considering the possibilities of rainfall harvesting is in the Kingdom of Bahrain.

This is a very ambitious investigation being undertaken in the Kingdom of Bahrain to assess the feasibility of rainfall harvesting with the possibility of recharging ground water reserve areas. The investigation is an important component of the National Water Strategy (NWS) initiated in 2017. The study will assess the viable options for capturing winter rainfall when it does occur on the island.  This is not a regular or annual occurrence as Bahrain is in an extremely arid, water scarce region of the globe.

A triggering factor for this investigation was the extreme rain event encountered in the winter of 2017 when extreme flooding was experienced all across the Kingdom. The NWS is a component of the regional strategy, a Unified GCC Water Strategy for the time period: 1996-2035.

The overall objective is to manage any available water, even though it is periodic in nature. This is an attempt to conserve and manage water as efficiently as feasibly possible knowing how precious water is and how limited the resource is. The urgency for an efficient rainwater management system is hastened by the expanding population in the region that is almost solely supplied by desalinated water supplies.

The investigation is being conducted by the NWS under the directorship of Dr Waleed Zubari. The rainfall on the island is highly variable and sporadic in spatial and temporal terms. The infrequency of rainfall in conjunction with a very high evaporation rate in the region is very challenging.  However, with more extreme rainfall events occurring as a result of the changing climate does pose a possibility for sustainable methods to be implemented.

If the results of the study are favorable, this would help ease the burden on the Municipalities and also reduce demands on seawater desalination plants. Another viable alternative would be to upgrade and intensify grey water recovery and utilization.

The driving forces for considering rainwater harvesting as an option are because of the rapid increase in human population across the globe, the growing need for desalination plants, food security concerns and the fast depleting freshwater resources.

Dr Claire Cosgrove, Ph.D., is an independent Environmental Scientist and Educator. Looking to establish a consultancy company: “Cultural Awareness, Environmental Mindfulness”. Formerly a Professor of Environmental Sciences in the College of Engineering at AMA International University, Salmabad, Kingdom of Bahrain. Before moving to the Middle East in 2009, Dr Claire was a Research Scientist based in the USA at the University of Virginia, Charlottesville and at Georgia Institiute of Technology in Atlanta, Georgia. Dr Cosgrove has lived and worked in a number of countries such as South Africa, USA, New Zealand and the Middle East. Her research work has covered air pollution, weather modification /cloud seeding, rainfall modelling and simulation and flood forecasting, to name a few areas of interest.
View all posts by Claire Cosgrove →
Tagged Aquifers, Bahrain, climate change, Crops, Desalination, food security, Green Buildings, Greywater, Groundwater, Harvesting of Rainfall, Irrigation, Middle East, Rains, Rainwater, Rainwater Harvesting. Bookmark the permalink.

9 Responses to The Amazing Benefits of Rainwater Harvesting