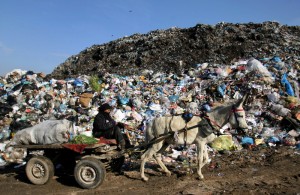 Solid waste management is considered to be one of the most severe environmental and civic problems in the Gaza Strip. Solid waste in the Gaza strip consists mainly of household waste, building debris, agricultural waste, industrial waste (mainly from worksites), medical wastes, and wastes from car workshops. Solid waste in the Gaza Strip is dumped in the same landfill without separation except for medical waste, which is dumped separately in the main Gaza landfill site. The solid waste generation rate varies between 0.35 to 1.0 kg/capita/day.

Trash generation in the Gaza Strip varies between 830 to 894 tons/day in cities and villages and from 276 to 300 tons/day in the refugee camps. Local surveys and estimates indicate that household waste accounts for 45 to 50% of the total solid waste, construction and industrial wastes 22 to 25%, and the remaining types (e.g. commercial and institutional) 25 to 30%. Bad practices in the Gaza Strip with the absence of legislation and inspection mechanisms during the occupation resulted in inefficient and inconsistent waste collection services. On many occasions, waste is being dumped in open areas, in various places in the Gaza Strip. And to add fuel to the fire, present landfills in the Gaza Strip are overloaded. This represents a looming danger to the public health and the environment, and particularly to the ground water resources, which are already poor. Not only that but also, hazardous emissions, which are resulted from waste incineration, contain thousands of carbon tones (CO2 gas), causing the temperature to rise. Thus in turn, would be probably the cause of climate change.

As regard with potential solutions, Governments and many NGO's have tried to solve the problem as much as possible or at least alleviate the effects, which are resulted from it. As an example of these efforts, Natuf Organization for Environment & Community Development in partnership with Arab Youth Climate Movement “AYCM” – Palestine,  implemented “ Environmental Leaders toward a Sustainable Community” project which funded by the European Union and the United Nations Development Programme through GEF. During this project, an environmental initiative titled "Separation and recycling of different waste materials into reusable objects" in cooperation with 'Zero Waste MENA' team in Gaza.

The initiative was carried out in Shalehat Resort located at the Gaza beach with the participation of vacationers. The main activities included a 10-day awareness campaign, which targeted more than 200 families (about 1,400 people overall) and focused on the impacts of solid waste as well as the importance of sorting and reuse. On the final day, children event with clowns and games was held in order to raise their interest in environmental issues and encourage them to become future environmental leaders. 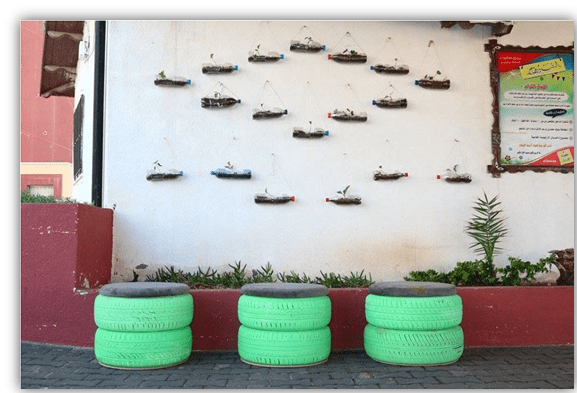 In addition, this initiative aims to create a practical model for waste recycling in the Gaza Strip in order to promote the environmental and the general awareness among residents in Gaza. Such processes, as an illustration, contribute to reducing the consumption of fresh raw materials, energy usage, air pollution (from incineration) and water pollution (from landfilling) by decreasing the need for "conventional" waste disposal and lowering greenhouse gas emissions which are considered as the main cause of climate change. As a result, Recycling can be regarded as a good strategy for waste reduction and mitigation of the climate change impacts in the long term.

To conclude, Gaza Strip has encountered from many serious environmental issues, solid waste management, in particular. Such issues may pose detrimental threats to our environment as well as our health. Consequently, I deeply believe that all of us, governments and individuals, should be responsible and careful about our Earth as much as we can. We should work hard together in order to save the whole environment for all of us and for the future generation.

Baraa Hashem is an Environmental Engineer with core areas of expertise being sustainable waste management and climate change adaptation. She is currently pursuing her MS degree in Environmental Sciences from Macquarie University, Australia. Baraa is an active member at the Arab Youth Climate Movement “AYCM” - Palestine, which works to create a generation-wide movement across the MENA to solve the climate crisis. She is also a volunteer at “Zero Waste MENA”, which is a new initiative driven by environmentalists to promote sustainable practices to create zero waste communities in the MENA. Baraa believes that each of us has a role to play in saving our earth and in turn protecting humanity
View all posts by Baraa Hashem →
Tagged AYCM Palestine, environment, garbage, Gaza, Landfills, Recycling, Solid Waste, Trash, waste, Waste Management. Bookmark the permalink.

3 Responses to Trash Talk from Gaza