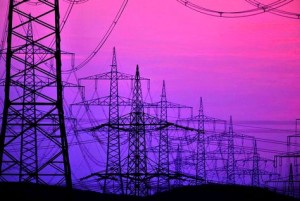 Energy efficiency is the most cost effective means of reducing the energy intensity of the economy and promoting a low-carbon future in the Arab world. Energy efficiency further helps Arab states meet their SDGs on combating climate change and its impacts (SDG13), as it cuts down on GHG emissions resulting from excessive and inefficient consumption of energy.

Energy efficiency improvements can save governments, companies, and citizens billions of dollars in the Arab region from reduced energy bills, while at the same time quickly reducing carbon footprints – a win-win solution. Many countries in the region are now moving ahead with new laws, policies, and regulations to improve energy consumption but much more needs to be done to accelerate results and achieve SDG 7 on sustainable energy.

The Arab Future Energy Index provides a detailed overview on the progress of 20 Arab countries in their transition toward an efficient energy market post recent plunges in oil prices and economic turmoil in the region. The 2017 AFEX report uses over 30 indicators to rank Arab countries on progress made to achieve energy efficiency targets based on regulatory and institutional structures, financial innovations, policy frameworks and public and private investments. AFEX rankings show important trends and emerging pathways to a low-carbon, sustainable energy future in the region. 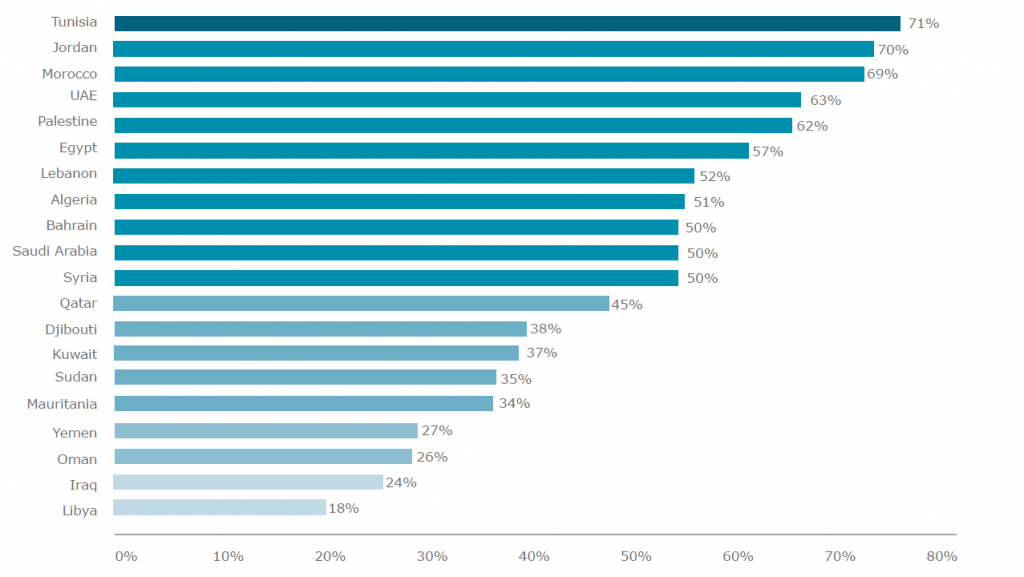 The 2017 AFEX report monitors Arab countries’ progress in fostering energy efficiency initiatives and strategies in line with established UN SDGs. As of 2017, fifteen out of twenty Arab states studied in the AFEX have developed a national energy efficiency plan that articulates both short term and long term strategies to set state level policy goals for reducing energy consumption as well as to establish and implement effective EE initiatives and programs.

RCREEE was mandated by the AMCE to monitor the qualitative progress and quantitative impact of NEEAPs and publish its findings in regular annual reports. Several Arab countries have evaluated their first NEEAP and are currently developing their second NEEAP, building on lessons learned from previous plans. Lebanon, taking a significant step forward, has evaluated its first NEEAP (2011– 2015) and in 2016 adopted its second NEEAP (2016–2020).

In general, electricity and fuel prices in the Arab region remain well below the global average, as most Arab countries have spent significant portions of their GDPs on providing subsidies for electricity and fuel, resulting in a financial burden for these countries, namely after the 2014 drop in oil prices. These low prices of energy have greatly affected the level of energy consumption in the region leading to extremely high energy intensities and electricity consumption per capita. 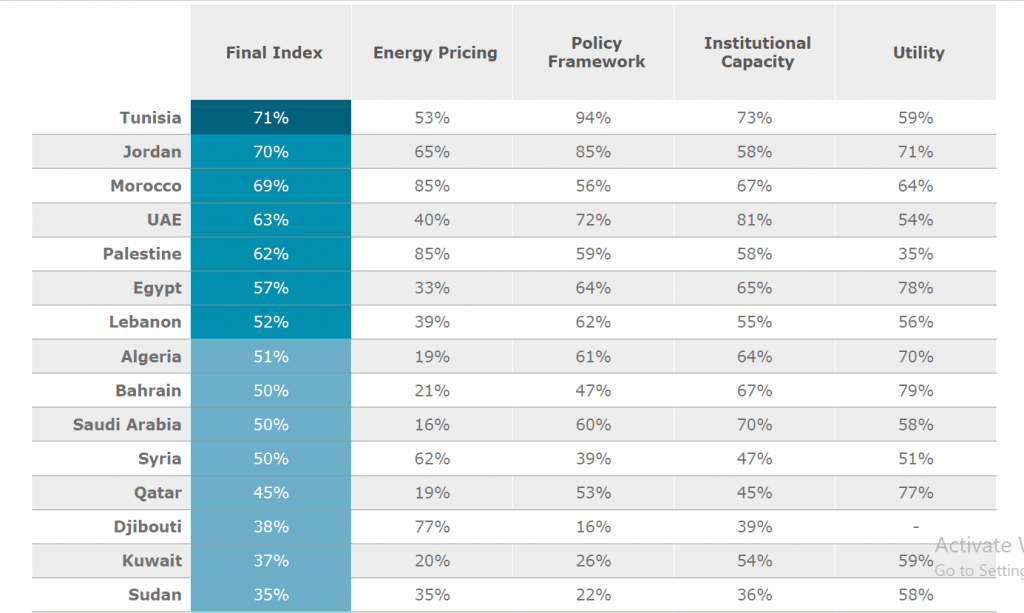 Furthermore, the high level of energy subsidies implemented in the region, greatly hinders any incentive at the consumer side to reduce their energy consumption and invest in energy efficient technologies. Nonetheless, the recent drops in oil prices has, in part, encouraged Arab countries to undertake various reform actions and make progress in reducing their energy subsidies.

The region witnessed an unprecedented wave of energy subsidy reforms as multiple Arab countries namely, Bahrain, Egypt, Jordan, Kuwait, Oman, Sudan, Syria, Tunisia, and the UAE have enacted policies to reduce electricity subsidies and increase fuel prices. Although these reforms were more significant in some countries than others, electricity and fuel prices remain well below the global average in most Arab countries.

The region continues to witness progress in implementing policies to phase out inefficient lighting, which is exigent as lighting is responsible for nearly 34% of electricity consumption in the Arab region. Many countries’ energy efficiency plans have provided financial incentives for end users to switch to more efficient lighting, for example CFL or LED, or enacted bans on the sale of incandescent light bulbs.

Although various Arab countries have adopted legislation and energy efficiency measures relating to appliances’ energy standards and labeling namely for air conditioners and refrigerators, these standards and labels still lack adequate enforcement and diversification to include a wider range of appliances.

Arab country’s still need to further develop and implement energy efficiency regulation, initiatives, and programs to reduce energy consumption in the transportation sector as it is responsible for around 30% of final energy consumption in the region. Although various countries such as Algeria, Egypt, Jordan, Qatar, Saudi Arabia, Tunisia and the UAE have ongoing or planned programs to improve public transportation, the national energy strategies of most Arab countries do not include energy reduction targets or reforms for the transportation sector. For example, tax reductions on hybrid cars, the enforcement of vehicle emissions regulations, and the promotion of public transport are notably absent. 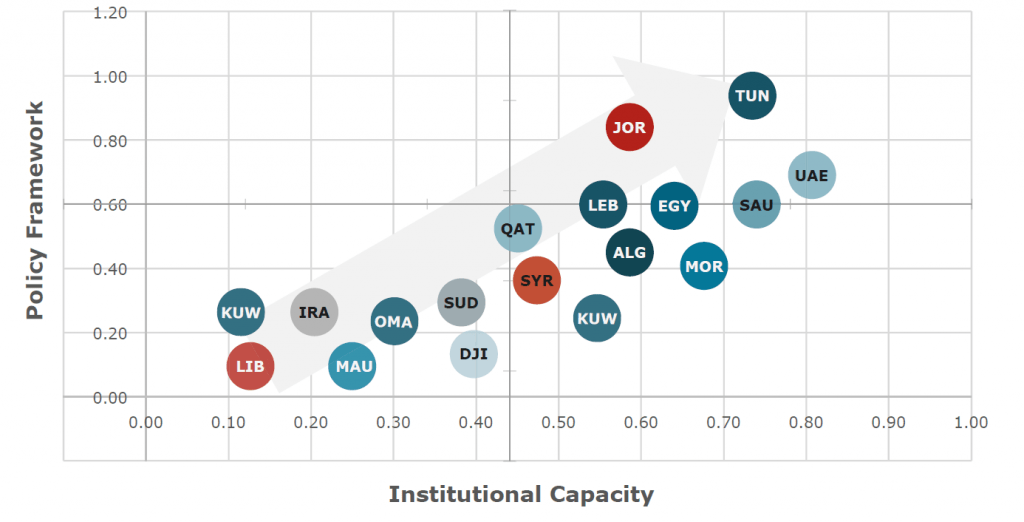 In many Arab countries energy efficiency agencies are dispersed amongst different ministries and institutions, making it challenging to develop and enforce effective policies. Moreover, some Arab countries lack energy efficiency regulatory bodies all together. The increasing availability of funding for energy efficiency initiatives has seen a positive move in recent years to expand the EE market and develop EE projects in various sectors such as the Green Environment Financing Facility (GEFF) in Egypt, the Jordanian Renewable Energy and Energy Efficiency Fund (JREEEF), the Dubai Green Fund, and the National Energy Efficiency and Renewable Energy Action (NEEREA) in Lebanon.

Note: The complete AFEX 2017 report can be downloaded from this link

About Regional Center for Renewable Energy and Energy Efficiency (RCREEE)