How to Convert Scrap Tires into Biofuel

Waste disposal is a serious concern these days, especially with the increasing public awareness of the need to protect the environment. Solid wastes like old tires present complicated disposal problems. Large, hollow, durable, and non-biodegradable, old tires can take up substantial space in landfills. Leaving tires to nature can also be problematic as mosquitoes and other pests may thrive on them.

In the United States, an estimated 300 million scrap tires are produced every year. Around the world, the number jumps to about 2 billion. Fortunately, there are several ways to recycle scrap tires including conversion into biofuels.

What is Tire-Derived Fuel?

Tire or rubber recycling can take on several forms. Tires can be reused in railway lines to reduce vibration. It can also be used as construction materials in playgrounds, running tracks, and other facilities.

One of the best ways to reuse scrap tires is to convert these to biofuel. Generally referred to as tire-derived fuel (TDF), it is a cleaner, more sustainable, and cheaper alternative to fuel. TDF provides an advanced and practical approach to tire recycling, and widely used in industrial facilities worldwide including pulp and paper kilns, cement kilns, and electric utilities.

As a supplemental fuel, it helps companies generate savings in energy costs while increasing boiler efficiency and lowering air emissions. It is estimated that more than half of the scrap tires generated yearly are used as TDF.

With its high heat value, scrap tires are an excellent fuel source. Consider that the heating value of an average passenger tire can go up to 15,000 British thermal units (Btu) per pound, which is even better than the 12,000Btu per pound of coal.

On a grander scale, scrap tires represent a viable energy source. Based on the average discard rate of 300 million tires a year, it is estimated that old tires can produce energy equivalent to around 17 million barrels of oil. This is roughly less than 1% of the energy needs in the United States.

Conversion of old tires into biofuel

There are two physical actions involved in the conversion of tires into biofuel: shredding and pyrolysis, or the decomposition of the tires by exposing it at high temperatures and the use of a special catalyst.

TDF processing may involve whole tires or tires cut down into uniform species. The size of the tire for fuel conversion would largely depend on the kind of combustion unit to be utilized.

In shredding rubber, scrap tires can be entirely placed into the shredder. There is also the option to have the beads extracted before shredding. Shredders are high-shear and low-torque in nature capable of reducing truck tires with an outside diameter of 48 inches to 1 to 4-inch pieces. 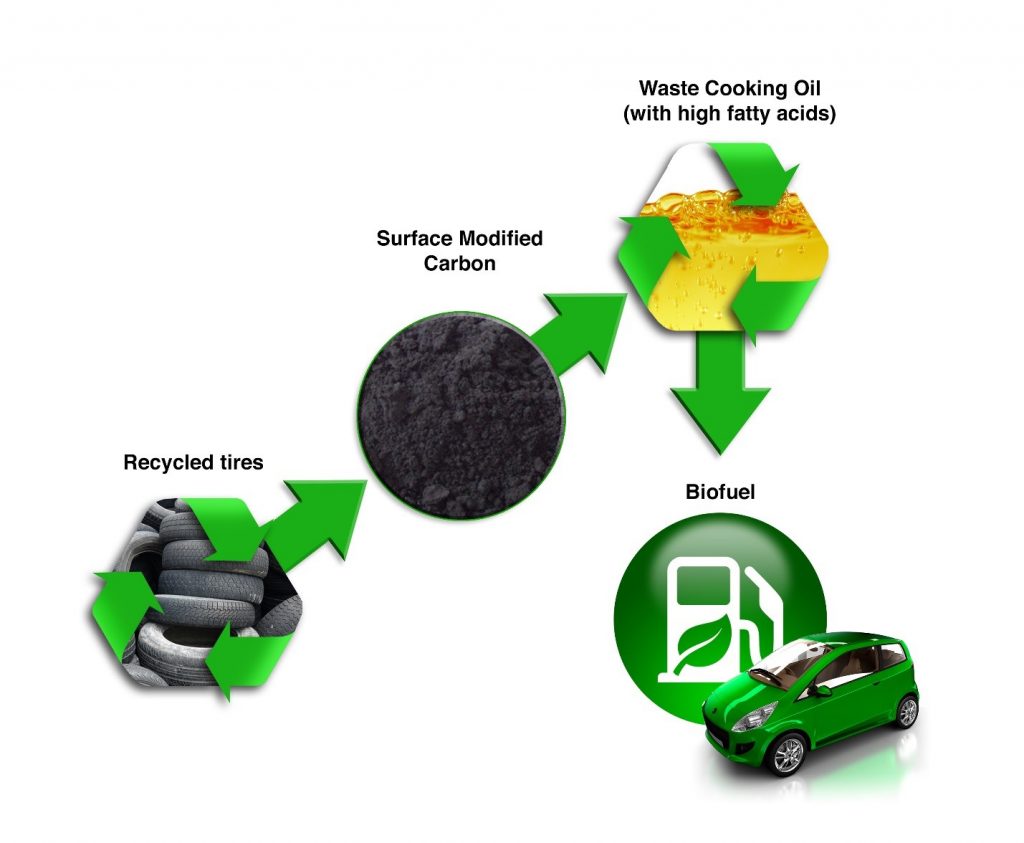 After the tires have been cut into smaller pieces, these are then fed into a pyrolysis reactor. In this machine, the rubber is softened by exposing it to high temperatures that can exceed 700 degrees Celsius. At high-temperature heating, rubber polymers would break down into smaller molecules. These would then vaporize and exit from the pyrolysis reactor.

The vapor can be condensed into bio-oil or pyrolysis oil, an oily type of liquid. It can also be burned directly for power production. Some molecules too tiny to condense remain as gas and burned as fuel.

Critical to this process is the heating rate of a tire as it can affect reaction time, product quality and yield, and energy requirement. In instances when the heating temperature is at around 450 degrees Celsius, the product is liquid which is often a mix of hydrocarbon. At heating temperatures above 700 degrees Celsius, the primary product is synthetic gas or syngas primarily because of cracking of the liquids.

Aside from being used as biofuels, the derived byproducts of bio-oil and syngas can be used as feedstock for refining chemical products. Bio-oil is coveted for its low sulfur and residual carbon content aside from having a high calorific value. It is used in paper mills, cement kilns, power plants, foundries, industrial furnaces, and other industries.

The solid residue from scrap tires called char contains inorganic matter and carbon black. It is commonly used as activated carbon or smokeless fuel in the rubber industry.

In Australia, however, a tire recycling process does not require the shredding of scrap tires in order to convert it into biofuel. The Victoria-based Green Distillation Technologies processes all kinds of tires including the super singles with a diameter of 1.2 meters. The tires are loaded into an airtight process chamber. Shredding, crumbling, or chopping of the tires are not required.

The tires are then subjected to high-temperature heating which serves as a catalyst for a chemical reaction. The tires are destructed into various compounds, one of which is gathered and condensed into the oil. This is the same as the bio-oil produced by a pyrolysis reactor.

As mentioned earlier, biofuel from scrap tires is useful in various industries such as cement manufacturing. TDF is used by cement makers to augment their fuel for firing cement kilns. The use of tires as fuel has also been proven to help in reducing the emission of harmful chemicals into the air.

TDF is also tapped by pulp and paper companies to supplement wood waste, the main fuel used in powering pump mill boilers. TDF has a higher heat value than wood waste while helping overcome operating problems such as low heat content and high moisture content. The use of TDF likewise helps pulp and paper mills lower their fuel costs and improve their combustion efficiency. It can also help improve the public image of paper mill boilers.

To conclude, converting scrap tires into biofuels present a practical energy source for many industries around the world. Thermal conversion of tires into an alternative and clean fuel is considered an environment-friendly and practical approach to disposing of a difficult solid waste.

Salman Zafar is the Founder of EcoMENA, and an international consultant, advisor, ecopreneur and journalist with expertise in waste management, waste-to-energy, renewable energy, environment protection and sustainable development. His geographical areas of focus include Middle East, Africa, Asia and Europe. Salman has successfully accomplished a wide range of projects in the areas of biomass energy, biogas, waste-to-energy, recycling and waste management. He has participated in numerous conferences and workshops as chairman, session chair, keynote speaker and panelist. Salman is the Editor-in-Chief of EcoMENA, and is a professional environmental writer with more than 300 popular articles to his credit. He is proactively engaged in creating mass awareness on renewable energy, waste management and environmental sustainability in different parts of the world. Salman Zafar can be reached at salman@ecomena.org or salman@bioenergyconsult.com
View all posts by Salman Zafar →
Tagged Bio-oil, Biofuel from Scrap Tires, char, Old Tires, pyrolysis, Recycling of Tires, reuse scrap tires, Rubber, scrap tires, scrap tires into biofuel, Shredding, Syngas, TDF, Tire Derived Fuel, uses of tire derived fuel. Bookmark the permalink.

4 Responses to How to Convert Scrap Tires into Biofuel