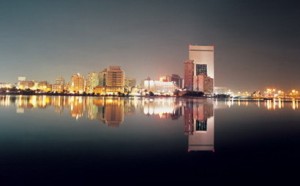 Jeddah, a major commercial hub in the Middle East, is the second largest city in Saudi Arabia. Solid waste management is a big problem in Jeddah as the city’s population is increasing at a rapid pace and has now touched 3.5 million. More than 5,000 tons of solid waste is produced every day and Jeddah municipal authorities are finding it increasingly hard to cope with the problem of urban waste.

The management of solid waste in Jeddah begins with collection of wastes from bins scattered across residential and commercial areas. Wastes is collected and sent to transfer stations from where it ultimately goes to the dumping site. Most of the MSW is disposed in the landfill facility at Buraiman which receives approximately 1.5 million tons of waste per year and has an expected lifespan of between 30 and 40 years.

Buraiman or (Almusk) Lake, has been the dumping site of Jeddah’s sewage wastewater for more than a decade. Wastewater accumulates in underground cesspools and then transported by truck tankers to the sewage lake. The lake lies in east of Jeddah within the catchment of Wadi Bani Malek at about 130m above mean sea level. It contains more than 10 million cubic meters of sewage water spread over an area of 2.88 km2.

The sewage lake has caused some wells in Jeddah to become poisoned due to raw sewage leaking into aquifers. Some studies have reported that water table under Jeddah is rising at 50cm per year which is attributed to the inflow of untreated sewage. As the only dumpsite for municipal sewage and industrial waste, Buraiman Lake is continuously increasing in size, constantly moving towards the south, and is now reported to be only three kilometres away from city houses. 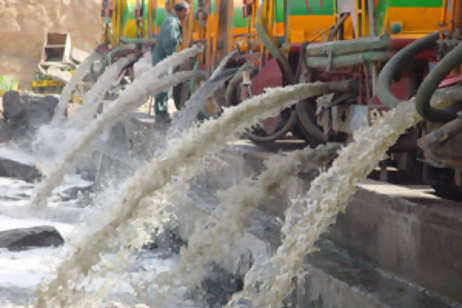 Sewage trucks being emptied at the Buraiman Lake

The lake was created as a stopgap measure to deal with the increasing amounts of wastewater in the growing city. Jeddah’s residents use an estimated 200 litres of water per capita per day. The lake was to be used for depositing this water until a functioning sewage system was created. But plans were delayed because of inadequate funding. As 70 percent of Jeddah households are not connected to sewerage pipelines, wastewater accumulates in underground cesspools and later transported by lorries to Buraiman Lake.

About 50,000 cubic metres of water are transported to the 2.5 million square-metre lake each day. Only a small percentage of the wastewater from the remaining 30 per cent of Jeddah households goes to treatment plants for purification before being dumped in the Red Sea. Most of the waste water that is accumulated through pipes is dumped directly into the sea without purification.

Keeping in view the prevalent waste management scenario, Jeddah municipality is continuously seeking ways to develop city’s sewage treatment infrastructure. However, the current infrastructure is incapable of handling the present generation of raw sewage, leading to the continued storing untreated sewage at Buraiman Lake and dumping the remaining portion directly into the Red Sea.

Salman Zafar is the Founder of EcoMENA, and an international consultant, advisor, ecopreneur and journalist with expertise in waste management, waste-to-energy, renewable energy, environment protection and sustainable development. His geographical areas of focus include Middle East, Africa, Asia and Europe. Salman has successfully accomplished a wide range of projects in the areas of biomass energy, biogas, waste-to-energy, recycling and waste management. He has participated in numerous conferences and workshops as chairman, session chair, keynote speaker and panelist. Salman is the Editor-in-Chief of EcoMENA, and is a professional environmental writer with more than 300 popular articles to his credit. He is proactively engaged in creating mass awareness on renewable energy, waste management and environmental sustainability in different parts of the world. Salman Zafar can be reached at salman@ecomena.org or salman@bioenergyconsult.com
View all posts by Salman Zafar →
Tagged Almusk, Buraiman Lake, Buraiman Landfill, garbage, Jeddah, Landfill, MSW, Musk, Recycling, Saudi Arabia, sewage, Solid Waste Management in Jeddah, Solid Wastes, waste, Waste Disposal, Waste Management in Jeddah, Wastewater. Bookmark the permalink.

7 Responses to Waste Management in Jeddah