Energy Conservation in Mosques: A Guide

A mosque (or masjid) is a place where Muslims worship and offer prayers round the year. In addition, a mosque plays a pivotal role in Islamic communities worldwide. Mosques have a unique operating schedule and are occupied five different times daily for a period of around 30 – 60 minutes for each prayer (this may differ from one mosque to another). For special occasions like Friday Prayers, Eid Prayers and Ramadan nights, people may stay for longer periods in mosques. In recent years, mosques have become big consumers of electricity due to widespread use of air conditioning, hot water systems, lighting and other energy-intensive appliances. 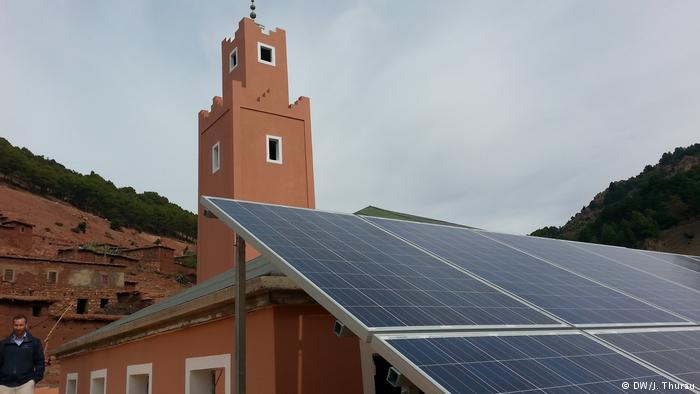 A solar-powered mosque in Tadmamet, a village south of Marrakesh.

The architectural form of mosques developed as a result of different location, culture and environmental conditions, however they are still classified into three types depending on their size and location:

Major electrical loads of mosques consist of Air Conditioning System, Lighting System, Heating System, Ventilation system, Hot Water System, Sound System and some additional refrigerators and water coolers. A wide array of energy-saving measures can be implemented to reduce electricity bills of mosques and transform them into eco-friendly and green mosques. Below are several potential ideas that help in energy conservation in mosques worldwide:

Exploitation of mosque roof, which is mostly big enough, flat and obstacle-free, for rooftop solar photovoltaic systems can meet the energy requirements of mosque, completely or partially.

Installation of advanced thermostats with specific minimum set point, timely programmed, controlled through internet and sensor-based can detect the number of people inside mosques to build a comfort zone.

Based on the space occupancy or people motion inside mosque, the lighting fixtures or HVAC units can be controlled.

An air curtain is a fan-powered device that creates an invisible air barrier over the doorway to separate efficiently two different spaces at different temperatures without limiting the access of the people.

The airtight construction of double-glazed windows creates thermal insulation, which reduces the flow of incoming and outgoing heat, and then less energy used to heat up or cool down the space, resulting in lower energy bills for buildings with large spaces such as mosques.

Water heating is responsible for huge amount of energy consumption during winter months.  By switching from an electric or fossil fuel-based system to a solar-powered hot water system will save energy, lower hot water bills and reduce greenhouse gas emissions.

Separate the daily used area inside mosque from the rarely used ones by adding transparent barriers or walls in order to limit your space and to use the only required loads efficiently.

Natural daylight can reduce energy costs, increase comfort, increase brain concentration and create healthy and calm environment which is essential for worshippers in masjid. This can be easily achieved depending on the big number of windows available in mosque’s domes and walls.

The greywater discharged from a typical mosque includes water originating from ablution basins (Wudu), hand basins, shower rooms and RO-based water filtration systems. Such water can be reused as for irrigation of green spaces, plants and trees surrounding the mosque.

Water leakage can be commonly seen in many mosques and it wastes huge amounts of clean water as well as precious energy. By using sensor-based detectors and regular maintenance for areas prone to water leakage, we can ensure a proper, safe and efficient usage of natural resources.

Mosques is an ideal place for Muslims to reflect on Islamic teachings on environmental stewardship. If we can transform our mosques from an energy-guzzling place to eco-friendly and energy-efficient place of worship, it will be much easier for us to adopt a moderate lifestyle and in building an environmentally-conscious society which can also inspire people of other faiths to care more for the environment and natural resources..

Walid Yassin was born in Lebanon and received the BE degree in Electrical Power and Controls Engineering from Beirut Arab University. He joined Zamil Central Air Conditioners as Design Engineer in 2011 and then he was part of the R&D for product development. In 2017, he was appointed as business development manager for the new business unit known as Zamil Solar and Green Building Solutions.
View all posts by Walid Yassin →
Tagged Air Conditioning, Air Curtain, Electricity, Energy, Energy Conservation in Mosques, Energy Savings in Mosques, Greywater, LEDs, Lighting, Masjid, Mosque, solar, Tips for Green Mosques, Water, Water Heating. Bookmark the permalink.

5 Responses to Energy Conservation in Mosques: A Guide