The Importance of an Environmentally-Friendly Hajj

Despite the spiritual perfection of the rites of the Hajj pilgrimage, there are some deep issues with its practical implementation. In a journey where one is meant to recalibrate one’s consciousness of the one true Creator, it seems paradoxical that such an excursion should lead to environmental harm (or destruction). Why is it then that I walk the street of the Haram (sacred land) and find them littered with boxes of chicken and rice, strewn on the curb in front of beggars who offer to pray for you in exchange of spare change?

A Deluge of Waste

“O children of Adam! … eat and drink: but waste not by excess, for Allah loves not the wasters.”

The Quran has so many verses extolling the environment and natural wonders. Yet ironically, the pinnacle of a Muslim’s spiritual journey, known as Hajj, has become plastered with waste, something which Saudi Arabia has become somewhat notorious for. Much of this also comes from the luxurious European and American tents who really should be bringing with them better codes of conduct as they belong to the so-called developed world. 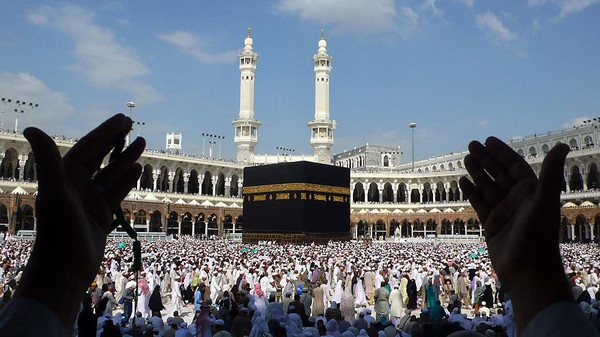 What about the millions of plastic bottles, essential for hydrating Hajj pilgrims, but surely ending up polluting landfills and oceans, destroying countless habitats in Makkah, Madina and surrounding areas? Surely a country with the financial arsenal that Saudi boasts could arrange for sophisticated recycling facilities at least.

In fact, the current sovereign has shown glimpses of visionary marvel, with an expansion project of the Sacred Mosque that will increase its capacity from 1 million worshippers to 3 million – this is happening AMIDST mass congregations every day! I suppose one might argue that throwing $11 billion at a problem is prone to producing miraculous engineering feats. Challenge accepted, I say, let’s green up the Hajj!

For a Mosque buzzing day and night all year around, it is disappointing to see the thousands of fans, bulbs, chandeliers and air conditioners in use practically all the time. Anyone who has even stepped foot in this region could probably point to a pretty abundant source of power – the SUN! That majestic ball of gas has chosen the Gulf as its lover to whom it imparts more magnificent rays than anywhere else.

Yet in a country where oil is cheaper than water, whose got time for solar panels? If the sun’s energy were to be harnessed for the Mecca Metro, surely the smog filled air, congestion, and indefinite waiting times could be avoided in addition to the tons of carbon reduced each year!

With the threat of Climate Change intensifying and an official Islamic Declaration on Climate Change in place, the need for countries to reduce their carbon footprints is becoming imperative. The role of faith groups in opposing environmental degradation cannot be understated, as the recent Papal Encyclical and Islamic Declaration has demonstrated.

Organisations like ARC and GO2015 have come together to produce a Green Guide for Hajj in various languages. We have seen more campaigns mobilizing faith communities on this issue by groups like Islamic Relief, MADE, Christian Aid, and CAFOD.

A vast majority of Hajj pilgrims are not aware of the innate nature of environmentalism within Islam.

By ensuring scrupulous sustainability along every step of the most sacred journey in a Muslim’s life, we are not simply reducing its carbon footprint – we are sending a strong message of leadership to 1.6 billion Muslims that environmental stewardship is an essential aspect of our faith.

The ripple effect an environmentally-friendly Hajj could have on people’s personal lives could change the way the entire Muslim community views the issue.

The pilgrims annually retrace the footsteps of the Prophet Muhammad (peace be upon him); the same man who forbade the excessive use of water even at a riverbank, prohibited the cutting of trees in the sacred lands, and commanded environmental custodianship as a strong tenet of the faith.

It is about time that the Saudi government (and the entire Muslim Ummah) takes a stronger stand towards externalizing the inner spirituality of the Hajj by making it a journey of environmental care, contemplation and benefit.

Shehroze Khan graduated from the University of Nottingham in 2013 with a BSc in Mathematics. He has always had an avid interest in social and political affairs, and been active in student politics. Shehroze has been involved in a number of campaigns and initiates centred on identity and representation, including the University Students Union, the BME movement and campaigns against Islamaphobia. He is currently a Campaigns Manager at MADE, a growing NGO equipping young people with the skills requires for change-making, advocacy and campaigning.
View all posts by Shehroze Khan →
Tagged environment, environmental impact of Hajj, Environmental Stewardship, environmentally-friendly Hajj, Green Hajj, Hajj, importance of eco-friendly Hajj, Muslims, Plastics, Quran, Recycling, waste. Bookmark the permalink.

6 Responses to The Importance of an Environmentally-Friendly Hajj