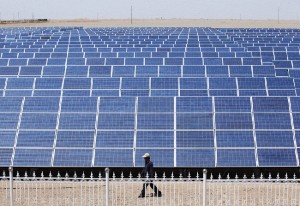 The countries of the Middle East and North Africa (MENA) are known for their abundance of fossil fuels, yet they also have another energy resource at their fingertips – solar power. Some countries such as Saudi Arabia, which have great solar resources, are transitioning to utility scale solar energy production.  This allows them to export more of their fossil fuel instead of using it to produce power domestically. However, the decision to switch to solar power isn’t just to preserve oil resources for export.

The countries in the MENA region are also experiencing increased demand for electricity due to rising populations and economic growth, and many are turning to their abundant solar resources to meet that demand. In addition, many of these regions face water scarcity issues, driving widespread adoption of energy-intensive desalination operations – again, creating an ideal opportunity to deploy utility scale solar operations, lowering the opportunity costs of using oil-powered generation.

What is unique about the MENA countries adopting solar power is that the driving force is not based on subsidies or policy incentives like other countries. Instead, the market is driving adoption because solar has become so cost effective in these regions. Solar energy in the Middle East is now a cheaper source of electricity than burning fossil fuels.  The International Renewable Energy Agency has reported the price of solar in this region has fallen by almost three quarters in the past eight years, and is expected to decrease a further 50% by 2020.

One of the largest oil consuming countries in the world, Saudi Arabia has been burning close to a quarter of the oil they produce. A report published by Chatham House (a British think tank) warned that if Saudi Arabia continued this massive consumption of their oil, they could end up having to import oil by 2038.  Luckily, Saudi Arabia has some of the highest solar insolation levels in the world. This means they receive very intense sunlight, plus they have undeveloped desert, which makes this an amazing region for developing solar power. In 2017 alone, Saudi Arabia announced plans for a 300 MW solar plant, and installing 400 MW of wind energy. Saudi Arabia is planning on installing 9.5 gW of clean energy by 2023 and expects renewables to be generating at least 10% of the power on its grid at that point.

Not to be outdone, the UAE is aiming to hit 44% energy of their energy produced from renewables by 2050. They are currently working on the installation of the world’s largest single location solar plant, the Mohammad Bin Rashid Al Maktoum Solar Park, which will produce 1,000 MW by 2020, and increase its’ output to 5,000 MW by 2030. If this solar park reaches their goal of 5,000 MW, it will contribute 25% of the total energy production in Dubai. In addition, Dubai has created the Dubai Clean Energy Strategy 2050 goals, which aim to make Dubai a center for renewable energy, green economy and to have the world’s lowest carbon emissions by 2050.

Egypt benefits from being a high solar insolation region, receiving between 9 and 11 hours of sunlight every day. Egypt’s renewable energy goal is 20% of it’s energy by 2022, with 2.2% contributed from solar power. Their current plan is to install 3.5GW by 2027, comprised of 2.8GW from photovoltaics and 700 MW from concentrated solar power.

Among MENA countries, Morocco has emerged as a role model for the entire region. The government’s target of 2GW of solar and 2GW of wind power by 2020 is progressing smoothly with the commissioning of the landmark Nour-1 solar power project.

While solar is beginning to take off in MENA, it’s interesting to note the major differences with solar adoption in these countries. The driving force behind much of this renewable energy growth is pure market forces, since solar energy production there is so cheap – this is different from many other countries, where changes in subsidies, policies and industry disputes can whipsaw solar adoption.

However, even though the economics make sense there are still other hurdles to cross such as technical issues, dust and sandstorms (which can greatly impact solar panels’ energy output) and current fossil fuel subsidies in these countries. Major changes to infrastructure don’t happen overnight, but these changes are all promising steps in the right direction for the MENA countries to eventually reap lower electricity costs and a smaller resulting carbon footprint.

Ryan Willemsen is Founder and CEO at Solar to the People. He has been interested in environmental issues from a young age. As solar power has grown rapidly, it became clear that there was a need for an independent source of information that homeowners could turn to when considering solar. To meet this need, Ryan founded Solar to the People to help "shine light" on the solar industry for homeowners.
View all posts by Ryan Willemsen →