Solid waste management is a challenging issue for the Sultanate of Oman because of limited land availability and adverse impacts on environment and public health. With population of almost 3.9 million inhabitants, Oman generates more than 1.7 million tons of solid waste each year. The average per capita waste generation is more than 1.2 kg per day, which is equivalent to about 4700 tons of municipal waste every day.

However the country is yet to realize the recycling potential of its municipal waste stream. Most of the solid waste is sent to authorized and unauthorized dumpsites for disposal which is creating environment and health issues. There are several dumpsites which are located in the midst of residential areas or close to catchment areas of private and public drinking water bodies.

Solid waste management scenario in Oman is marked by lack of collection and disposal facilities as well as lack of public awareness. Solid waste, industrial waste, e-wastes etc are deposited in scores of landfills scattered across the country. Oman has around 350 landfills/dumpsites which are managed by municipalities. In addition, there are numerous unauthorized dumpsites in Oman where all sorts of wastes are recklessly dumped.

Al Amerat landfill is the first engineered sanitary landfill in Oman which began its operations in early 2011. The landfill site, spread over an area of 9.1 hectares, consists of 5 cells with a total capacity of 10 million m3 of solid waste. Each cell has 16 shafts to take care of leachate. All the shafts are interconnected in order to facilitate movement of leachate to the leachate pump.

The project is part of the government’s initiatives to tackle solid waste in a scientific and environment-friendly manner. Being the first of its kind, Al Amerat sanitary landfill is expected to be an example for the future solid waste management projects in the country.

Solid waste management is among the top priorities of Oman government which has chalked out a robust strategy to resolve waste management problem in the Sultanate. The country is striving to establish engineered landfills, waste transfer stations, recycling and waste-to-energy projects in different parts of the country.

Modern solid waste management facilities are under planning in several wilayat, especially Muscat and Salalah. The new landfills will eventually pave the way for closure of authorized and unauthorized garbage dumps around the country. 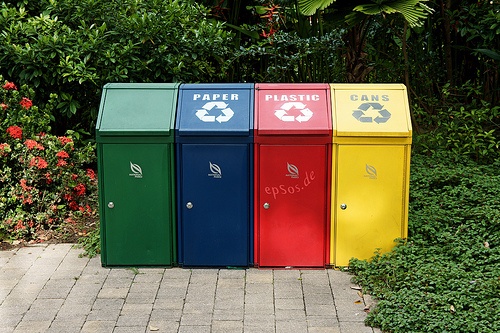 The state-owned Oman Environment Services Holding Company, now known as Be’ah, which is responsible for waste management projects in Oman, has recently started the tendering process for important projects. Be’ah has launched its waste management strategy and has awarded numerous tenders, while a host of other tenders are under evaluation or bidding phase.

Be’ah has invited tenders from specialised companies for engineered landfills, material recovery facilities, waste transfer stations and waste management services in the upcoming Special Economic Zone at Duqm (SEZAD), among others. Among the top priorities is that development of Barka engineered landfill as the existing Barka waste disposal site, which serve entire wilayat and other neighbouring wilayats in south Batinah governorate, is plagued by environmental and public health issues.

Salman Zafar is the Founder of EcoMENA, and an international consultant, advisor, ecopreneur and journalist with expertise in waste management, waste-to-energy, renewable energy, environment protection and sustainable development. His geographical areas of focus include Middle East, Africa, Asia and Europe. Salman has successfully accomplished a wide range of projects in the areas of biomass energy, biogas, waste-to-energy, recycling and waste management. He has participated in numerous conferences and workshops as chairman, session chair, keynote speaker and panelist. Salman is the Editor-in-Chief of EcoMENA, and is a professional environmental writer with more than 300 popular articles to his credit. He is proactively engaged in creating mass awareness on renewable energy, waste management and environmental sustainability in different parts of the world. Salman Zafar can be reached at salman@ecomena.org or salman@bioenergyconsult.com
View all posts by Salman Zafar →
Tagged Al Amerat Landfill, Barka Landfill, Be'ah, Dumpsites, Duqm, Engineered Landfill, garbage, Garbage Disposal in Oman, GCC, Landfill, Oman, Recycling, Solid Waste, Solid Waste Management in Oman, SWM, Waste Management, Waste Management Strategy, Waste Transfer Station. Bookmark the permalink.