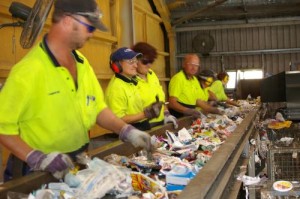 A Material Recovery Facility (MRF) is a building to receive, sort, process and store recyclable materials to be shipped and marketed to end-users. A materials recovery facility accepts materials, whether source separated or mixed, and separates, processes and stores them for later use as raw materials for remanufacturing and reprocessing.

The main function of the MRF is to maximize the quantity of recyclables processed, while producing materials that will generate the highest possible revenues in the market. MRFs can also function to process wastes into a feedstock for biological conversion or into a fuel source for the production of energy.

There are basically two types of MRFs: dirty and clean. A “dirty” MRF receives mixed waste material that requires labor intense sorting activities to separate recyclables from the mixed waste. A “clean” MRF is a facility that accepts source separated or commingled recyclable materials. A “clean” MRF reduces the potential for material contamination.

Each MRF in operation vary in size and configuration. Most counties, cities and non-profit organizations that operate MRFs are small; less than 10 tons recyclables handled daily and less than 15,000 square feet of building space. Total capital costs to construct the facility could be anywhere between $500,000 and $1,000,000.

The difference in cost is attributed to building materials used, site purchase and preparation, entrance doors and size. Many of these facilities are not highly automated. Manual labor is used instead of sorting equipment. The type of processing equipment is basic, such as a vertical or horizontal baler, forklift, glass crusher, can blower, etc.

Large facilities operate more than 100 tons per day, are fully operated, often located in very large cities, and often owned and operated by the private sector. Such MRFs are equipped with highly automated equipment in state of the art facilities and may need several millions of dollar to build.

A major cost to consider in planning for a MRF, in addition to land, construction and permitting costs, is the purchasing of equipment to process the recyclables. The equipment needed will depend somewhat on how the material is brought to the facility. If any material is commingled, sorting lines may be needed. However, if all material is source separated, less sophisticated methods for removing contaminants could be used. The following is a list of some of the equipment that would be needed to operate a MRF.

Bee’ah’s Material Recovery Facility is the largest in the Middle East and ranks the third largest in the world. This specialized facility sorts and separates recyclable materials from municipal solid waste, through mechanical and manual processes. With an annual capacity of 500,000 tonnes, the MRF is currently processing 900 tonnes of general waste, of which an estimated 60% can be recycled and thus diverted from the landfill. One of the highest contributors has been plastic – including PET and mixed plastic, with a 700% increase from March 2010 to 2011, paper and cardboard second at 366%, followed by a 135% increase in aluminum recycling for the same period.

Salman Zafar is the Founder of EcoMENA, and an international consultant, advisor, ecopreneur and journalist with expertise in waste management, waste-to-energy, renewable energy, environment protection and sustainable development. His geographical areas of focus include Middle East, Africa, Asia and Europe. Salman has successfully accomplished a wide range of projects in the areas of biomass energy, biogas, waste-to-energy, recycling and waste management. He has participated in numerous conferences and workshops as chairman, session chair, keynote speaker and panelist. Salman is the Editor-in-Chief of EcoMENA, and is a professional environmental writer with more than 300 popular articles to his credit. He is proactively engaged in creating mass awareness on renewable energy, waste management and environmental sustainability in different parts of the world. Salman Zafar can be reached at salman@ecomena.org or salman@bioenergyconsult.com
View all posts by Salman Zafar →
Tagged Bee'ah, GCC, Material Recycling facility, Materials Recovery Facility, Middle East, MRF, MRF in Middle East, Recycling, recycling equipments, Recycling Facility, Recycling in GCC, Recycling Plant, Sharjah, Waste Management, What is Materials Recovery Facility, What is MRF. Bookmark the permalink.

6 Responses to Introduction to MRF