Coral reefs around the globe are highly sensitive to abiotic and biotic factors that alter the natural balance of the marine ecosystem. This in terms threatens coral species with the effect of ‘bleaching’ which is slowly destroying the coral communities. As the ecosystem deteriorates, this in turn impacts the fisheries industry which in the Arab Gulf is a major source of local revenue and a major food source for the people of the region. 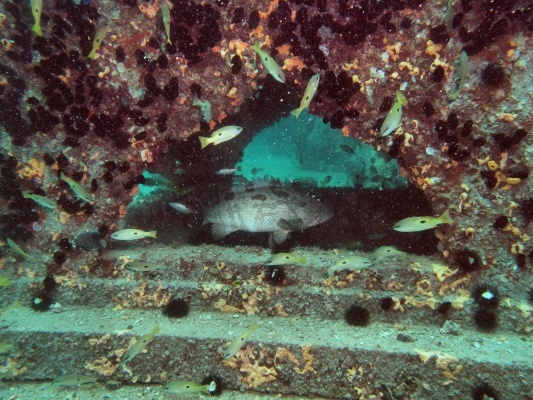 To counteract the susceptible marine ecosystems, a very innovative and creative approach that has been tried and tested in other parts of the globe, has become a strength in reestablishing marine ecosystems in the Arabian Gulf.

Artificial coral reef building approach is one way to mitigate the environmental situations where fish breeding grounds are being destroyed especially by human activities such as overfishing, and island development and land extension along the coast lines. A local company, Al Seef Reef Arabia was established in 2012 in partnership with international partners to design and produce artificial reef units suited for the local environs.

The Magic of Reef Balls

The reef ball is the most widely used design for re-establishing coral reef areas. Within the Arab Gulf, the natural reef has coral “bommies”. The man-made reef balls are similar in design and function creating ideal environs for both juvenile and adult fishes. The reef balls provide safe and nutrient rich habitats for fish to bred and grow into full-sized mature species.

The reef balls are made of a marine grade concrete mix of high strength (50+ MPA). There are no toxic chemicals added to the mix and the life expectancy of the reef balls in the Arab Gulf is anticipated to be in excess of 100 years. The balls range in size from as small as 20 kg right up to 9 tonnes. The ball shape is the standard design, but indigenous designs are also explored and experimented with.  It is hoped that they will be an added feature in the tourist industry. 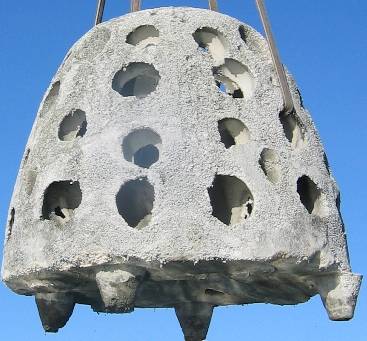 The artificial reef balls have other benefits as well as repairing fish habitats and assisting in replenishing local fisheries. The artificial reefs are hardier and more resilient, so once habitats are re-established, the reefs will provide more diving opportunities for both locals and tourists.

Because the Gulf is a major region for oil production which impinges on the coastal waters, as well as the shipping of oil and its byproducts, the marine environment is subjected to harsher factors that degradade the local marine environment. The artificial reefs make a major contribution to reestablishing and strengthening these environments. As well as enhancing the local fisheries and coral regions, the reef balls can also provide beach protection and act as breakwaters in areas subjected to more aggressive wave action.

The changing climate also has its natural impact as temperatures steadily creep higher each season. There can also be increased levels of toxicity and salinity in the surrounding waters due to anthropogenic activities. Man is able to give nature a hand with these artificial structures.

With government support, the local company has been able to deploy 4,500 reef units since 2014. There are a total of ten reef complexes now deployed in Bahrain coastal waters.  The main objective was to re-establish fish breeding grounds that provide a safe environment for juvenile fishes to mature and ultimately replenish the fish stocks and secure the local fishing industry.

Potential sites for the establishment of artificial reefs are first identified. The areas are then studied and investigated directly with scuba divers and remotely with drop-down video camera, as well as by conducting fish surveys of the area. After a full hydrodynamic assessment of the area is conducted, then plans are devised for restorative action through the placement of the artificial reef balls. Monitoring is conducted on a quarterly basis to record and quantify the re-establishment of various fish species, especially those species that are most favoured in the fishing industry.

As the artificial reef balls projects are still in the early stages, details regarding exact location and the level of restoration is not released to the general public nor scientific community. We will all have to wait a little longer before quantitative evidence is made available to the community at large.

Dr Claire Cosgrove, Ph.D., is an independent Environmental Scientist and Educator. Looking to establish a consultancy company: “Cultural Awareness, Environmental Mindfulness”. Formerly a Professor of Environmental Sciences in the College of Engineering at AMA International University, Salmabad, Kingdom of Bahrain. Before moving to the Middle East in 2009, Dr Claire was a Research Scientist based in the USA at the University of Virginia, Charlottesville and at Georgia Institiute of Technology in Atlanta, Georgia. Dr Cosgrove has lived and worked in a number of countries such as South Africa, USA, New Zealand and the Middle East. Her research work has covered air pollution, weather modification /cloud seeding, rainfall modelling and simulation and flood forecasting, to name a few areas of interest.
View all posts by Claire Cosgrove →
Tagged Arabian Gulf, Artificial Coral Reef Building, Artificial Reefs, Bahrain, Benefits of Reef Balls, Fishing, Fishing Industry, Marine Ecosystems, What are Reef Balls. Bookmark the permalink.

2 Responses to Artificial Reef Construction in the Arabian Gulf