The concept of a circular economy has been gaining a lot of momentum on the agenda of many countries in recent years. In its core, it describes an economic model which opposes the current so-called linear economy, where output is produced, used and disposed at the end of its lifespan. In contrast, circular economy advocates suggest a model in which raw materials used during the life cycle of a good are completely reintegrated into the production process.

Circular economy, therefore, means more than just to recycle your old appliances, but includes considerations about how to redefine products and services in order to minimize negative impacts. 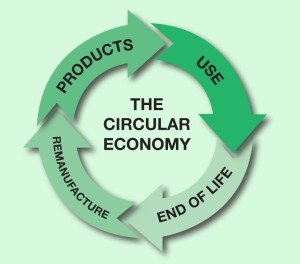 In a world with finite resources, non-renewable raw materials will be depleted in a few decades. At the same time, available landfills for accruing waste material will be exhausted. In order to tackle both of these developments, circular economy uses nature’s material cycle as a role model. Through the cascading use of materials the concept aims to achieve production with minimal waste and emissions.

Circular economy gained attention as a concept because it provides an opportunity to conserve resources, energy and thus prevent climate change, but at the same time is compatible with economic growth, job creation and a raising standard of living. Because economic growth is decoupled from growth of resource use, it finds supporters with different backgrounds.

Circular Economy has been around for centuries

It is important to note that circular economy is not a complete novelty. It was the rapid economic development and a tendency towards “throw-away-societies” in the Global North that lead to the “rediscovery” of the concept in the end of the 20th century. Original human economic activities in agriculture have always been circular, feeding production waste (e.g. excretions) and residues (straw, ashes) back into the production cycle. In certain traditional economic systems in countries of the Global South, this concept is still in use.

Progress Around the World

In other parts of the world, circular economy is also a widely discussed subject. China for example passed a law for the Promotion of the Circular Economy already in 2008, and circular economy objectives are featured in the Chinese five-year economic plans.

A detailed country study for the economic potential of a circular economy development path for has been published last year for India, one of the largest emerging economies. The report shows that such a path would bring India annual benefits  of US$ 624 billion in 2050 compared with the current development path. This study basis its conclusions on economic analysis of three important areas for Indian economy and society: cities and construction, food and agriculture, and mobility and vehicle manufacturing.

Momentum in the GCC

In general, there is not much circular economy momentum visible when analyzing current legislation in GCC countries. As the legislative frameworks in the Arabian Gulf countries are different than those of Western countries, issues such as recycling and environmental protection are not among the state priorities.

Among the GCC countries, UAE has the most ambitious plans. Their Vision 2021 includes ambitious targets on the treatment of waste, the development of renewable energy and water recycling, which are all policies to support a transition towards a more circular economy. Furthermore, the emirate of Dubai aims to increase recycling rates and attain 75 percent waste diversion from landfills by 2021, which is an ambitious goal. Among GCC nations, UAE has the most ambitious plans for transition to circular economy

It is no coincidence that the focus of UAE’s 2021 vision targets waste. Circular economy strategies employed in many emerging and also in developing countries nowadays are falling under the category of waste management. This is mainly due to two reasons: waste is first of all an apparent and tangible problem, and secondly it requires substantial investment in infrastructure and personnel.

Potential and Challenges in the Gulf States

Research has shown that a circular economy development path can have substantial additional economic benefits for emerging economies, and furthermore reduces negative externalities. Moreover, the relative scarcity of resources other than oil and gas in the Gulf states would provide an incentive to embark a path towards a more circular economy. The concept has the potential to lead to reduced waste production, a smaller dependence on imports of raw critical materials; more employment opportunities as well as decreased environmental impacts.

However, GCC member states face also major challenges when implementing circular economy policies. With an economy lacking diversification and without a major share of manufacturing industry, some areas where there would be levers to apply circular economy concepts are not existing.

Ellen MacArthur Foundation. (2013). Towards the Circular Economy: Economic and Business Rationale for an Accelerated Transition.

Rafael Widmer is Project Associate at the World Resources Forum, a Multi-Stakeholder Platform for knowledge exchange on resources efficiency, circular economy and recycling. He is a graduate student at Sciences Po Paris and the University of St. Gallen (Switzerland) majoring in Environmental Policy and International Affairs & Governance with a regional concentration on the Middle East. Rafael is currently writing his thesis about eco-entrepreneurship in MENA countries. He is passionate about developing solutions to fulfill sustainability potential in the Middle East.
View all posts by Rafael Widmer →
Tagged Benefits of Circular Economy, China, Circular Economy, Circular Economy in Gulf Nations, Circular Economy in the UAE, Europe, GCC, Global North, India, Industry, Linear Economy, Manufacturing, Manufacturing Industry, UAE, Waste Diversion. Bookmark the permalink.

One Response to Circular Economy in GCC: Potential, Prospects and Challenges