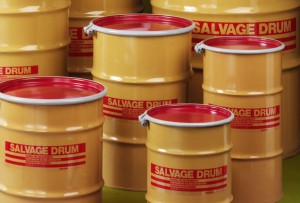 The United Arab Emirates signed the Basel Convention* in November 1992 and established a legislation called ‘Regulation for Handling Hazardous Materials, Hazardous Wastes and Medical Waste (Law 24 of 1999)’. Article 12 of the law states ‘Transportation and disposal of locally produced hazardous waste through land borders, marine environment limit and air space shall be controlled in accordance with the rules, procedure and controls mentioned and specified in Basel Agreement and in coordination with Federal Environmental Agency’.

UAE is not yet a signatory to Basel BAN amendments of Sep 1995 thus there is no mention of the Basel BAN amendments in the current federal legislation. At emirates level, various legislation were passed to organise the waste management sector in each emirates. Abu Dhabi passed the Law 21 of 2005 concerning Waste Management in emirate of Abu Dhabi. Centre of Waste Management is the Competent Authority to monitor and manage the transportation of hazardous waste in the Emirates.

The UAE Government is encouraging private companies for e-waste recycling. Major electronic distributors have established e-waste collection centres and subsequent transfer to established facilities. However, good fraction of e-waste is still collected in an unorganised manner and exported to South and Southeast Asian countries.

Shipment of hazardous waste coming into UAE is being well-monitored and well-controlled. In recent past only a single incident of mixed plastic waste was reported. The waste was imported through Dubai ports to be treated at a facility in Ajman. The Dubai government objected to import and the issue was raised at Environment Agency (UK). As a result, the transporting company was fined about GBP 75,000.

UAE has efficient law enforcement machinery. Thus after the establishment of CWM in 2008, there has been significant improvement in waste management in general and hazardous waste transportation in particular. Further impetus is required by the government to invest into the better treatment/storage facilities for e-waste, nuclear waste and other such waste. The legislation shall also be made more illustrative to check the aberrations regarding trans-boundary movement of hazardous waste.

Salman Zafar is the Founder of EcoMENA, and an international consultant, advisor, ecopreneur and journalist with expertise in waste management, waste-to-energy, renewable energy, environment protection and sustainable development. His geographical areas of focus include Middle East, Africa, Asia and Europe. Salman has successfully accomplished a wide range of projects in the areas of biomass energy, biogas, waste-to-energy, recycling and waste management. He has participated in numerous conferences and workshops as chairman, session chair, keynote speaker and panelist. Salman is the Editor-in-Chief of EcoMENA, and is a professional environmental writer with more than 300 popular articles to his credit. He is proactively engaged in creating mass awareness on renewable energy, waste management and environmental sustainability in different parts of the world. Salman Zafar can be reached at salman@ecomena.org or salman@bioenergyconsult.com
View all posts by Salman Zafar →
Tagged Abu Dhabi, Basel Convention, CWM, Dubai, e wastes, Electronic Wastes, GCC, Hazardous Waste in UAE, Hazardous Waste Management, Hazardous Wastes, Industrial Waste, Medical Wastes, Middle East, Petrochemical Wastes, UAE, United Arab Emirates. Bookmark the permalink.

2 Responses to Hazardous Wastes in UAE