Everything You Should Know About Hydroponic Farming

Locally grown vegetables and salad greens are becoming increasingly common in the market places of Bahrain, thanks to modern agricultural practices such as hydroponic farming. Bahrain is now taking definite steps towards being self-sustaining with certain food items that frequent our dinner table. By adopting the alternative agricultural practices, Bahrain is actively tackling the issue of food security.

One such successful operation occupies a land area of 180,000 sq m and is aiming to produce in excess of 5,000 tons of fresh foods annually.  The operational polythene greenhouse covers 40,000 sq m with production increasing from the initial 250kg per day to 1,500kg per day. 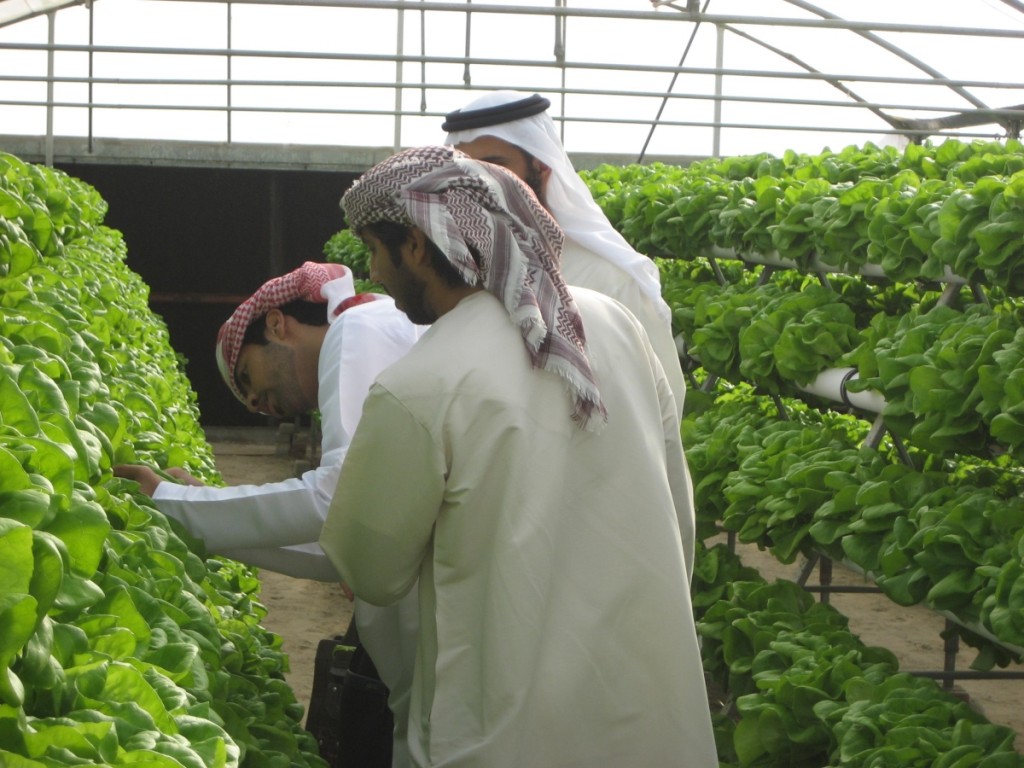 Hydroponic farming has a lot of plus factors especially when practiced in an arid environment, such as Bahrain. It is the solution for growing plants where soil nutrient quality, salinity and water scarcity are limiting issues. It is also a perfect solution in countries or regions where the amount of arable land is very limited, apart from being an ideal solution in regions where  there is ample light, even if it is also enhanced by artificial lighting.

In Bahrain, the total amount of arable land is only 11% of the total land area (according to the 2014 AFED Annual Report, Food Security in Arab Countries). The soil on the island has high salinity content, with poor water retention ability and limited nutrients so the managed environment of hydroponic farming is an ideal alternative.

What is Hydroponic Farming

As stated above, the process is managed, not simply controlled. Therefore, it is water efficient and nutrient efficient, both of which are delivered directly to the plant’s root structure. Because the levels of water and nutrients are monitored, these elements are supplied as and when needed at the required levels.

Together, water and nutrients contribute to the success of and rate of growth. The lighting factor is also critical in crop production. This is achieved by planting out in vertical structures where lighting is maximized while plant density, crowding and shading are minimized. Present day hydroponic farming embrace the 3-D approach and are grown vertically in multilevel growing beds.

So now we have ideal growing conditions in terms of nutrients, water and light, plus the ability to grow in the vertical. This adds significantly to the yield per unit area as the growing area is no longer 2-dimensional (2-D) but has become a 3-D concept and design.  This maximizes the actual growing area and uses what could have been unutilized areas in enclosed gardening environments.

With a multi-level bedding structure that is movable, plants can now be exposed to ideal lighting at all times throughout the growing period. This controlled and managed growing environment also has significant advantages over traditional farming techniques.

A well designed hydroponic system is characterized by less wastage of water and nutrients than soil-based farms. Both water and nutrients are feed directly to the root structure of the plants and recycled through the hydroponic system. This also eliminates the typical land and water pollution possibilities due to overland flow and runoff, respectively. This all means the system uses less water and less nutrient supplies. Both of these aspects provide great economic benefits by lowering the ongoing costs of cultivation. This is of key importance in regions ranked as having extreme scarcity of water, such as Middle East nations. 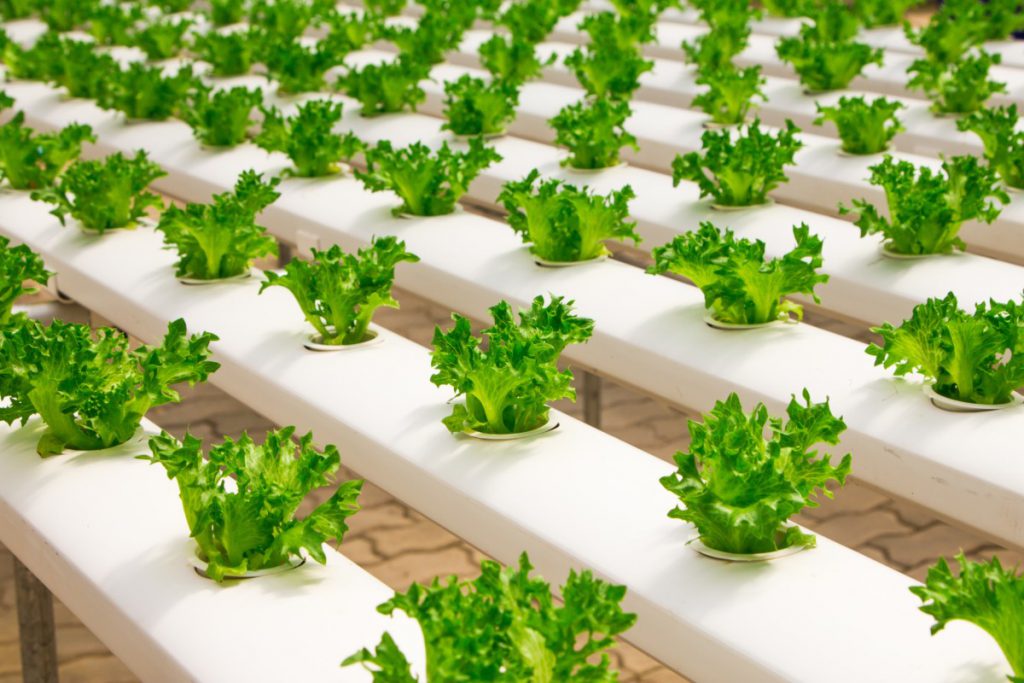 In the absence of the soil medium, the likelihood of disease is largely reduced. This is another plus factor. Traditional farming methods are soil based. The work intensity if soil-based farming is very different to hydroponic method. Traditional farming involves the tilling and cultivation of the soil. Both  of these activities are time consuming and labour intensive prior to the actually growing season. Other plus factors of hydroponic farming are due to the management of the density of plants and the humidity of the growing environment.

As these factors are all managed,  there is no need for fumigation of the plant crop nor for weeding. There are no microorganisms as there is no soil stratum. There are no leaf eating predators because of the managed enclosures. Therefore, hydroponics is becoming the agrarian farmer’s dream. In short, the nature of the farming work load is greatly reduced in comparison to the traditional farming practices.

The physical hydroponic growing environment is akin to the concept of greenhouse gardening but on a much larger scale with automatic rotation of the beds for maximum light exposure at all times, as well as the loading and unloading of vertical growing beds in highly controlled growing environments.  The traditional greenhouse, also known as a hothouse or glasshouse, concentrated solar heating while ventilation was manually operated by opening and closing window panels,  and lighting was natural and diurnal.

The planting medium was soil so the usual plant-soil issues were present and water was supplied often in over abundance. Humidity and condensation were ongoing issues that needed to be addressed but were not totally managed in a greenhouse as such. The conventional style of greenhouse is now supplanted by the vertical A-frame growing systems. Lighting is no longer solely dependent on natural light sources but uses LED and sulpha plasma lighting systems.

The challenges are still present and very real. The biggest challenge is related to the ambient temperatures surrounding the greenhouse. Controlling the internal temperatures of the greenhouses has required elaborate and advanced ventilation and cooling techniques. The technology of the whole enterprise is not just a local initiative but has required international cooperation and partnering with expertise from the UK, Japan, the Netherlands and many other parts of the globe.

In addition to new and improved technology and modern agricultural practices, the level of staffing is also modernized with highly trained and conscientious workers who understand the production system and the challenges of working in a laboratory style environment.

Growing greens in the desert climate of Bahrain is not a fantasy but a reality.

Growing foods in the desert of Bahrain is a reality with a sustainable future.

Dr Claire Cosgrove, Ph.D., is an independent Environmental Scientist and Educator. Looking to establish a consultancy company: “Cultural Awareness, Environmental Mindfulness”. Formerly a Professor of Environmental Sciences in the College of Engineering at AMA International University, Salmabad, Kingdom of Bahrain. Before moving to the Middle East in 2009, Dr Claire was a Research Scientist based in the USA at the University of Virginia, Charlottesville and at Georgia Institiute of Technology in Atlanta, Georgia. Dr Cosgrove has lived and worked in a number of countries such as South Africa, USA, New Zealand and the Middle East. Her research work has covered air pollution, weather modification /cloud seeding, rainfall modelling and simulation and flood forecasting, to name a few areas of interest.
View all posts by Claire Cosgrove →
Tagged advantages of hydroponic farming, Bahrain, Greenhouse, Greenhouse Gardening, Humidity, Hydroponic Farming, hydroponic farming in bahrain, hydroponic vs traditional farming, Hydroponics, What is Hydroponics. Bookmark the permalink.

One Response to Everything You Should Know About Hydroponic Farming