During the last few decades, sustainable development emerged as a hot topic in many reform agendas and strategic management plans in Jordan. The picture is not always optimistic where poverty, climate change and wars to name but a few of the continuous burdens, yet, some results have been successfully reaped. In this article, I will provide a reflection on the sustainable development journey in Jordan. Firstly, what the country achieved from the year 2000 to 2015 and secondly, what challenges the country has to counter from the year 2015 to 2030. 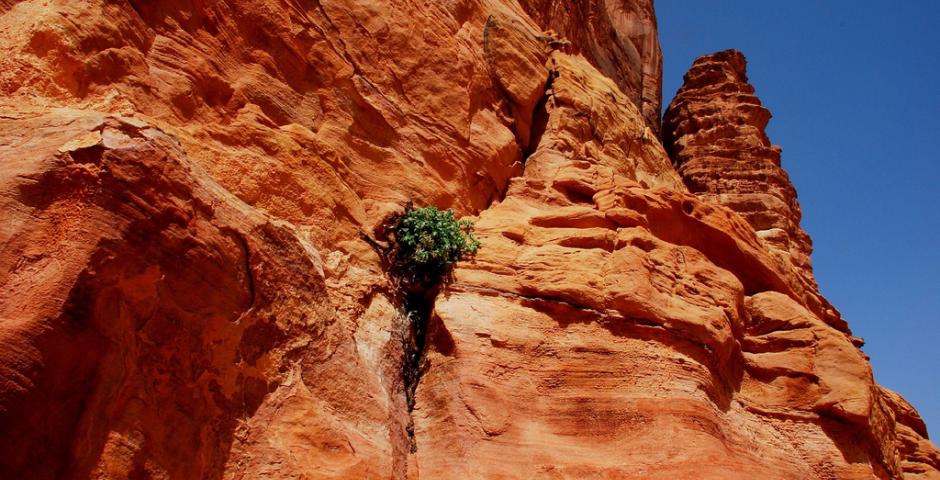 Jordan has embraced every single opportunity to create a significant change in each of the three pillars of the sustainability; social, economic and ecological.

Firstly, on the social sustainability pillar, the country was ranked as 77th among other 187 countries in the HDI (Human Development Index) by the end of October 2015 [1]. One of the main initiatives was the development of 3-year Executive Development Programs (EDPs) to set agendas and manage them in areas such as unemployment and poverty [2]. As a result, the country managed successfully to reduce the poverty rate from 21% to 14.4% for the period from 1997 to 2012, increased literacy rate to 93.3% across the country and reduced the infant mortality rate (which represents the number of death for infants under one year) to 17 per 1000 infants [3].

Secondly, on the economic sustainability pillar, and despite of the volatility around Jordan which affects the availability of external investments negatively [3], the country adopted new laws that enhanced investments and created a competitive business environment such as the new tax law, the new electronic transactions law [2] and the competition law [1]. The results were shown in the growth of the GDP by 3.1%, the reduction in the inflation rate by 2.8% and the increase in the export growth rate by 9.4%  by the end of 2014 [1].

Thirdly, on the ecological sustainability pillar, Jordan implemented rigorous steps to face the severe water condition in the country.  For example, Jordan started one of the world’s most unique water desalination projects, or what is called “Red Sea-Dead Sea” project, in order to pump the water from the Red Sea to the Dead Sea. The difference in the elevation between the two seas will be used to generate hydroelectricity which will be used in the desalination process and hence providing safe drinking water to the local community [2], [4]. As a result, 99% of the population will have access to a safe drinking water [3].

In order to continue the sustainable development journey in Jordan, the country has to overcome different challenges as the following.

Firstly, on the social development side, the three main challenges are the growth in the number of the population, the healthcare agenda and the commitment to the human rights especially women rights. Statistics revealed that the number of population was doubled since 1980, and this includes the increased number of refugees in Jordan over the last three decades. The Syrian crisis alone created 4 million refugees to neighbor countries and 8 million internally displaced in five years.

Jordan hosts 1.4 million Syrian refugees, therefore, it is considered the largest recipient for Syrian refugees who resulted in impact with USD 6.6 billion as direct and indirect costs [2], [3].This growth creates a pressure on the limited natural resources and the current infrastructure [3]. Similarly,  the official statistics in regards to the healthcare in the country showed that only 77% of Jordanian citizens are covered by health insurance pension [1] and the official numbers for the unemployment rate revealed that the unemployment rate for females is twice more than what it is for males [1].

Secondly, on the economic development side, the two key challenges are reducing the country’s dependency on the external financial support (i.e. financial aid, long-term loans, and grants) [1], and reducing poverty rate where  2% of the population are living on less than 3 USD per day [1].

Thirdly, on the ecological development side, the four crucial ecological areas in Jordan are water scarcity and the climate change, the wastewater sewer network and sanitation, land degradation and desertification and finally, the dependency on imported energy from other countries. Starting by the water scarcity and the climate change; according to the official meteorological forecast in Jordan, the country is predicted to have an increase in evapotranspiration by 3%. That also is expected to be combined with a decrease in the rainfall by 15% and an increase in the demand for irrigation water by 18%. As a total, the available water in Jordan is expected to be decreased by 30% by 2035 [3]. Not also the climate change is the major contributor to the water scarcity, but also the domestic misuse of water resources and the increasing number of Syrian refugees who consume approximately one million liters of water on a daily basis [1]. In regards to the sanitation issue; the current wastewater treatment network is not capable to handle all the wastewater discharge in the country. Official numbers state that only 63% of the population is connected to a public sewer system. This also means losing the opportunity of collecting, treating and reusing the wastewater for other beneficial uses [3].

Moving to the land degradation challenge, the country has to deal with the increasing impact of land degradation that resulted due to improper use of the lands, soil erosion, poor solid waste disposal practices and the immigration from rural to urban areas [3]. Finally, the country lacks the needed resources to generate electricity, therefore, around 96% of its fossil is imported [3].

In a small country like Jordan, surrounded by many challenges as I illustrated above, our hopes are still high to achieve the Sustainable Development Goals by end of 2030 and hence creating a better future for everyone in the country.

Ayat Saleh has worked in one of the largest FMCG companies in the world, where she held different roles in projects management, quality management and environmental sustainability. Ayat holds a bachelor's degree in Industrial Engineering and a master's degree in Engineering Business Management. In addition to that, she holds other qualifications such as Project Management Professional (PMP), Six Sigma Black Belt, ISO 14001 Lead Auditor and an Environmental Certificate from the National Examination Board in Occupational Safety and Health (NEBOSH). Her personal website is http://www.ayatsaleh.com
View all posts by Ayat Saleh →
Tagged Dead Sea, Economic Development, Health, Jordan, Land Degradation, Poverty, Refugees, Sanitation, Social Development, Sustainability, Sustainable Development Challenges in Jordan, Wastewater, Water, Water Scarcity. Bookmark the permalink.

One Response to Sustainable Development in Jordan: Perspectives