With changing weather patterns of frequent and intense rainfall, regions in the Middle East are struggling to cope with the influx of rain and stormwater runoff that often flood roads and residential areas. While a good network of surface drainage systems enforced with concrete, pipes and manholes may alleviate the situation, city planners can now adopt the use of more sustainable and environmentally beneficial methods to decrease urban flooding in the Middle East. This technique of utilising natural drainage systems to improve water management is also referred to as Sustainable Drainage Systems (SuDS). 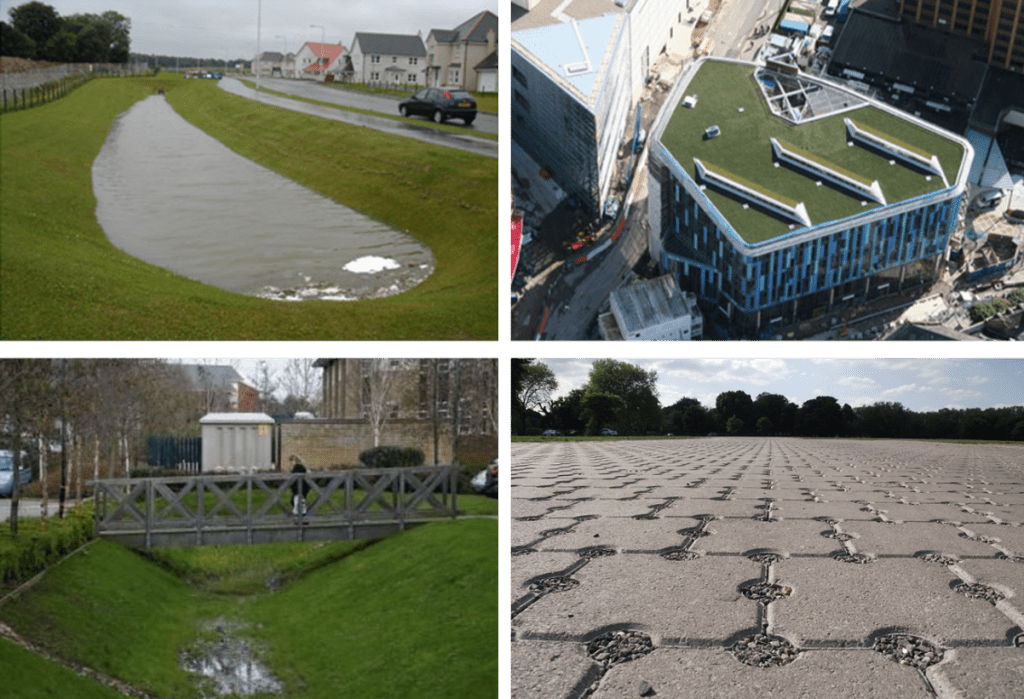 As seen in the above figure, SuDS involve varied forms of drainage systems, usually classified into four categories – storage, infiltration, conveyance systems and permeable surfaces. For instance, detention ponds and trenches are used to collect and store runoff and gradually infiltrate into the soil and groundwater.

Similarly, permeable pavements are used to decrease runoff by providing increased surface area for absorption and infiltration. Green roofs used atop commercial buildings store water through infiltration but also provides additional benefits such as cooling the building and increasing biodiversity of the area.

The benefits of implementing sustainable urban drainage systems can be categorised into water quantity, quality, amenity and biodiversity. Different types of SuDS are usually used in combination to take maximise the physical and ecological benefits.

In terms of water quantity, SuDS can be used in conjunction with current drainage systems to lower stormflow. This can be done through retrofitting which includes disconnection of roof water runoff to pipelines and instead connected to green roofs or other permeable surfaces.

SuDS have also been effective in tackling pollution from non-point sources, thus improving the water quality. For instance, studies suggest that the use of grass swales has been effective in absorbing pollutants such as PAHs (polycyclic aromatic hydrocarbons) that have more affinity towards soil, and as such reduces the pollutant levels in stormwater runoff.

Furthermore, the implementation of green roofs not only helps mitigate stormwater flow but also encourages urban biodiversity through growing pollinator friendly flora. The use of permeable pavements and other infiltration surfaces help to recharge groundwater with clean stormwater that would have been naturally filtered as it passes through these gravel structures. Additional benefits of SUDS include improvement of air quality and increase in recreational spaces for communities.

However, one of the major limitations for sustainable urban drainage systems is their need for large surface areas especially in cities where open space is an expensive and decreasing resource. As such, studies suggest combining both green and grey infrastructures such that the SUDS are retrofitted into the current urban structures. These not only reduce the overflow into receiving waters but also facilitate the use of sustainable systems within urban structures.

In addition, for regions in the Middle East with lower amounts of annual rainfall, it will be challenging and expensive to maintain these natural drainage systems, that will require water and land resources to keep it thriving.

Moreover, while the use of SuDS allows for pollutant absorption, the amount of these pollutants within soils could be detrimental to microorganisms and may also infiltrate into the groundwater causing drastic effects. As such, regions in the Middle East will have to conduct further research into the types of endemic vegetation for SuDS that can withstand both harsh climates and pollutants in the Middle East whilst also acting as storage units in case of sudden rainfall events.

Mishma Abraham holds an MSc in Environmental Technology from Imperial College London, where she specialised in understanding the public acceptance of carbon capture and storage technologies. She also has a BSc in Environmental Science from Queen Mary, University of London, where she focused on assessing carbon storage in London's urban forests. During her academic degrees, she was involved in the universities' sustainability initiatives and community outreach programs, which motivated her to pursue a career within the sustainability and CSR sector. Post her Master's course, she interned with Corporate Citizenship, a global sustainability consultancy headquartered in London, and worked on various client projects on ESG issues monitoring, benchmarking and strategy development.
View all posts by Mishma Abraham →
Tagged Benefits of Sustainable Drainage Systems, Natural Drainage, Rainfall, Stormwater, SuDS, Surface Drainage, sustainable drainage systems, Sustainable Urban Drainage System, Urban Flooding. Bookmark the permalink.