Transportation sector has played a prominent role in the socio-economic development of Kingdom of Saudi Arabia. However, there are a wide range of current and future issues which should be tackled to ensure sustainable development in the country. More than 75% of the total population of Saudi Arabia lives in urban areas. Given the worldwide trends and statistics on urban population growth, many have regarded the 21st century as the urban century, understanding the prominence and importance urban areas have played and will continue to play in the future.

Therefore, the Kingdom of Saudi Arabia must focus its attention in the re-planning and re-designing of existing cities in order to absorb the pressure of increasing urban populations, in a manner that will improve environmental sustainability and energy efficiency. In re-fitting urban areas of Saudi Arabia for expected expansion, the future of urban transportation will be a much needed but thoroughly thought-out strategy to ensure the cities’ lifelines are able to cope with the needs and demands of the increasing urban population. 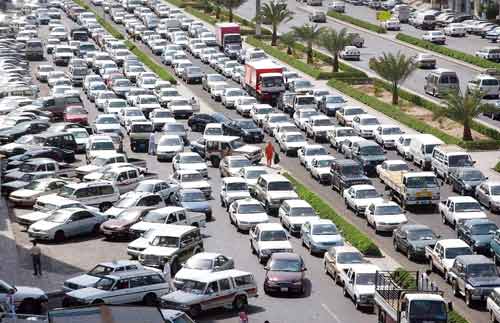 Accordingly to a 2014 article published in The Peninsula Times, Saudi Arabia had 15.9 million licensed cars at the end of 2012. The article also mentioned that an analysis by Al-Eqtisadiah (a Saudi newspaper) estimated that the number of cars was expected to increase to 18 million in 2014. Therefore if we were to do a ‘rough’ calculation using the projected number of cars for 2014 and the total population of persons in 2013, then for approximately every two persons there is one licensed car.

For urban areas, a ‘rough’ calculation using the 2010 urban population figure and the ‘roughly’ calculated ratio of one licensed car to approximately every two persons, means that if at present, over 22.9 million people live in the urban cities, then there is a high probability that there are over 11.4 million licensed cars in the urban areas of the Kingdom of Saudi Arabia.

The reality that such figures exist in the Kingdom for licensed cars in urban areas, solidifies the importance of reviewing present modes of urban transport. Such modes of urban transport must be seen as energy efficient, compact, aesthetically pleasing, safe, reliable and environmentally-sustainable. A key area in applying such type of urban transport is through the urban public transportation system. This can be done through the implementation of urban mass transit systems, for example, bus and extensive rapid railway systems. Such systems will encourage the city inhabitants to forego personal vehicles for public transport.

Fortunately, the Kingdom is well on their way in this regard, having an already functioning public bus and railway system. These two public systems are governed under two separate organizations, Saudi Arabian Public Transport Company, and Saudi Railways. Saudi Arabian Public Transport Company has an inter-city and inner-city bus system, while Saudi Railways is responsible for passenger railway transport in the Kingdom. The railway organization has many projects in the pipelines and is working on implementing their Master Plan, which speaks of the creation of a railway for urban transportation, Urban Transit.

Even though the Kingdom is in the process of planning to implement extensions of those transport systems on a larger scale for urban areas, that type of infrastructure will take a number of years to complete. In the interim, simpler alternative modes of public transport, which can bring about positive changes to the country’s urban transportation sector, can be installed and implemented. One such alternative is a bike –share system. Although it is seen as child’s play, bikes have traditionally been used for transport.

However, with a bit of innovation and creativity, bike-shares having smart and green technology have popped up all over the world, in many of the mega-cities with huge success. In the case of Saudi Arabia, new city developments and economic zones can easily incorporate such a system into their plans and designs. The bike-share concept can also be incorporated on university campuses and other large-scale development centres throughout the Kingdom.

There are numerous advantages to a bike-share, such as improved health, air quality, urban environment and urban aesthetics. The Kingdom can successfully create its own version of a fashionably green urban bike-share system but it will require support from all stakeholders, especially the city dwellers.

Aside from the current usage of the public transport system, a lot more can be done to promote and encourage modes of public transport, as well as other initiatives to ‘nudge’ the urban population to reduce the number of personal cars in cities. One such initiative could be, ‘Use Public Transport Day’ or ‘Car-pool Day’.

Another approach to ‘nudging’ urban residents to reduce the need for cars, can be through the installation of pedestrian zones or pathways, where the entire roadway of a certain part of the city is free of cars, allowing for a better flow of pedestrian traffic. These along with many more examples, can be found in case studies on cities like Mexico City, Copenhagen, Malmo, Curitiba and Vancouver.

Prioritising and revitalising urban transport in Saudi Arabia is indeed a requirement as the urban population increases. It is encouraging to see Saudi Arabia taking strides to increase modes of urban transport for cities. However, the Kingdom needs to implement short and medium term strategies that will get the urban population to begin transitioning from conventional modes to environmentally-sustainable modes of transport. The needs of future urban populations are what should be considered by traffic and transportation planners, not future projections of the number of cars.

We must begin to think of the future needs of the population, in particular the urban population, for more proactive solutions to emerge in the transportation sector in Saudi Arabia, especially in big cities like Jeddah, Riyadh and Dammam.

Faheema Mohammed is an environmental enthusiast from Trinidad and Tobago. She has a MSc in Science and Management of Tropical Biodiversity and BSc degree in Biology, and Environmental and Natural Resources Management from the University of the West Indies, St. Augustine Campus. She has also studied Occupational Health and Safety, Marketing and Public Relations. Her interest focuses on urban transportation, urban planning, green economy, eco-tourism, sustainable development, climate change, environmental law and policy, and environmental education. She loves start-up companies and non-governmental organizations keen on social and environmental responsibility. Faheema likes to think of herself as a novice environmental entrepreneur and hopes of one day owning her own environmentally-conscious business.
View all posts by Faheema Mohammed →
Tagged Bike-Share, Cities, Pedestrian Traffic, Public Transport, Railways, Saudi Arabia, Transportation, Urban Population, Urban Transport, Urban Transport Trends in Saudi Arabia. Bookmark the permalink.

4 Responses to Future of Urban Transportation in Saudi Arabia