Egypt occupies 7th position in the list of countries with the most mismanaged plastic waste, according to a recent report published in Science magazine. The report was based on data collected in 2010 and one must wonder whether the results of the report would have been different if the zabbaleen had been allowed to continue their work unhindered. 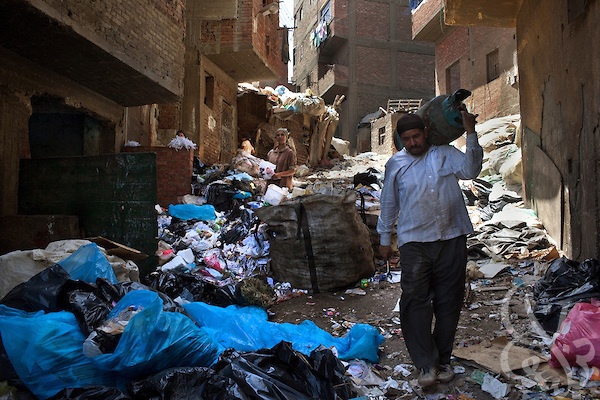 A History of Zabbaleen

The zabbaleen, or garbage collectors, are the descendants of farmers from Upper Egypt who moved to Cairo in the 1940s. Together with another migrant group, they have made a living in Cairo collecting, sorting, salvaging, and recycling the waste of the city’s nearly 20 million residents. With the help of NGOs, the zabbaleen recycled up to 80% of the waste they collected, more than three times the amount of waste recycled by garbage collectors in major cities in developed nations.

The zabbaleen collected the garbage free of charge; they were part of Cairo’s informal public sector. Their work was not supported by the government. Their income came from selling the recyclable material and from the pigs they raised on the organic waste. Many residents also gave monetary tips to the garbage collectors. This meager income barely supported the zabbaleen, who live together in different settlements around the city, all of them extremely poor.

Believing the zabbaleen’s system to be backwards and unhygienic, in 2003, the government sold contracts to three multinational companies (and one local company) to collect Cairo’s waste, pushing the zabbaleen out of the system. These companies were required to recycle only 20% of the waste collected, the other 80% making its way to landfills. It did not take long for residents to complain about this new service. They now had to pay for their garbage collection and that did not include door-to-door pick-up. There were not enough bins in the streets to hold all the waste and streets quickly filled with the overflowing garbage.

The new companies simply could not keep up with the waste being produced. Not only did this have a devastating effect on the waste management situation in Cairo, it destroyed the zabbaleen’s way of life as they lost access to the garbage that was the foundation of their economic activities. At one point, the private companies realized they needed the zabbaleen and tried to subcontract them, but the zabbaleen were highly underpaid and the system failed. Some residents, though, continued to hire the zabbaleen on their own. 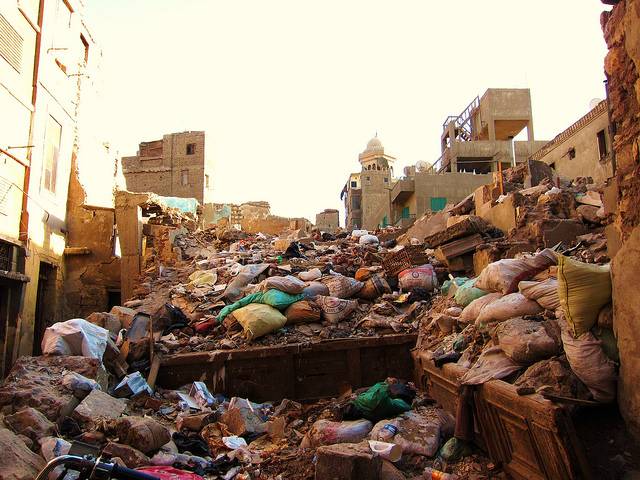 Adding to both the city’s garbage woes and the plight of the zabbaleen, in 2009, in response to the H1N1 influenza outbreak, the government ordered the culling of all the zabbaleen’s pigs. These pigs were an essential part of the zabbaleen’s recycling program. The pigs consumed all of the organic waste that was sorted from the garbage. When they lost their pig herds, the zabbaleen stopped collecting organic waste and the effect was felt almost immediately. Again, residents complained about the trash piling up on the streets. The trash piles became home to rats and disease. And once again, the zabbaleen suffered as they were no longer able to earn enough money to support themselves and had lost an important food source.

Change is in the Air

Since the 2011 revolution, many changes have taken place in Egypt, spurred on by environmentally-minded individuals, small businesses, and new government ministers. One of the more hopeful changes involves the collection of garbage. The government has finally implemented a proposal for officially employing the zabbaleen, replacing the international companies with smaller zabbaleen-run companies. Once registered, the local companies are given uniforms, government vehicles and business training from an NGO. The system had a test-run and debuted in a few areas late last year. If successful, there are plans to expand over the next two years. This is good news for Cairo’s waste management and even better news for the zabbaleen.

Other private-sector initiatives are tackling recycling as well.  Recyclobekia is a new company that offers electronic waste recycling services. The company collects, sorts, and dismantles e-waste – old laptops, computers, cameras, phones, and more – and in return companies and individuals are given credit for an online shop or even cash if they recycle more than 500 kg of waste. GreenTec is an exciting recycling initiative that offers Automated Recycling Machines. With these machines, individuals can deposit their plastic water bottles and receive credit for their mobile phones.

Another new venture coming out of Cairo is Refuse, a company that upcycles plastic bags and creates backpacks, tote bags, laptop covers, and other accessories with this waste. They also offer workshops to teach others how to upcycle.  Gamayit El-Misbah El-Mudii, started in 2005, provides free collection and recycling of paper, plastic, glass, and other items. They collect from individuals, schools, and businesses. Resala, a charity organization, also offers recycling services. As these initiatives and companies continue to grow, so will the awareness and action of individuals in terms of waste management and recycling.

While our local and national authorities attempt to improve the collection and recyling of our waste at the city level, it is important to remember that we as individuals can do a lot as well. The first and simplest action we can take it to sort our trash into organic and non-organic waste. Our garbage collectors, whoever they may be, will appreciate this effort and it will keep any paper or board waste clean so that it can be recycled. Once you’ve sorted your trash, make sure it’s getting recycled. If the zabbaleen do not collect in your area, contact one of the organizations listed above. The most important action we can take is to reduce the amount of waste we are creating in the first place. Less waste produced means less waste needing to be managed.

We can start by refusing to use or purchase disposable plastic. Bring your own reusable bags to the supermarket so that you don’t need the plastic ones. Invest in a water filter and a reusable bottle so you can drink your tap water and skip the plastic water bottles. Avoid buying food packaged with polystyrene; it’s not recyclable. Read this ocean facts for kids and guide to a plastic-free life and search other websites for tips and ideas on reducing plastic waste. You’ll find that most of the suggestions will be better for your health and the health of our environment, and at the same time, save you money. If we all do our part by taking these steps, perhaps Egypt won’t make the top ten list of worst plastic offenders again.

Bernadette Simpson, M.Ed., is an educator and author currently living in Dahab, a small town in Egypt's South Sinai. Inspired by her passion for nature and desire to improve the local environment, Bernadette began researching and implementing ways that individuals can reduce their own plastic footprint. In 2013, to help raise awareness about the problem of plastic pollution, she began writing the Don't Mess with Dahab blog, which focuses on strategies and practical advice on reducing the amount of harmful disposable plastics in our world. Visit her website, www.bernadettesimpson.com, to learn more.
View all posts by Bernadette Simpson →
Tagged Cairo, Egypt, garbage, Garbage Collector of Cairo, History of Zabbaleen, Plastic, Solid Waste Management in Egypt, Trash, Wastes, Zabbaleen. Bookmark the permalink.