Water crisis in the West Bank and Gaza is largely overshadowed by the overall political tension between Palestine and Israel. However, the ever-growing water conflict between the two sides is a major impediment to reaching a just and peaceful resolution to the Palestine-Israel conflict, and an essential component for the creation of an independent Palestinian state.

Ever since the Nakbah (Day of Catastrophe) in 1948, Israel has sought to control the main sources of water, and after the 1967 conflict Israel has managed to control all of the major water sources it shares with Palestine and other neighboring countries such as Lebanon, Syria and Jordan. These sources include the Jordan River, Yarmouk River and the underground water reservoirs underneath the West Bank.

Let us take a close look at water crisis in the Palestine: 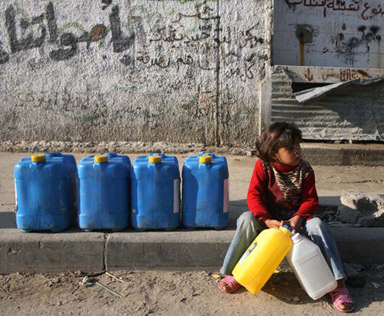 The rampant discrimination in utilization of water resources is evident with Palestinian farms relying on inconsistent rainwater to irrigate their crops, and illegal Israeli settlement farms using state-of-the-art irrigation systems. Despite controlling 100% of the water flowing from the Jordan River, Israel is using 85% of the water from the aquifers within West Bank territory while  Palestinians are receiving a pitiful 15%.

Though theoretically Palestinians could drill more wells to help sustain their crops, they are forbidden to do so without acquiring permits from the Israeli occupation forces. These permits are difficult, if not impossible, to obtain forcing Palestinians to rely on Israeli authorities for access to their own water. This has lead to per capita water consumption in the West Bank to be approximately 73 liters, whereas Israel’s per capita water consumption is approximately 242 liters. In other words, per capita use in Israel is three and a half times higher than in the West Bank.

Responding to reports reflecting the injustice in water resource distribution, the Israeli government states that it has responded to the needs of the Palestinians and has increased the quantity of water provided to them far beyond that specified in the Interim Agreement. However, what it fails to mention is that 60% of the water it provides is sold to the Palestinians at inflated prices, which most civilians cannot afford.

Since the blockade imposed on Gaza in 2006, it has been dealing with constant raids, bombardment, and attacks from the Israeli occupation forces, hindering any kind of development that might be possible. One of the greatest sectors affected by continuous Israeli aggression is water supply and sanitation. 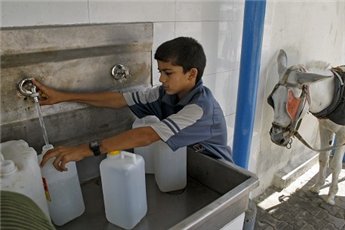 Water supply and sewage infrastructure are often damaged leaving the area without proper sanitation and without a reliable water source. This has a large effect on Gaza’s only source of water – the coastal aquifer underneath the Mediterranean Sea coast shared by Gaza, Israel and Egypt. Israel’s blockade of the Gaza Strip has pushed the already ailing water and sewage system to a “crisis point”.

Reports published by the World Health Organization (WHO) suggest that 95% of this water is unfit for consumption due to the lack of proper sanitation, and that Gaza could become unlivable as early as the year 2016. The good news is that World Bank and Islamic Development Bank have recently approved $6.4 million and $11.14 million respectively for the development of the Gaza’s water and sewage infrastructure to improve extensively damaged sanitation facilities and highly contaminated water supply.

Financial assistance from Arab world and international agencies can provide a big boost to improve living conditions in Palestinian areas but do not represent a sustainable solution to the problems at hand. The first problem requiring immediate attention is the unjust distribution in water resource use. To ensure peaceful resolution to the conflict between Palestine and Israel, there must be an equal distribution of water allowing enough water for development and basic human needs of the Palestinians.

Another major hurdle is the Israeli policy of stifling development activities in Palestinian areas. The inhuman blockade of Gaza and construction of the “separation barrier” around the West Bank give Israel full control over the resources entering and exiting Palestinian territories. Much of the land cut off by the West Bank barrier is land with good access to a major aquifer. This greatly restricts any plans for the development and construction of proper sanitation and water storage/extraction facilities that may allow Palestinian cities and villages to communities to flourish.

A recent report by Amnesty International says that on average Palestinian daily water consumption reaches 70 litres a day, compared with 300 litres for the Israelis. Many Palestinians barely get 20 litres a day – the minimum recommended even in humanitarian emergencies. To conclude, the problem at hand is not the lack of water in the region, but the uneven distribution of water resources between Palestine and Israel.

3 Responses to Water Woes in Palestine