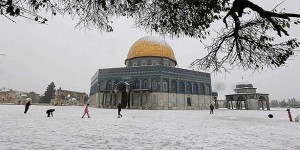 The year 2013 saw history being made when Storm Alexa swept across the Middle East and North Africa bringing blizzards, torrential rain and icy winds to a region that hasn’t experienced such a storm in over 100 years. Storm Alexa caused devastating floods in Arab cities, such as Gaza, and power cuts in certain areas of Jordan. Heavy snowfall in Jordan covered the streets, hindering mobility and forcing people into their homes for several days. The storm has also brought hardship and misery upon the Syrian refugees enduring the bitter cold in fragile tents and makeshift shelters.

However, with no intention of belittling or undermining the aforementioned difficulties and suffering, such a storm could be beneficial in terms of one aspect: the water it brings to the region. Storm Alexa brought an abundance of water to a region suffering from severe water scarcity. The effects of water scarcity are rapidly being felt across the region, with water shortages affecting countries such as Palestine, Egypt, and Jordan. Therefore, this outpour of water could bring some respite in terms of water availability in these MENA countries, with rainwater runoff and snowfall being large sources fresh water. Sadly these sources have been very poorly managed causing floods, and snow-covered streets.

Flooded rainwater has mixed with wastewater triggering an overflow of wastewater throughout local cities and towns. This has produced adverse health problems among the resident populations, who are calling out for rapid solutions to their strife. One solution that can be utilized is harvesting floodwater and the large amounts of snowfall available. Harvesting such water sources would help reduce the effects of water scarcity, and reduce physical harm to cities and towns.

Once these water sources are collected, they must be treated before they are reused. Once treated, the water can be used for a variety of activities such as irrigation or any type of domestic use.

Over the course of the storm, Amman has seen ample amounts of snow and rainfall that have put the city in what seemed like a standstill. Residents were snowed in unable to go to work and perform their daily routines. The streets were covered with snow that reached up to 3 feet, making it very difficult to move about. Although the snowfall had its detrimental repercussions, it is a source of freshwater.  Harvesting it would have been a fairly simple procedure.

Harvesting and treating these water sources eases the effects of water scarcity even if for a short time period. This is beneficial in several ways:

Needless to say, wastewater treatment has its downsides. First, it is energy intensive and financially demanding. Second, it requires very advanced technological capabilities. Third, it requires a large area in which it is to be implemented. With the exception of Jordan and a handful of other countries in the region, not many have the economic and technological capabilities to undergo this type water management.

The problem is further exacerbated by the political strife the region is currently experiencing. Countries such as Syria and Palestine have more political constraints than others that do not allow them to use this water source to its full potential.

However, there are simpler ways to treat wastewater that are not so economically and technologically reliant. Such techniques require a large area where the excess rainwater is allowed to be stored for a certain period of time, which allows the waste to settle at the bottom of the area (in which the water is stored). The water is then passed through a large filtering screen that removes the remaining waste and bacteria from the water. This method does not treat water as thoroughly as wastewater treatment plants, but it treats it enough for it to be reused for certain water intensive practices (e.g. irrigation, washing machines, showering).

Water scarcity has become the most dangerous threat the world is facing. Water scarcity in MENA is further intensified as it only holds 1% of the usable water resources in the world, while having 5% of the world’s population. With regional population set to increase even further, water scarcity is likely to increase, with predictions indicating that the MENA region will run out of water by the year 2050.

Although harvesting the water provided by Storm Alexa does not provide a long-term solution to water scarcity in the region, it offers a short-term respite from its effects. This gives countries more time to plan ahead and to develop further in their quest to mitigate water scarcity. With scientists indicating that such storms are to become even more rare due to the effects of climate change, there are good opportunities to use these events for the welfare of mankind.

One Response to Storm Alexa – Positive Aspects for MENA