The latest outbreak of locusts over eastern Africa has been ongoing since the beginning of this year. It is considered by the Food and Agricultural Organization (FAO) of the UN as the worst outbreak of locusts in 70 years. The threat of the desert locust is extreme urgent as it’s a major threat to the food security in the region. Bearing in mind, that this region is extremely vulnerable to the predominant subsistence lifestyle. 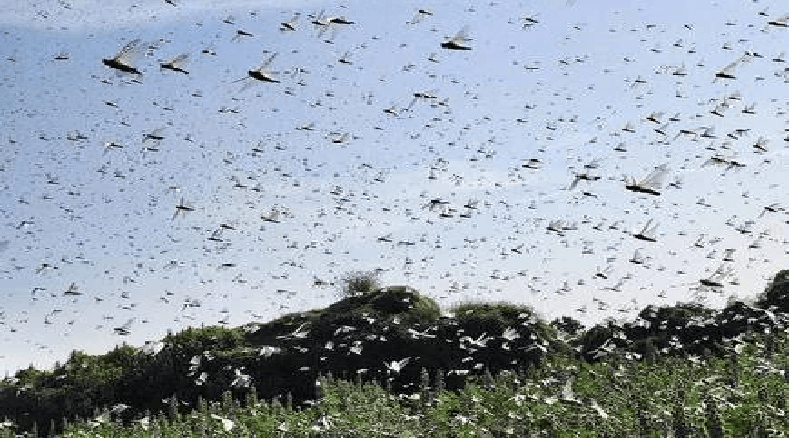 It also appears that new breeding may have occurred in Ethiopia, Kenya and Somalia which will intensify the infestation. The question that are foremost in minds of ecological scientists and agriculturalists is what is the relationship between climate change and the locust infestation? Is there a correlation and is it manageable?

Locust numbers diminish by two main process: through migration or through the natural occurrence of mortality. The desert locust is typically found in the semi-arid and arid deserts of Africa, and in the Near-East and South-West Asia. These are regions that usually receive less than 200 mm of annual precipitation.

But over the past two decades, temperatures have been rising significant above the long-term average temperatures. These hotter conditions appear to be giving rise to more aggressive. More destructive swarms of locusts. This would also imply bigger swarms of locusts which are totally devastating across eastern Africa. Higher temperatures are also associated with above normal rainfall. The numbers show that some of the fastest warming countries on the globe are in Africa. Rainfall in some areas within this region have been 400 per cent above normal rainfall. These two factors, temperature and moisture and favouring increased breeding of the locust. These increased rainfalls are attributed by the intensified Indian Ocean dipole. And this meteorological phenomenon is enhanced by climate change globally.

Therefore, the basic ingredients for a natural disaster tending to biblical proportions maybe very near at hand.

Africa is very vulnerable to the effects of climate change and any aberration from what would be labelled as typical or normal weather patterns. The vulnerability of this large land mass is due to the overall low levels of socio-economic development. People live depend on subsistence farming. When there is limited rains, extreme or prolonged high temperatures, severe weather systems, subsistence farming lifestyles are extremely vulnerable to any changes in climatic factors. They are already highly vulnerable to conditions of poverty, but such a natural occurrence of a swarm of locusts ensures their poverty for the following seasons. They lack the resources to be able to overcome such devastation in the next season.

The desert locust in their vast numbers ravage the crops, devour the wild plant life depriving both humans and animals of basic food supplies. These means that both food crops and animals are wiped out. Their whole livelihood disappears and places them on the starvation timeline. These subsistence farmers do not have the means, resources or the equipment to manage or control such infestations. 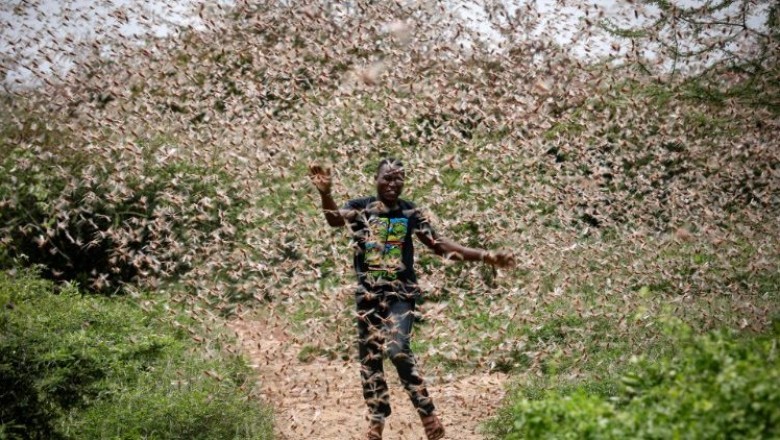 The sizes of the swarms are so massive. The preventive treatment process would need to be actioned much earlier in the season and is dependent on expensive organophosphate chemicals, pesticides that are applied on vehicle-mounted sprayers or by aerial spraying. Knapsack and back mounted hand-held sprayers would be just too ineffective.

There is research into biological control or non-chemical control. But with the spatial extent of these swarms plus the number of individual creatures makes control measures a massive challenge. Plus the fact that the locust is mobile and can move quite rapidly from location to location. The current research is more focused on insect growth regulators. This is in preference to widespread spraying of pesticides which may also target beneficial insects that are active in fruit pollination or as companion species that manage and control less invasive plant eating species. Also, aerial or ground sprayed pesticides are also a threat to human health.

People and birds can and do eat locusts but the number of the insects is so immense, that its not manageable by natural enemies. This is not a viable control measure.

The number one threat from a locust invasion is food security. The primary concern and basic need are to be able to provide food to those areas devastated by the insect invasion.  Whether forecasting can warn or alert regions that may be subjected to atypical occurrence of the swarms such as the recent locust infestation in the Middle East where the shamal winds carry the locusts across Saudi Arabia into the neighbouring countries such as Bahrain and Qatar.

The big organizations such as FAO are set up to provide early warnings of the locust situation and forecast weather conditions that might enhance the breeding conditions or the movement of such swarms. But this is an alert or warning system regarding imminent danger. There is advanced technology whereby farmers can use solar dyers to harvest their crops earlier and so preserve a significant portion from an early harvest because of the potential onset of a locust attack. But this is cost prohibitive for subsistence farmers and villagers.

The situation is fearful for the local communities who are very aware of the imminent threat of starvation from loss of crops and animal livestock. Their hope is severely targeted. The outcome is dire.

One Response to Desert Locusts Are Swarming With Greater Ferocity