In mid-January 2021, Iraqi President Barham Salih approved the country’s decision to join the Paris Climate agreement. Iraq signed on to the international climate accords in 2016 but has spent the past few years negotiating its ratification through its parliament. The Paris Climate agreement encourages signatory countries to cut their carbon emissions and invest in the sustainable energy sector. Such a move might prove difficult for Iraq, a country in which oil provides 90% of government revenue and amounts to 99% of national exports.

Despite these challenges, Iraq has now committed to modernizing and decarbonizing its energy sector for its growing population. By joining the Paris Climate accords, some Iraqi environmental activists hope that the central government might turn its attention to addressing one of the nation’s most infamous ecological problems, the southern Iraqi marshes. 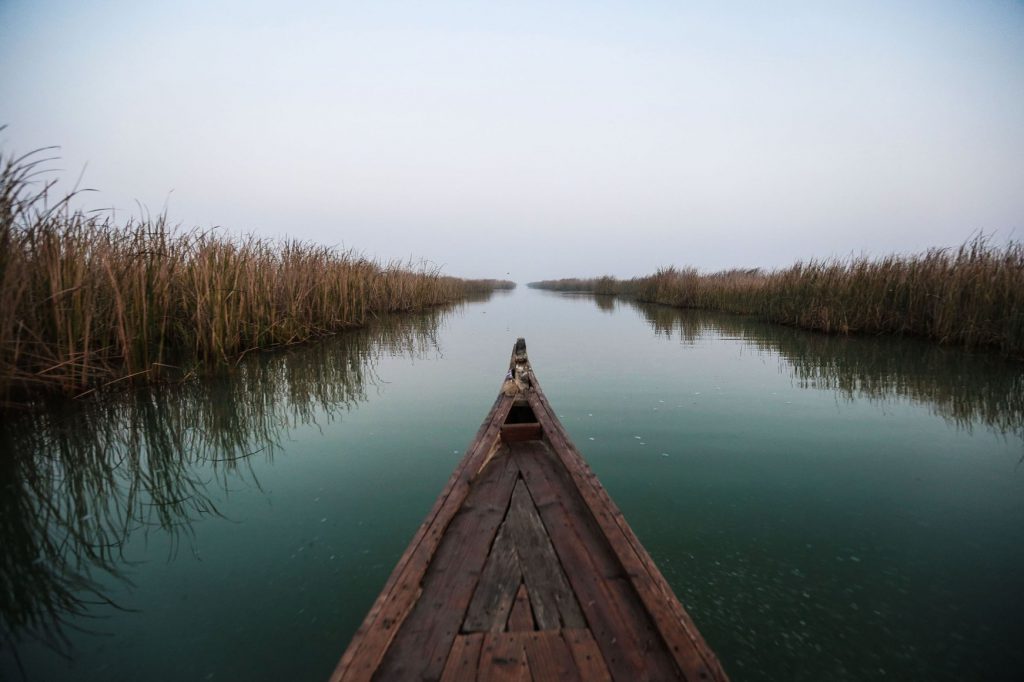 The Mesopotamian Marshes form a significant part of southern Iraq as well as some of south-western Iran. The marshlands once covered over 15,000 square kilometers and were home to between 300,000 and 500,000 people. Local inhabitants formed a unique culture such as constructing communal buildings of woven reeds called mudhif. People who lived in the marshes historically worked growing rice, raising water buffalo, and fishing.

Inundated by the Tigris and Euphrates rivers, the marshes were a unique site of environmental diversity. Of particular note is the diversity of aviary species who nest in the marshes as they migrate. The marshes are also home to a multitude of fish species, wolves, and otters.

Efforts to drain the marshlands began in the mid-20th century. Originally, the British administrators of Iraq thought to drain the marshes to reduce malaria carrying mosquitos and make the land suitable for other crops. When the Ba’athist party controlled Iraq, the drainage of the marshes accelerated as water from the Tigris and Euphrates was diverted to other irrigation projects. By the 1980s, the Iraqi government began to drain areas of the marshes to explore oil drilling operations. Damming projects in Iraq and Syria upriver also contributed to the slowly disappearing marshlands in southern Iraq. In response, the Iraqi government began resettlement programs which took locals from their land and disrupted their cultural practices.

The late 1980s and 1990s unfortunately saw the near obliteration of the marshlands. Anti-government Shia insurgents and marsh inhabitants fearing the destruction of their heritage used the marshlands as a base for their small scale resistance. Iraqi heavy war machinery could not infiltrate the marshes and thus could not pursue retreating militants who operated a hit-and-run style insurgency against the Saddam regime. Historically, the Iraqi marshlands served as a refuge for other anti-government fighters such as during the Zanj rebellion against the Abbasid Caliphate in the 9th century or the Beni Lam resisting the Ottoman government in the 19th century.

In response to the 1991 uprising against the Iraqi government, Saddam Hussein began rapidly draining the marshlands. It is clear that his true intention for draining the wetlands was to punish the marsh population for supporting the rebellion as his soldiers targeted villages in the marshes. His efforts effectively drained 90% of the wetlands by 2001. The draining of the marshes resulted in both ecologic and communal suffering. Over 200,000 Iraqis living in the marshes were displaced. It also led to environmental damage including increased desertification and salinification of nearby waterways and soils. 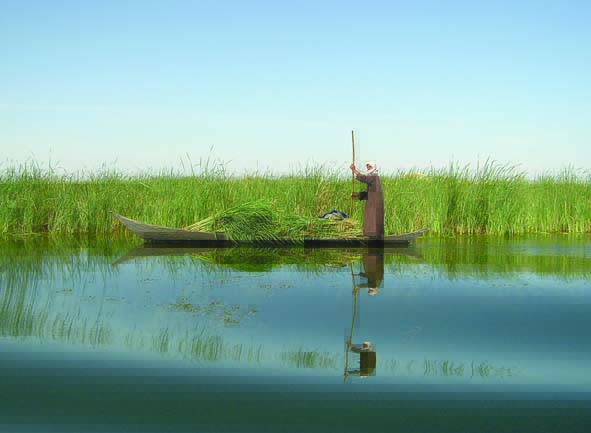 After Saddam Hussein’s regime fell, efforts to rehabilitate the marshlands began. Around 40% of the marshes were inundated again by 2004. According to a report made by the United States Congressional Research Service, the American government looked to invest in marshland restoration projects in southern Iraq. Despite the reflooding attempts from the Iraqi government with assistance from USAID, the biodiversity of the marshes did not return in full as the sections of marshland that were inundated did not connect to one another.

Beginning in 2005, Iraqi environmentalist groups such as Nature Iraq partnered with the Italian government to commence the “New Eden Project”. Basing the name on the conception that the land between the Tigris and the Euphrates housed the Garden of Eden due to the region’s fertility, the New Eden Project seeks to advocate for the local marsh population, restore biodiversity, and study the region academically. Such academic studies have produced detailed maps of the region and scientific research on the progress of restoring the marshlands.

Other efforts to protect the marshlands come in the form of international recognition such as the marshes obtaining the status of a UNESCO Heritage Site in 2019 and being designated as Ramsar Wetlands in 2007. In July of 2020, the United Nations Development Program funded a project by an Italian NGO to protect the culture of the marshes and promote it as a location to tourists in the Dhi Qar governorate. The hope is that the project, called the “Sumerian”, will boost economic and educational opportunities for locals by bringing in eco-tourists and good quality environmental jobs. Additionally, the Ministry of Water Resources in Iraq has a designated task force called the Iraqi Marshlands and Wetlands Recovery Center which assists in regulating and rehydrating marshlands.

With Iraq now closer to joining the Paris Climate agreement, the country faces both challenges and opportunities. Iraq must move its economy off its current dependency on oil. Some of the oilfields themselves sit on land that was previously marshland. To achieve this, Iraq would be able to access more international funding to invest in green energy projects. Once Iraq joins the Paris Climate accords officially, the next step will be creating a national climate action plan.

Hopefully, environmental organizations in Iraq and those abroad with interests in restoring Iraq’s southern marshlands will be able to influence the national climate plan to protect the wetland’s culture and biodiversity.

Bret Windhauser is a researcher in Middle Eastern Studies. As an undergraduate student, he double majored in International and Global Studies and French. He went on to receive his master's degree in Near Eastern Languages and Civilization focusing on Arabic and Turkish. He currently teaches Arabic at the University of the South in Tennessee and transcribes Ge'ez manuscripts.
View all posts by Bret Windhauser →
Tagged Biodiversity, Iraq, Marshes, marshlands, marshlands in southern Iraq, Mesopotamian Marshes, New Eden Project, Saddam Hussein, southern marshlands, wetland. Bookmark the permalink.