Among the world scriptures, the Holy Quran provides a unique resource for building a new ecological paradigm. Grounded in the Abrahamic tradition, it presents a harmonious view of nature reminiscent of the Far East. In the Quran, “whatsoever is the heavens and on the earth glorifies God” (59:1; 61:1; 62:1; 64:1). “The stars and the trees prostrate” (55:6), “the thunder hymns His praise” (13:13), and “unto God prostrates whosoever is in the heavens and whosoever is on the earth, the sun, the moon, the stars, the mountains, the trees, and the beasts” (22:18). In these and many other verses, the whole of creation is presented as a Divine symphony, for “there is no thing, save that it hymns His praise, though you do not understand their praise. Truly He is Clement, Forgiving” (17:44). 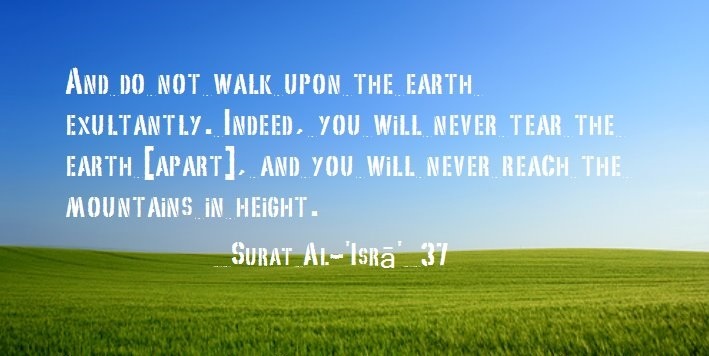 Common Cause of Humanity

According to the latest results from the Pew Research Center, by 2050, over 60% of the world’s population will be Christian or Muslim: 29.7% will be Muslim and 31.4% will be Christian. Muslims and Christians have no choice but to come together to work for the common cause of humanity in confronting this unprecedented challenge. Moreover, to take root in humanity any sustainable ecological worldview must incorporate and address the teachings that much of humanity seeks to follow. As Pope Francis observes, the solutions cannot come from science and technology alone.

Relevance of the Papal Encyclical

Pope Francis’ encyclical on the environment, Laudato Si (“Praised Be”), is a clarion call to all of humanity. It also provides an important opportunity to expand the conversation regarding the relationship between religion and the environment. Many scientists maintain that we have reached “decade zero” for addressing climate change. We thus have no choice but to mine the riches of all the world’s traditions to create new paradigms and new solutions to environmental degradation. As the encyclical states, “We need a conversation which includes everyone, since the environmental challenge we are undergoing and its human roots, concern and affect us all.”

The Papal Encyclical provides an unprecedented opportunity for the people of the world’s faith traditions to turn away from the corruption we have wrought and open our hearts to one another and to the plea of Mother Nature. For her fate will be determined by the decisions of our generation. By drawing upon the shared teachings of our traditions, humanity can again learn to honor the immutable rights of rivers, animals and trees, as well as human beings suffering inhumane working conditions. By bearing witness of our own transgressions, we can reverse our course and ensure that the rights of God’s creation prevail over the transient interests of corporations. As Pope Francis observes, we have no choice but to take this direction and to work with one another.

For Muslims and Christians, the place of human beings is not to subdue the earth. It is to hear the patterns already established within nature and live in harmony with them, had we but eyes to see and ears to hear. In both Christianity and Islam, human beings are presented as stewards of the earth. In the Quran, this responsibility is both an honor and a trial.

Verse 6:165 states, God it is Who appointed you stewards upon the earth and raised some of you by degrees above others, that He may try you in that which He has given you. From this perspective, being stewards of nature is about our responsibility toward God, not our dominion over creation. Neither the Bible nor the Quran has any place for what Pope Francis calls “a tyrannical anthropocentrism unconcerned for other creatures.

We will thus be held accountable for the degree to which we have carried out our function as stewards. As the Prophet Muhammad (SAW) is reported to have said, “The world is a green and pleasant thing. God has made you stewards of it, and looks at how you behave.“

Given the state of the environmental crisis and the alarming increase in environmental degradation, one cannot but conclude that contemporary humanity has failed this test. The world and our children can no longer afford the cost of our failures. It is thus time that people of all faiths unite and in the words of Martin Luther King, “rededicate ourselves to the long and bitter, but beautiful, struggle for a new world.”

Joseph E. B. Lumbard is Assistant Professor of Classical Islam at Brandeis University and a General Editor for The Study Quran (HarperOne 2015). A specialist in Quranic Studies, Sufism, Islamic philosophy, Islamic ecotheology and comparative theology and former Advisor for Interfaith Affairs to the Jordanian Royal Court, he is the editor of Islam, Fundamentalism, and the Betrayal of Tradition (2nd edition, 2010) and author of Submission, Faith and Beauty: The Religion of Islam (2009), and Love and Remembrance: The Life and Teachings of Aḥmad al-Ghazālī (2016).
View all posts by Joseph Lumbard →
Tagged Bible, Christians, Ecological Paradigm, Environmental Crisis and the Holy Quran, God, Islam, Muslims, Papal Encyclical, Pope Francis, Prophet Muhammad, Quran. Bookmark the permalink.

8 Responses to The Holy Quran: A New Ecological Paradigm