The Harmful Impacts of Tire-Burning Kilns

Decorative arts such as woodworking, weaving as well as ceramics and other pottery have a long and honored tradition.  In fact, some of the earliest examples of pottery originated from the Middle East from the time of 6500 BC. In order to meet the ceramic industry’s high energy demand, much of the developing world, MENA in particular, is resorting to cheaper alternatives such as fueling kilns by burning tires and other harmful materials. Though modern technology has led to clean and efficient kiln usage in the developed world, these options come with a high price tag when referring to industrial demands for ceramics and other fired products.

Burning of tires and other rubber materials as a primary source of energy for kilns is particularly concerning.  In other areas of the world, like India, where the concerns lie in the harmful effects of coal-fired kilns, areas like Morocco and other North African countries are dealing with harmful impacts of tire burning. While burning tires does provide an efficient source of energy, the harmful effects of such burning far exceed the benefits. 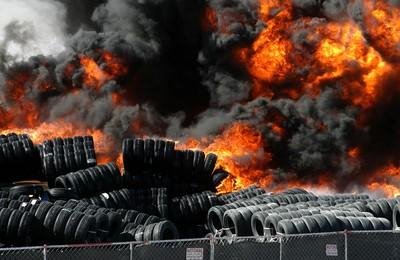 Scrap tires are used as a supplement to traditional fuels such as coal or wood fuel because of their high heating value. Typically, for each pound of scrap tire rubber burned it equates to 15,000 BTUs of energy and a single tire can burn for up to 50 minutes.  This equates to 25 percent more energy being produced than coal. Regardless of the efficiency, the fumes that are being released from tire burning have been shown to be extremely toxic to human health and harmful to the environment.

Why Tire Burning is Harmful for Public Health?

Both criteria and non-criteria pollutants can cause significant short and long term health effects.  Depending on the length and degree of exposure, these health effects could include irritation of the skin, eyes, and mucous membranes, respiratory effects, central nervous system depression, and cancer.  The EPA suggests that any unprotected exposure to these emissions be avoided.

Especially troubling is the exposure that children living within these communities are inadvertently being subjected to. Children, fetuses, nursing babies, elderly, asthmatics, and immune suppressed individuals are all much more vulnerable to the pollutants released burning tires. Even a nursing woman can transfer the pollutions she inhales to a baby through the fat in her breast milk. During breast-feeding, infants are exposed to higher concentrations of organic pollutants than at any subsequent time in their lives. Burning tires only adds to that toxic burden.

Saving money on fuel by burning tires should not take precedence over public health. Unfortunately, in small villages and other underdeveloped areas where tire-burning kilns sustain much of the local economy, exposure to these toxins is inevitable with the current practices being employed.

In addition to the negative effects tire burning has on the health of humans, it also has environmental costs that have not yet been discussed. The three main effects tire burning has on the environment is air, water, and soil pollution.  The air pollution caused from the tire-burning kilns is significant. The black fumes contain heavy metals and other harmful pollutants that linger in the air and can lead to acute to chronic health hazards. 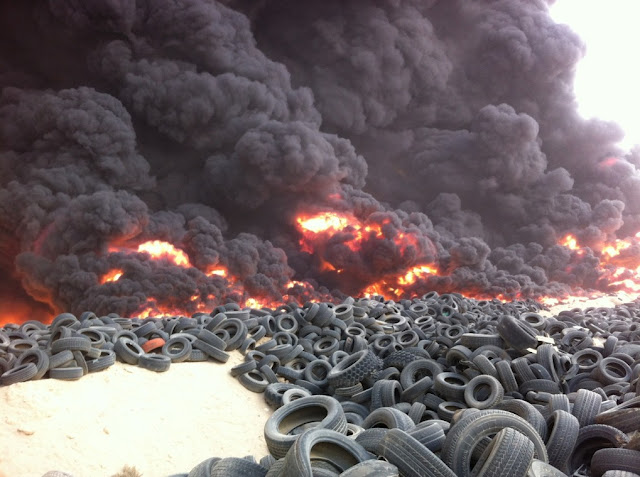 In terms of water and soil pollution, according to the EPA, “for every million tires consumed by fire, about 55,000 gallons of runoff oil can pollute the environment unless contained and collected”. If uncontained, this runoff can then be carried away by rainwater to local water sources contaminating them.

Additionally, the remaining residue can cause two types of pollution; these are immediate pollution by liquid decomposition products penetrating soil, and gradual pollution from leaching of ash and unburned residues following rainfall or other water entry.

While the burning of tires is not considered recycling, there is an argument regarding whether it is worse to landfill tires or reuse them to recover energy.  While even in the United States the Environmental Protection Agency (EPA) recognizes that the use of tire-derived fuels is a viable alternative to the use of fossil fuels, there are other factors that need to be considered.

For instance, in more developed areas of the world, regulations are in place such as the Clean Air Act which minimizes the amount of emissions being released by businesses as well as the fact that technology exists that can help clean and filter the emissions before they are released into the air.

On the other hand, in less developed areas of the world, environmental regulations and technology of this magnitude may not exist thus, exposing those citizens to more of the environmental and health related effects of uncontrolled tire burning.  While many factors contribute to either argument, all in all this particularly issue is under examined and results in the impairment of health and the safety of entire communities in the developing world.

Catherine Hansen is a returned Peace Corps volunteer and graduate from West Virginia University, where she studied for her Masters in Sustainable Development. She recently returned from a 27-month service in Morocco where she was serving as a Youth Development volunteer designing literacy, health, and environmental programming for youth in collaboration with local associations and volunteers. One of her main life goals is to share her passion for protecting the environment from human harm by bringing awareness to environmental issues that are often times over looked. Through outreach and education, Catherine hopes to inspire a refreshed appreciation for our natural world. She aims to begin her career in environmental services within the year.
View all posts by Catherine Hansen →
Tagged Air Pollution, burning tires, effects of uncontrolled tire burning, environmental impact of burning of tires, impacts of tire burning, Soil Pollution, tire fire emissions, tire-burning kilns. Bookmark the permalink.

6 Responses to The Harmful Impacts of Tire-Burning Kilns