Environmental Perceptions and Attitudes in Qatar – A Survey

Measuring environmental knowledge, opinion and attitude is of paramount importance to the academics and policymakers for developing better policies for human well-being and protection of ecosystems. Self-reporting attitudes and behaviours are one of the ways to measure.

A first-of-its-kind national opinion survey on environmental issues was conducted in 2016 in a series of three surveys including ten socio-demographic questions in each survey. The survey covered a wide range of topics from climate change to government policies to urbanization to food.

The results show a large number of people are deeply aware of the local and global environmental problems. Overall, the public has a positive ecological worldview. There is a general agreement that public is willing to make concessions in their lifestyles to mitigate the impact on the environment. However, not many are willing to take difficult actions.

Lack of information dissemination is rife. The public is least aware of the initiatives the government has taken to improve the environment. The government must do a lot to disseminate the information and critically evaluate the State of the Environment in Qatar regularly. 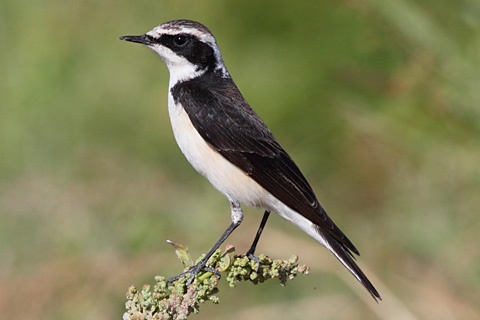 The environmental survey provides surprising findings on several issues that will help in developing policy interventions that could facilitate in transitioning to an environmentally conscious society in Qatar (target of NDS-I).

Background of the Survey

Environmental Development is one of the four core pillars of the Qatar National Vision 2030. The Vision lays the foundation for the sustainability of local ecosystem, judicious use of natural resources and minimize waste. To achieve this ambitious goal, the first National Development Strategy 2011-2016 set several targets to sustain the environment for future generations.

One of the key targets is to “build an environmentally aware society” and it is a precursor for successful environmental management in the country. To gauge the level of environmental awareness among the citizens and residents, Qatar Environment and Energy Research Institute (QEERI) initiated this study in partnership with the Ministry of Development Planning and Statistics (MDPS).

The environmental survey was intended to capture a current “snapshot” of attitudes related to Qatar’s environment and other related issues. The survey intends to contribute to the development of new policies or refining the existing policies and, potentially, to create new initiatives and programs to build an environmentally-conscious society.

The specific objectives of this survey were to

The surveys were divided into three parts and published online during February – November 2016. In total, there were 91 questions (Survey 1 -25; Survey 2 – 33; Survey 3 – 33) with extra ten sociodemographic questions in all three surveys. The sociodemographic variables used in the survey are similar to national census questionnaire except for the age category. The total number of respondents for three surveys were: 1,093; 753; and 963, respectively. The respondent’s age was above 17.

The survey finds that traffic congestion (62%) and air pollution (56%) are the two most significant environmental concerns of all in Qatar. More than one-in-four people believe depletion of natural resources (47%) and poor waste management (44%) also the areas of concern. Whereas issues such as desertification (19%), oil spills (20%), oil and gas depletion (24%) are not on high on public’s immediate concern. 70% of Qatari public view air pollution is the most pressing environmental concern of all in Qatar. Roughly half (49%) Qataris believe oil and gas depletion as a significant environmental problem than 22% of non-Qataris.

Desertification, sea water pollution tops the opinion list of Qataris than their counterparts. This indicates that Qataris have a general sense of understanding of the local concerns and expatriate community find it difficult to sense the urgency and importance. 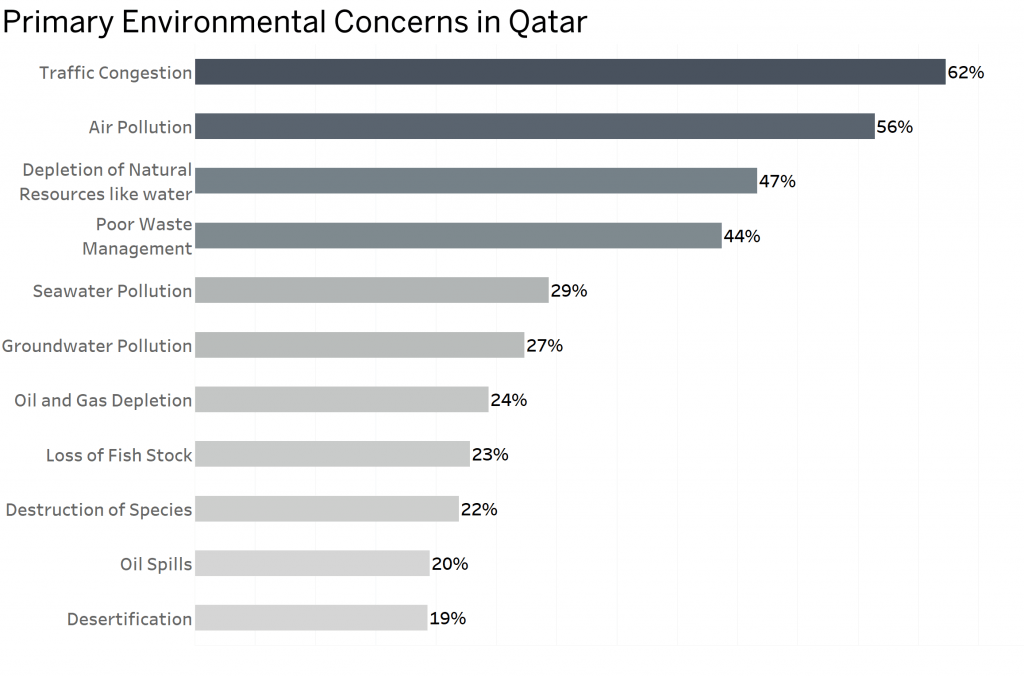 An overwhelming majority (80%) of public know a lot or fair amount about climate change and sustainable development. Four-in-ten (40%) of the public say they know a lot about climate change and 32% about sustainable development. However, many other important environmental terms are less familiar; 15% say the public never heard about ocean acidification and some 10% say the same about ecological footprint.

There are some wide differences in opinion about desertification. More (74%) Qataris say they know a lot or fair amount about desertification compared to only 48% of non-Qataris. Qataris can relate themselves to the loss of ‘green’ in the desert area. But the diverse group of non-Qataris can hardly able to relate to this problem. Therefore, they know very little about it.

Collectively, Qatar’s public (47%) view climate change is one of the pressing environmental threats of our time. This view is prominent among the younger generation. Water and air pollution (44%) and loss of natural resources (36%) rank equally high in public’s concern.  However, issues like loss of biodiversity (18%) and urbanization (17%) do not really rise high in public’s view.

Generally, the public has a positive ecological worldview; non-Qataris are more likely to exhibit pro-environmental attitude than Qataris. A notable share (88%) of public agree that the Earth has limited natural resources like freshwater, food, etc.

A staggering majority (92%) of public back the statement that the quality of life depends on the quality of the environment. A vast majority of the public (91%) agree that humans are severely abusing the environment. Roughly two-thirds (63%) of public find it unacceptable to deplete the natural resources or sacrifice environmental quality for economic growth. 87% of the public overwhelmingly agree (of which 60% strongly agree) that we need to make sacrifices in our excessive consumer lifestyles to reduce environmental problems. 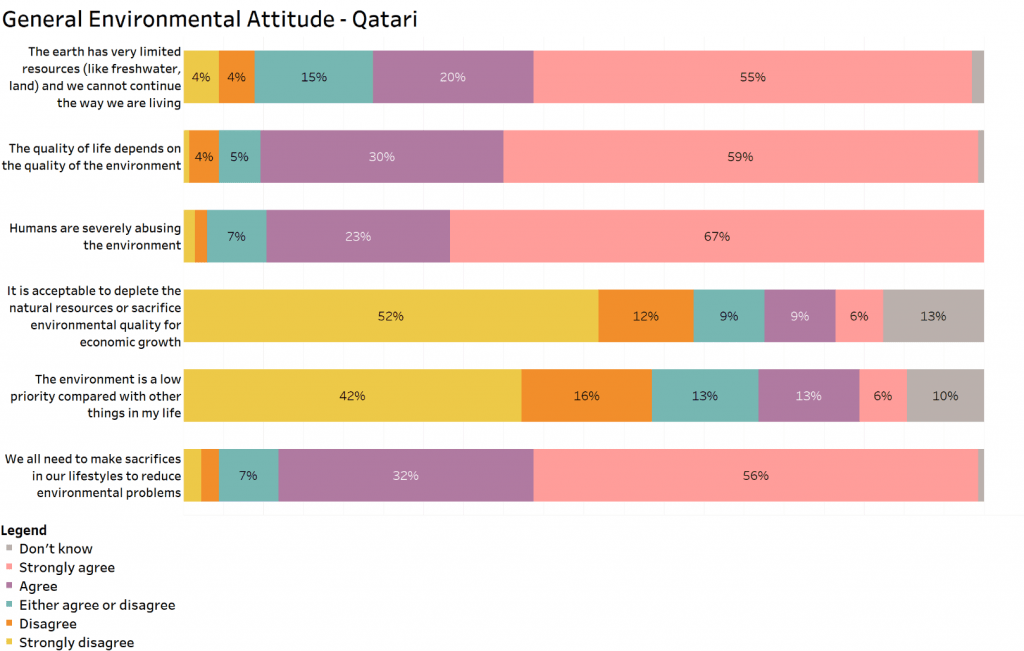 Note: This is first part of our special series on Environmental Awareness, Attitudes and Actions: A Baseline Survey of the Citizens and Residents of Qatar. The complete survey report can be downloaded from this link

6 Responses to Environmental Perceptions and Attitudes in Qatar – A Survey