Towards a Waste-Free Ramadan Iftar 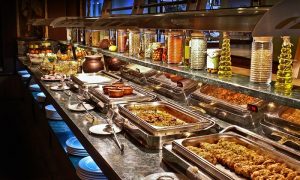 In the holy month of Ramadan, Iftar or breaking of fast becomes our main attention. The Iftars are either taken at home alone or with the family and relatives or at Iftar buffets at hotels and restaurants. The other option usually for the bachelors and less privileged people are to open the fast at mosques and at community centers whereby the iftar and dinner is provided for free organized by the rich, philanthropists, charitable organizations and mosque committees.

It is a common sight that at Iftar, people do not respect the food and drinks that are provided to them and leave it partly eaten/ consumed. At home, food which is cooked and provided is often been consumed and left overs are kept and re-utilized.

At mosques, Iftar plates or boxes are commonly being made which include dates, fruit pieces, samosa, pakoras, biryani and sweets. If open food is served in dishes and plates, it is often being shared between 4-6 people who partly eat the portions they like.

Iftar buffets at restaurants and hotels are no different than at mosques, where Iftar and dinner packages are being offered. In such cases also, there is huge wastage of food, as eating capability of the individuals are limited.

The great variety of iftar and dinner items tend to make people take more than required in their plates which later is thrown in waste bins. Restaurants and hotels provide buffets beyond our imagination, with an ‘all-you-can-eat’ spirit. If people knew what ‘all they could eat’, maybe less food would have been wasted. It is difficult to see that the food quantity run out.

At joint Iftar/ dinner gatherings at mosques, clubs and halls, more food is being provided irrespective of the number of people expected. At hotels and restaurants, food is amply being cooked for the fear that it may be fully consumed and where food availability contributes to the hotels’ reputation as running out of a specific dish would be every F&B manager’s worst nightmare. Thus, higher quantities of food/ dishes are being made.

Irony of the fact is that the leftover food is not allowed to be consumed by the hotel staff or given to charity and has to make its way to the garbage bins. The view of waste containers full of fresh and valuable food is very depressing especially for a country where most of the food items are imported and is expensive. Violation of the spirit of Ramadan

Wastage of food is a sin and a violation of the very concept of Ramadan. The act of throwing away food during Ramadan is a complete contradiction to the philosophy behind fasting. Quran says food waste must be prevented and mention, “Eat and drink, but be not excessive. Indeed, He likes not those who commit excess.”

So let us not waste the food. If surplus food is remaining, it should be packed and send/given to deserving people. We also need to make sure the quality and safety of the donated food. Another viable option to reduce food wastage is by recycling.

Let us be more vigilant and not waste any food waste or drinks. We need to think twice before putting any food waste to the garbage bin. Each individual’s contribution counts.

Let us save our environment.

One Response to Towards a Waste-Free Ramadan Iftar