Restocking the Seas around Bahrain through Fish Farming

The marine waters around Bahrain have been showing a decline in fish stock for several decades. But in the first decade of this millennium, restocking has become a routine practice endorsed by the former Public Commission for the Protection of Marine Resources, Environment and Wildlife (now the Supreme Council for the Environment). In recent years, the fishing industry in the Kingdom of Bahrain is starting to really look up with the restocking of the waters from farmed fish. 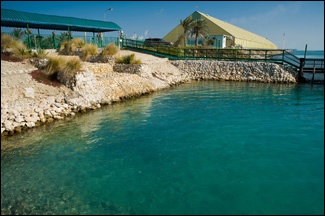 Requirements of a Fish Farm

Fish farming means growing fish in fixed enclosures (tanks, ponds or cages) exposed to the natural climatic conditions of the environs. As part of aquacultural activities (another term for fish farming), one needs to replenish fish stock preferably before the fish species dwindle to almost extinction.

The basic requirements for a healthy fish farm address a number of chemistry-related characteristics. There must be good water circulation which is achieved through tidal action resulting in water velocity in the range of 10-60 cm/sec.  The oxygen level needs to be maintained at the optimum level of  >5ppm while salinity level should approach 49,000ppm. Water temperatures vary with the season and with tidal levels. The range, therefore is between 12 oC  at lowest tide in winter up to 37oC in the peak of summer. Fish prefer alkaline water levels. This can vary with fish species.

For example, Shim (Bream) prefer the pH level to range within 8.2 -8.5. Wind and wave action should be minimal. This is best achieved by locating fish farms downwind of the dominant wind direction which means off the east coast of the island. GPIC is located on the right side of the island with a relatively sheltered site for the fish farm.

Fishes, such as bream, are released into the fish farm on reaching the juvenile stage (i.e when the body weight is around 70gm). The ideal fish weight, 210gm is achieved over the next 220+ days. Population density is very critical in fish farming with an ideal number of 7 fishes/m3. The fishes are fed a supplemental diet of dry food pellets.

The feeding rate is in the range of 3-7% of the fish’s body weight.  So careful monitoring of the fish is really important. This amount of food supplements is spread out over four feedings in one 24-hour period. Feeding amounts can also be influenced by climatic conditions, thermal properties of the water and the current flow rate. 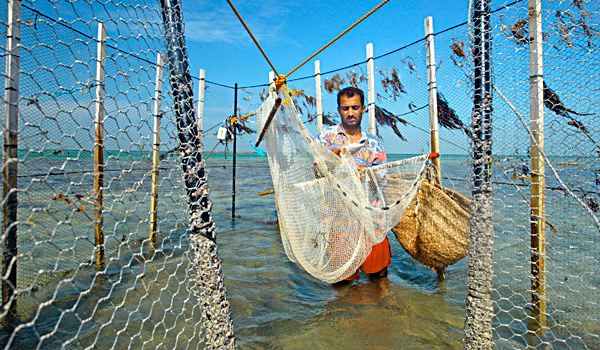 The fishes are monitored and their growth rate and general performance are all recorded. The average fish body weight is assessed every 15 days. It has been observed that the maximum growth rate is achieved when the water temperatures are at 23oC.

As well as monitoring the fish themselves, the environs must also be kept in check. Submerged physical features need to be kept free of any buildup of rough, sharp materials that could harm or injure the young fish. Too many barnacles growing on a structure could cause the subsurface structures to break off.  The enclosure could be damaged resulting in an opening through which the farmed fish might escape prematurely out into the open ocean.

Farmed fish can easily catch diseases. This typically happens when or if the density of the stock gets too high.  Fish can get a variety of diseases so much care is taken to protect the whole project.

Fishes are harvested using such as a dragnet, sieving or a Gill net.  A dragnet is a seine method of fishing where the net hangs vertically in the water with weights holding the bottom down and floats keeping the top floating.  Gill nets are also vertical nets that trap fish via their gills being caught in the net.

The Gulf Petrochemical Industries Company (GPIC) fish farming activities began in 1996 with a capacity of 10,000 fish. An area of 625 sq. meter forms part of the natural marine environment surrounding the industrial location, has been turned into a fish farming area. The three main species raised in the farm are Black Sea Bream (Shim), Mullet (Meid) and Rabbit Fish (Saffee).  By 2001, the capacity had increased to 30,000 fish. By 2012, capacity had reached 80,000 fish, and by 2015 100,000 fish.

The restocking of the surrounding waters has long been carried out by GPIC as part of their CSR initiatives. Each year, the company releases batches of sea bream into the local waters to replenish the fish stocks of the surrounding marine areas.  In August, 2008, 80,000 hamour and 20,000 subaiti bream, weighing between 80-100gm, were released into the sea. Today the capacity of fishes released to restock the surround marine waters stands at 100,000 fishes. (GPIC Sustainability Report, 2014, Building a Greener Future, 156pp).

2 Responses to Restocking the Seas around Bahrain through Fish Farming