Miswaak is an organic toothbrush which is readily available, inexpensive, easy-to-use and inherently natural. It is can be easily adopted by Muslims as well as people from other faiths as an attractive green alternative to the modern toothbrush for maintaining oral hygiene. Miswaak or Siwak is the Arabic common name for twigs of Aarak trees (botanical name Salvadora persica). The use of the Miswaak can be traced back to the pre-Islamic times; hence, the influence of Islam on the usage and spread of Miswaak in the world is significant.

Muslim Miswaak users have taken it as a device that should be used as a part of their religious ritual regimen for more than 1400 years. According to Hadith, Miswaak is a valuable tool for the maintenance of mouth cleanliness and good oral health. Many other health benefits including memory and eye sight enhancement, digestion aid, headache relief, and molar pain elimination have been attributed to Miswaak. 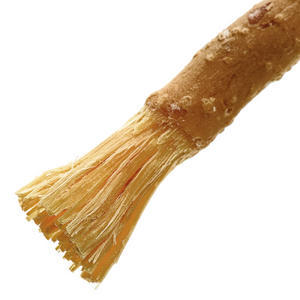 The therapeutic and pharmacological aspect of Miswaak has been well documented. Several scientific research have shown that Miswaak, if properly used, is an excellent anti-microbial toothbrush for oral hygiene and gum inflammation treatment, reducing plaque and gingivitis, whitening teeth and eliminating bad breath, whilst providing a pleasant mouth smell.

It has proven that the Miswaak has beneficial ingredients which are not normally found in toothpastes with anti-cariogenic and anti-inflammatory hypoglycemic activities. Miswak offers a unique combination of chemical active material and mechanical techniques.

The Miswaak method has received global acceptance. World Health Organization encourages and recommends the use of chewing sticks as an effective oral hygiene tool in areas where it is customary. Commercially speaking, some countries such as Saudi Arabia, Egypt, Swiss, India, Pakistan and Malaysia have produced toothpaste containing Salvadora Persica extracts.

Surprisingly, despite the widespread use of Miswaak since ancient times, the environmental aspect of Miswaak has never been examined. As a result of the long-existing tradition for Miswaak use as an oral hygiene instrument in Muslims countries, Miswaak offers a unique environmental friendly technique for performing oral health and hygiene.

Miswaak is an environmental friendly, organic and economic method in dental hygiene due to the fact that it is readily available, and it does not need expertise or any extra resources to manufacture it. Hence, it generates zero wastes, consumes the least amount of water, and uses the natural solar energy solely during the production process. Same is applicable during the utilizing and discarding processes after consumption due to its organic nature.

S. persica is a widespread highly salt tolerant plant. The tree is able to tolerate a very arid environment with mean annual rainfall of less than 200 mm. S. persica is a multipurpose plant; various parts of the plant are used as: fruits, food, fodder, and lipids source, gum as well as resins. Additionally, it is also used as a honey bee rearing plant.

S. persica is planted in several parts of the Arabian Peninsula not only for using its branches as a natural toothbrush, but also for consuming the plant itself as shelterbelts and windbreaks to protect farm horticultural crops and habitation. In the same way, the S. Persica plantation can help in the reclamation of sand dune habitat; it is functional for reclaiming saline soils as well.

Nura A. Abboud is an environmental activist and Founder of the Jordanian Society for Microbial Biodiversity (JMB), the only NGO in the Middle East concerning the microbial biodiversity. Nura specializes in molecular biology, biological sciences, microbial biodiversity, genetic fingerprinting and medical technologies. Her vision is to establish an eco-research center in the astonishing desert south of Jordan. She has received several scholarships and awards including honorary doctorate in Environmental leadership.
View all posts by Nura A. Abboud →
Tagged Advantages of Miswaak, Arab, Arabia, Benefits of Miswaak, Hygiene, Islam, Miswaak, Muslims, Public Health, Salvadora persica, Siwak, Toothbrush Tree, What is Miswak. Bookmark the permalink.

3 Responses to Miswaak – The Natural Toothbrush Tree of Arabia