Waste-to-energy is the use of modern combustion and biological technologies to recover energy from urban wastes. The conversion of waste material to energy can proceed along three major pathways – thermochemical, biochemical and physicochemical.

Thermochemical conversion, characterized by higher temperature and conversion rates, is best suited for lower moisture feedstock and is generally less selective for products. On the other hand, biochemical technologies are more suitable for wet wastes which are rich in organic matter.

The three principal methods of thermochemical conversion of MSW are combustion (in excess air), gasification (in reduced air), and pyrolysis (in absence of air). The most common technique for producing both heat and electrical energy from wastes is direct combustion. Combined heat and power (CHP) or cogeneration systems, ranging from small-scale technology to large grid-connected facilities, provide significantly higher efficiencies than systems that only generate electricity.

Combustion technology is the controlled combustion of waste with the recovery of heat to produce steam which in turn produces power through steam turbines. Pyrolysis and gasification represent refined thermal treatment methods as alternatives to incineration and are characterized by the transformation of the waste into product gas as energy carrier for later combustion in, for example, a boiler or a gas engine. Plasma gasification, which takes place at extremely high temperature, is also hogging limelight nowadays.

Biochemical processes, like anaerobic digestion, can also produce clean energy in the form of biogas which can be converted to power and heat using a gas engine. Anaerobic digestion is the natural biological process which stabilizes organic waste in the absence of air and transforms it into biofertilizer and biogas.

Anaerobic digestion is a reliable technology for the treatment of wet, organic waste.  Organic waste from various sources is biochemically degraded in highly controlled, oxygen-free conditions circumstances resulting in the production of biogas which can be used to produce both electricity and heat. 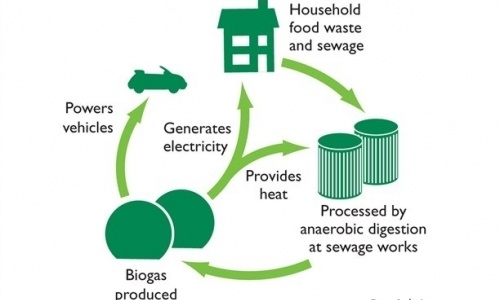 In addition, a variety of fuels can be produced from waste resources including liquid fuels, such as ethanol, methanol, biodiesel, Fischer-Tropsch diesel, and gaseous fuels, such as hydrogen and methane. The resource base for biofuel production is composed of a wide variety of forestry and agricultural resources, industrial processing residues, and municipal solid and urban wood residues. Globally, biofuels are most commonly used to power vehicles, heat homes, and for cooking.

The physico-chemical technology involves various processes to improve physical and chemical properties of solid waste. The combustible fraction of the waste is converted into high-energy fuel pellets which may be used in steam generation. The waste is first dried to bring down the high moisture levels. Sand, grit, and other incombustible matter are then mechanically separated before the waste is compacted and converted into pellets or RDF.

Fuel pellets have several distinct advantages over coal and wood because it is cleaner, free from incombustibles, has lower ash and moisture contents, is of uniform size, cost-effective, and eco-friendly.

Salman Zafar is the Founder of EcoMENA, and an international consultant, advisor, ecopreneur and journalist with expertise in waste management, waste-to-energy, renewable energy, environment protection and sustainable development. His geographical areas of focus include Middle East, Africa, Asia and Europe. Salman has successfully accomplished a wide range of projects in the areas of biomass energy, biogas, waste-to-energy, recycling and waste management. He has participated in numerous conferences and workshops as chairman, session chair, keynote speaker and panelist. Salman is the Editor-in-Chief of EcoMENA, and is a professional environmental writer with more than 300 popular articles to his credit. He is proactively engaged in creating mass awareness on renewable energy, waste management and environmental sustainability in different parts of the world. Salman Zafar can be reached at salman@ecomena.org or salman@bioenergyconsult.com
View all posts by Salman Zafar →
Tagged Anaerobic digestion, Biochemical Conversion Systems, Electricity, MSW, organic wastes, Physico chemical Conversion of MSW, RDF, Thermochemical Conversion Technologies, Urban Wastes, Waste to Energy Conversion Routes, Waste to Energy Pathways, Waste-to-energy, Wastes. Bookmark the permalink.