Sustainable Cattle Farming: Is It Possible?

Cattle farming is often linked to climate change and pollution. As the Food and Agriculture Organization of the United Nations pointed out in a report from 2013, cattle emit the biggest percent of methane out of all livestock.

The most evident solution to this problem is for the population to consume less beef and dairy. However, according to statistics, the per capita meat consumption has gradually increased since 1961 and this tendency is not likely to change. As countries get richer, their population will keep eating more and more meat. So, is sustainable cattle farming a possibility? 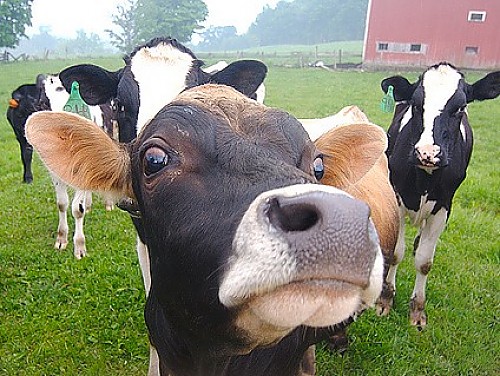 As its name suggests, regenerative agriculture focuses on rehabilitating the natural resources used in agriculture so that food production is more sustainable. In essence, RA aims to create long-term agricultural ecosystems.

The importance of healthy land is bigger than it first meets the eye. The specialists argue that healthy land can capture excess carbon through a process known as soil carbon sequestration and, thus, this can help reduce climate change.

How cows come in play

Even though they are currently regarded as the biggest pollutants, cows can actually play a big role in regenerative agriculture. By giving up on indoor feeding and opting for outdoor alternatives such as pastures, cows can actively restore the soil.

Pasture farming is beneficial because it allows the animals to do the work, as their manure acts as a natural, organic fertilizer. Some studies show that this type of farming leads to trapping of more carbon dioxide in the soil. Good grazing management is also profitable for farmers as they have to pay less when it comes to feeding costs.

Apart from being eco and economically friendly, providing cattle with daily grazing time is also good for the wellbeing of the animals as they are less likely to get sick. Cows farmed on pastures are also less stressed and they get to engage in natural behaviors. As a result, cows are likely to produce more milk. If you are a farmer looking for a new milking machine, you can find an affordable one at just one click away.

As good as it sounds, regenerative agriculture is not the magical solution that some might hope it to be. In the US alone, in 2019, there were no less than 94.8 million cattle and calves and only 654m acres of pasture.

Because, on average, each cow needs 1.5 to 2 acres of land, this type of cattle farming is not the answer to the problem.

As hard as it might be to accept this, the only viable solution that we have to reduce climate change is to reduce our meat consumption practices. In the last decade (1994 to 2014), studies have shown that only one to two percent of the adult population had permanently adhered to a plant-based diet. However, statistics show that from 2014 to 2017, this percentage rose by 600%.

In an attempt to live a more sustainable, greener life, more and more people have shown a real interest in opting for vegan meals at least once a week. This change was greatly influenced by the fact that now, veganism is seen as a trend in the US. Cell-cultured meat is also in the spot light these days due to its potential to provide cruelty-free non-vegetarian food.

There are three reasons why more and more Americans opt for a plant-based diet. While some of them choose this change in lifestyle as a stance against animal abuse and as a response to the environmental issues, the most common reason is linked to the benefits that veganism has on one’s health.

A study by the National Center for Biotechnology Information showed that both vegans and vegetarians have a lower BMI. Giving up meat and animal products brings along a couple of extra benefits, such as protection against obesity, heart disease, and diabetes.

To cater to the needs of this segment of the population, restaurants have now started to offer convenient alternatives for vegans and vegetarians. Still, maintaining a vegan diet is still not affordable to all citizens due to the additional costs that such a diet entails. Veganism is still a luxury that only a small percentage of people can actually afford.

This shift towards opting for vegan products can also be linked to an increase in the number of people who suffer from allergies and dietary restrictions. According to the National Digestive Diseases Information Clearinghouse, around 30 to 50 million Americans are lactose intolerant. Even more so, six in ten households report that there is at least one member that restricts form certain foods.

Salman Zafar is the Founder of EcoMENA, and an international consultant, advisor, ecopreneur and journalist with expertise in waste management, waste-to-energy, renewable energy, environment protection and sustainable development. His geographical areas of focus include Middle East, Africa, Asia and Europe. Salman has successfully accomplished a wide range of projects in the areas of biomass energy, biogas, waste-to-energy, recycling and waste management. He has participated in numerous conferences and workshops as chairman, session chair, keynote speaker and panelist. Salman is the Editor-in-Chief of EcoMENA, and is a professional environmental writer with more than 300 popular articles to his credit. He is proactively engaged in creating mass awareness on renewable energy, waste management and environmental sustainability in different parts of the world. Salman Zafar can be reached at salman@ecomena.org or salman@bioenergyconsult.com
View all posts by Salman Zafar →
Tagged Cattle Farming, Cows, Food Production, Livestock, Meat Consumption, Pasture Farming, Sustainable Agriculture, Sustainable Cattle Farming, Veganism, What is Regenerative Agriculture. Bookmark the permalink.

One Response to Sustainable Cattle Farming: Is It Possible?